The co-feature on on Whitney day at Saratoga was the $500,000 Longines Test Stakes (G1) for 3-year-old fillies sprinting 7 furlongs on the main track. Despite overnight rains, the track was still officially fast for this event, as additional rains fell before the Whitney. Last year's Frizette (G1) winner Separationofpowers was sent off as the 9-4 favorite off 4th place finishes in the Breeders' Cup Juvenile Fillies (G1) and the Victory Ride (G3). In to challenge her included 7-2 Mia Mischief, winner of the Eight Belles (G2) before 5th in the Victory Ride, and 7-2 Alter Moon, winner of the Azalea. 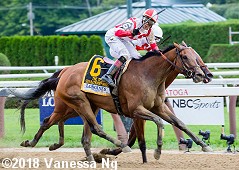 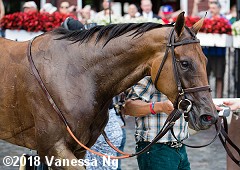 Left: Separationofpowers in the winner's circle. Winning trainer Chad Brown said, "It was a thrilling stretch run. I feel so fortunate she came out on top. She showed her heart and determination. I'm just so proud of my filly, how she showed so much heart to come out on top there. I thought Jose [Ortiz] rode such an outstanding race from start to finish. They're a good combination those two."

Right: Separationofpowers heads back to the barn. 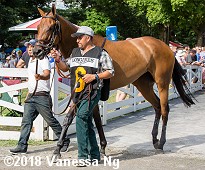 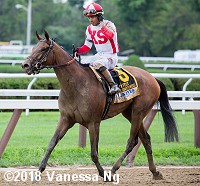 Left: Separationofpowers in the paddock. Winning jockey Jose Ortiz said, "Last time, she stumbled real bad. She broke clean today and she had a huge chance to win the race and she did. I tried to keep her clean, have a clean trip in the turn. I went a little bit wider than I wanted to, but I didn't get in trouble because she had a good shot. I just rode her like the best horse and I'm glad everything worked out."

Right: Separationofpowers returns after the race. Brown added, "To bring her back to her race at Belmont and to have her stumble so bad out of the gate (in the Victory Ride), she came back a little banged up. She grabbed her quarter, had a bunch of scratches all over her. I actually wasn't sure I'd make the Test with her. Then she came around a couple of weeks later, started breezing again, got to feel her health again, and we came back with a beautiful clean break and a good run. I'd love to stretch her back out. She showed last year in the Frizette that she can go farther than seven furlongs. I'm not exactly sure which race yet, we'll enjoy this win and make sure she's healthy." 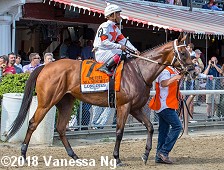 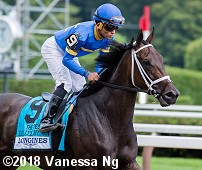 Left: Second place finisher and beaten favorite Mia Mischief heads out to the track before the race. Trainer Steve Asmussen said, "She ran a really good race. She got beat by a Grade 1 winner and obviously, we'd like the outcome to be about a neck different, but we're very proud of the filly and we're honored to have her." Jockey Ricardo Santana Jr. added, "She ran her race, she ran a good race, the best horse beat me. Nothing more than I could do."

Also on the card: The Whitney and De La Rose Stakes