On Sunday, a field of 6 older fillies and mares contested the $500,000 Flower Bowl Stakes (G1) at Belmont Park, a "Win and You're In" qualifier for the Breeders' Cup Filly and Mare Turf, contested at 1 1/4 miles over the inner turf course. Conditions were cloudy with temperatures in the low 70's, after morning rains downgraded the main track to good but the turf courses remained firm. Grand Jete was sent off as the 11-10 favorite off her second place finish in the Beverly D (G1) at Arlington. In to challenge her included 8-5 second choice Zhukova, winner of the Man O'War (G1) but 8th in the Irish Champion (G1) last out, and 4-1 third choice Dacita, winner of the Beverly D. 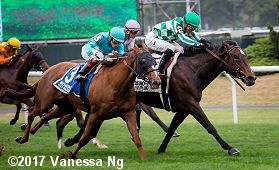 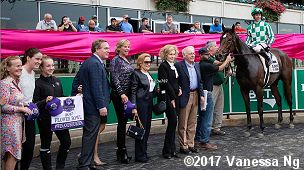 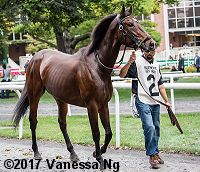 Left: War Flag in the winner's circle. Winning trainer Shug McGaughey said, "1 1/4 miles wasn't a problem today. She grinded it out. Jose rode a great race on her and had her in perfect position. I thought maybe (Beauly) would go with the blinkers on. I just told him to ride his race. From the Glens Falls to here, she came into the race really well. So, we were confident that she would run a good race. Whether it was good enough or not you never know. I have never been to Del Mar so I can't comment on the turf course out there, but I think she'd probably like the California turf course, you know the way they get over the ground the way they do. She's got some tactical speed, we saw today where she can kind of be up in the race. Hopefully she will come out of it good and we will be able to make the trip."

Right: War Flag in the paddock. Winning jockey Jose Ortiz said, "Grand Jete and (Zhukova) went on, and it was a perfect set up for me. I sat right behind them and when I was ready to move, I got clear on the other side. It was a small field, I had no problems. It was perfect. Grand Jete ran well in (Beverly D) and Dacita won it, and I was surrounded by those two. My filly ran hard in the last 1/16, she pinched her ears and just kept trying and thank God she hit the wire first. The turf feels really good today. It's not firm, like rock hard, but it's good. She handled everything great. I saved as much ground as I could and when it was time to move at the three-eighths pole, the two horses in front of me and Dacita were the ones I had to beat and I saw the 4 horse tapping on the shoulder already so I knew he didn't have horse. I knew I had to keep the pressure on Grand Jete and I made my move and thankfully, we got there." 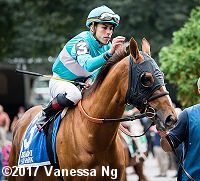 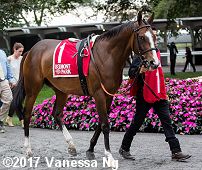 Left: Second place finisher Dacita heads out of the paddock. Trainer Chad Brown said, "Dacita ran well once again, she just was on the short end with the ground, but she never lets us down, she pretty much fires as long as it's not Keeneland." Jockey Irad Ortiz Jr. added, "I had a perfect trip. No excuses."

Right: Third place finisher and beaten favorite Grand Jete in the paddock. Trainer Chad Brown said, "Didn't really know what to do really, gave Javier (Castellano) the option if he wanted the lead. The first half mile was crawling, then it picked up and given the ground today, and quarters in twelve, I thought she might run a little bit with the softish ground, but it's too bad."


Kicking off the stakes action on Saturday, the distaff counterpart of the Champagne is the $400,000 Frizette Stakes (G1) for 2-year-old fillies going 1 mile on the main track, looking for an automatic entry into the Breeders' Cup Juvenile Fillies. Separationofpowers was the 2-1 favorite in the field of 10 off her third place finish in the Spinaway (G1) at Saratoga. In to challenge her included 7-2 second choice Critique, a maiden winner by 16 lengths at second asking last out, and 4-1 third choice Maya Malibu, second in the Spinaway.

Jockey Irad Ortiz Jr. sent 10-1 Strategic Dreams to the lead exiting the chute through fractions of 23.26, 46.95, and 1:11.88 over the good main track while pressed by 11-2 Purrfect Miss and stalked by Separationofpowers. Turning for hoe, jockey Jose Ortiz sent Separationofpowers to the front and she quickly opened up a 2 length lead through 7f in 1:25.42. Kept to task by Ortiz, Separationofpowers continued to pull away late, finishing 3 1/2 lengths clear of late-running 8-1 Caledonia Road in 1:38.66. It was a long 8 1/4 lengths back to Maya Malibu third. 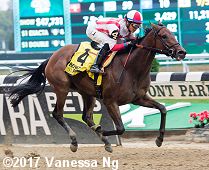 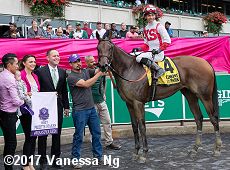 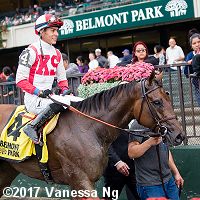 Left: Separationofpowers takes her walk down Victory Lane. Winning trainer Chad Brown said, "She drew the rail in the Spinaway. She had gone wire-to-wire in her debut, so she was kind of forced. She's always trained kind in the morning and she's a real easy horse to be around. We're confident (in the Breeders' Cup). I know it's a tough division, there's some horses out west who look very good. This horse always gave us the impression she would be better around two turns. You look at her pedigree and you look at her physically, how much she's grown through the course of this summer, I'm excited to get her around two turns."

Right: Separationofpowers in the winner's circle. Winning jockey Jose Ortiz said, "She broke really well and I had an opportunity to put her in the clear early and I think that was the key to win the race. I put her in the clear and we went three-wide the whole way. We went easy, 46 seconds. The track is a little slow so I don't pay attention to the 1:38. She's a little green when she's around horses, but once she passed them, she jumped in the bit and gave me everything she had. 1 1/16 miles (Breeders' Cup) I think would be fine." 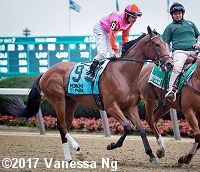 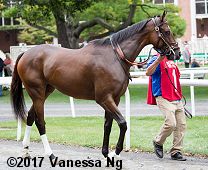 Left: Second place finisher Caledonia Road in the post parade. Trainer Ralph Nicks said, "She broke kind of flat-footed, and she took the worst of it a lot of dirt. Maybe if she cuts the corner turning for home she's a little closer, but she galloped 1 1/2 lengths from the winner, and she kind of out sprinted her from the 1/8 pole to the 1/16 pole. She galloped out, so at the end of the day. she's a very nice horse. She took all the dirt. She didn't have the best of trips for a second-time starter, but she made the second-time starter mistake leaving there. I think maybe the Demoiselle here or the Golden Rod at Churchill would be more logical, but we'll play it by ear and go from there."

Right: Third place finisher Maya Malibu in the paddock before the race. The Graham Motion trainee improved her record to 1 win, 1 second, and 1 third in 3 starts, earning $130,400 for owner-breeder My Meadowview Farm LLC.