The feature race at Belmont Park on Saturday was the $400,000 Man o'War Stakes (G1), a 1 3/8 mile inner turf contest for older horses, contested over yielding going under steady rain, fog, and temperatures in the low 50's. After 3 scratches, just 5 went to post with the mare Zhukova sent off as the 9-10 favorite, making her first U.S. start after winning the Noblesse Stakes at Cork in Ireland. In to challenge her included 5-2 second choice Wake Forest, winner of the Mac Diarmida (G2) at Gulfstream, and 7-2 third choice Sadler's Joy, winner of the Pan American (G2). 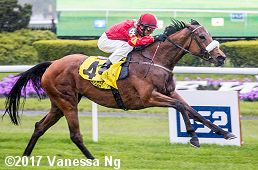 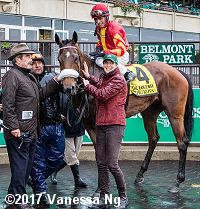 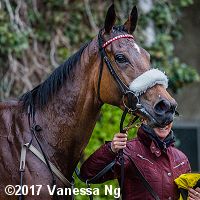 Left: Zhukova in the winner's circle. Mark Weld, assistant to his father, winning trainer Dermot Weld said, "I was concerned with the fractions; my big fear is that it would happen and that she would get caught. But her class won out. She's a true European Grade 1 mare. We're absolutely over the moon with that. It was a major target over the last few weeks. The rain came, which was a huge help. Johnny was very complimentary about her. He said she could have a future here. She'll come home now but the Breeders' Cup Filly and Mare Turf would be a definite possibility to finish off the year. We have the Yorkshire Oaks in August. We won the Grade 1 now - so she can have a free pass for the rest of the year."

Right: Zhukova heads back to the barns after the race. Winning jockey John Velazquez said, "She gives you so much confidence. She broke well and there wasn't much speed in the race. They told me she likes to be close to the pace and with no pace at all I knew she was going to break great and be right there. She handled the grass really well and coming from Europe you could tell she was used to this type of surface. When I asked her to run down the lane she had another gear." 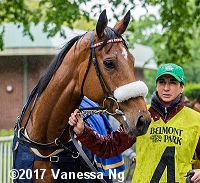 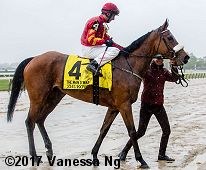 Left: Zhukova in the paddock. Weld added, "We've known she's a good mare for a little while. You don't beat the Breeders' Cup winner Found very easily, and she beat her pretty handily in the Alleged Stakes. She's a homebred; we've had her since she was a foal bred by my grandmother. This is huge for us today. We have a lot to look forward to."

Right: Zhukova returns after the race. 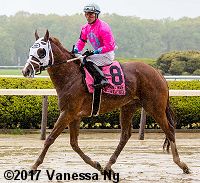 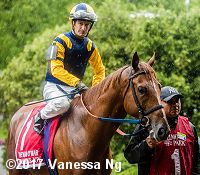 Left: Second place finisher Taghleeb returns after the race. The Mike Maker trainee has a record of 6 wins, 5 seconds, and 4 thirds in 27 starts, earning $538,029 for owner Michael Hui.

Right: Third place finisher Sadler's Joy heads out of the paddock. The Tom Albertrani trainee has a record of 4 wins, 1 second, and 1 third in 9 starts, earning $342,968 for owner-breeder Woodslane Farm.


The second stakes race on the card was the $150,000 Beaugay Stakes (G3) for older fillies and mares going 1 1/16 miles on the Widener turf course. Canadian Stakes (G2) runner-up Dacita was sent off as the 2-1 favorite in the field of 6. In to challenge her included 5-2 second choice Time and Motion, 6th in both the Matriarch (G1) and Jenny Wiley (G1), and 3-1 third choice Rainha de Bateria, winner of the last year's Canadian Stakes (G2) but fifth in the last year's E.P. Taylor (G1).

Jockey Julien Leparoux sent 7-2 third choice Hawksmoor to the front exiting the chute and she set fractions of 25.45, 51.20, and 1:16.95 over the yielding course whle pressed by 15-1 All in Fun and stalked by 13-1 My Sweet Girl. Entering the lane Hawksmoor continued to lead through 1 mile in 1:42.25. Dacita, last early, came out 3 wide for room and rallied well late but Hawksmoor held her off to win by a head in 1:48.91 It was another 3/4 length back to Time and Motion third. 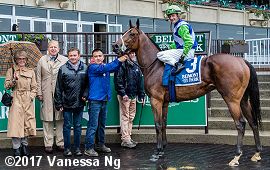 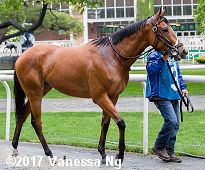 Left: Hawksmoor in the winner's circle. Winning trainer Arnaud Delacour said, "I was kind of hoping we could have soft turf and obviously the weather was with us. I told Julien I didn't think there was that much speed. She's obviously has run very well on the soft before in that kind of way, so we were trying to do the same thing today. Towards the finish, Dacita came on like she was going to pass us but our filly is a little deceiving. She was kind of looking around a little bit, that's why she had blinkers, but she kept coming and she tried hard. I was real pleased with that. I was very happy she put on a good performance off the layoff. She's had been breezing very well."

Right: Hawksmoor in the paddock before the race. Winning jockey Julien Leparoux said, "Early in the race she was very relaxed and very comfortable on the lead. I tried to get her going pretty early. She fought back when she felt Dacita coming on the outside. She was very comfortable on (yielding turf). I was confident about that. But it was a good bunch of fillies behind her. I was expecting Dacita to come and she fought them back." 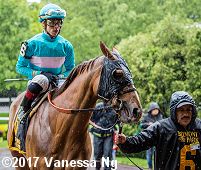 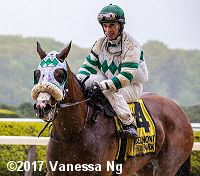 Left: Second place finisher and beaten favorite Dacita heads out of the paddock before the race. The Chad Brown trainee has a record of 9 wins, 4 seconds, and 1 third in 17 starts, earning $1,042,769 for owners Sheep Pond Partners and Bradley Thoroughbreds.

Right: Third place finisher Time and Motion returns after the race. The James Toner trainee has a record of 5 wins, 1 second, and 2 thirds in 12 starts, earning $940,829 for owner-breeder Phillips Racing Partnership.