The $700,000 Suburban Stakes (G2) features the top older handicap horses of the east going 1 1/4 miles on the Belmont Park main track, in an early prep for the Whitney Handicap (G1), Jockey Club Gold Cup (G1), and ultimately the Breeders' Cup Classic (G1). Last year's Belmont Stakes (G1) winner Tapwrit was sent off as the lukewarm 3-1 favorite in the field of 10 off a 3rd place finish in allowance company. In to challenge him included 7-2 second choice Hoppertunity, winner of the Brooklyn (G2), and 15-4 third choice War Story, 2nd in both the Brooklyn (G2) and Charles Town Classic (G2). 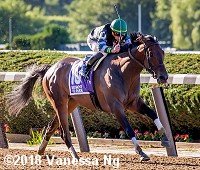 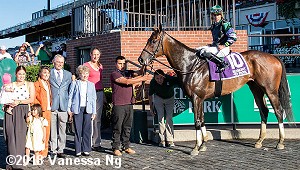 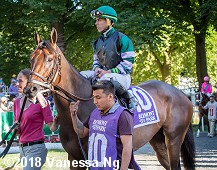 Left: Diversify in the winner's circle. Winning trainer Rick Violette said, "I was surprised that we were pressed by horses other than Dr. Door. We were meant to be aggressive and Irad told me when he realized it was Zanotti and War Story he kind of just stepped on the gas. He did it pretty comfortably. I think this is his best race ever. He beat some nice horses, withstood some serious pressure, fast fractions and he obviously loves Belmont. We have five weeks to the Whitney off his lifetime best I think. There's also the Woodward four weeks later in the meet. We'll think about the fall as well. We would love to do the Whitney, but we'll see how he comes back from this effort."

Right: Diversify in the paddock before the race. Winning jockey Irad Ortiz Jr. said, "My plan was to break and go. I broke good, I sent him, and he took me the whole way. He was traveling perfect. I just went from there and started moving and he responded very well. He went fast, and he gave me another gear at the quarter pole." 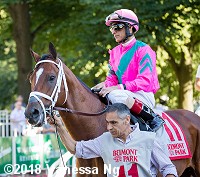 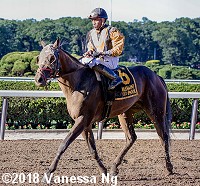 Left: Second place finisher The Lieutenant in the paddock before the race. The Mike McCarthy trainee improved his record to 4 wins, 2 seconds, and 1 third in 13 starts, earning $339,537 for owners Mr. and Mrs. William K. Warren Jr. 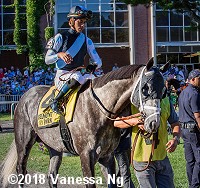 Fifth place finisher and beaten favorite Tapwrit in the paddock before the race. The Todd Pletcher trainee has a record of 4 wins, 1 second, and 1 thirds in 11 starts, earning $1,267,402 for owners Eclipse Thoroughbred Partners, Robert LaPenta, Bridlewood Farm, Gainesway Stable, and Whisper Hill Farm.

Jockey John Velazquez sent Noble Indy to the front through fractions of 23.53 and 45.98 while pressed by Mendelssohn and stalked by 9-2 fourth choice Rugbyman. Entering the lane, Mendelssohn gained a short lead through 3/4 in 1:09.82. However, Firenze Fire, 5th early under Jose Ortiz, came out 4 wide for room and easily took over at the 3/16 pole through 7f in 1:21.75. Kept to task by Ortiz, Firenze Fire powered away through the stretch to win by 9 lengths over late-running 10-1 Seven Trumpets in 1:33.74. It was another 1/2 length back to Mendelssohn third. 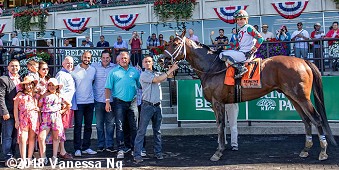 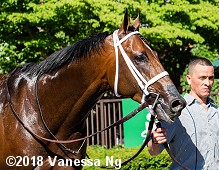 Left: Firenze Fire in the winner's circle. Winning trainer Jason Servis said, "That was great. I've been dying to cut him back, just dying. We thought he'd run good. We got on the Derby trail like you're supposed to do. Do we think he's a 1 1/4 horse? Probably not. But, now we're getting him where he needs to be, a mile, 7/8, where he might even be a tad sharper. I mean, it all worked out. We're all real happy. The Allen Jerkens, which used to be the King's Bishop, at 7/8, is something we'll keep an eye on." Owner Ron Lombardi added, "Irad's been breezing him all week and I asked him if he was worried about anybody he said, 'I'm not worried about anybody.' He showed it; it was unbelievable. When he was sitting right off the pace there, and he made a move at the top of the turn, it was so easy. It's just amazing. There's a lot of thinking to do now. I haven't been thinking about the Haskell, I think the horse needs a little more time than three weeks. Most likely he'll be up in Saratoga for the Jim Dandy."

Right: Firenze Fire heads back to the barn after the race. Winning jockey Irad Ortiz Jr. said, "I got a perfect trip. We got a good post and he broke sharp. He was ready today, it was a big performance. Coming in, I just wanted to ride my race. Let him settle at first and then let him finish. In preparation for the race, we worked with him to gallop out and finish strong. To relax early and finish strong and it worked out good. I expected him to run a big race, but I didn't think he would gallop out like that. I'm so happy to see the way he did it." 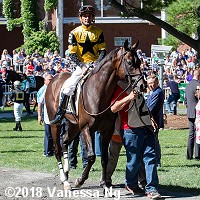 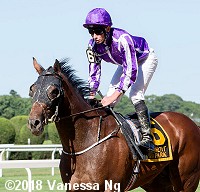 Left: Second place finisher Seven Trumpets in the paddock before the race. The Dale Romans trainee improved his record to 3 wins, 2 seconds, and 0 thirds in 6 starts, earning $257,600 for owner West Point Thoroughbreds.

Right: Third place finisher and beaten favorite Mendelssohn returns after the race. T.J. Comerford, assistant to trainer Aidan O'Brien said, "Aidan thinks it was a great start since Kentucky and he thinks we can build on it. I'm sure the Pennsylvania Derby is in the pipeline. I'm not sure what Aidan has decided. He traveled lovely there. He jumped well from the gate. There's a lot of positive to take out. I thought it was a good run on the dirt. We can't keep swapping and changing [surfaces]. It was a good stepping stone for the next step." Jockey Ryan Moore added, "He ran a nice race for his first run in two months. I expect him to come forward from this today. He was comfortable, he jumped well and he just felt like he'd improve off how he ran today."