The $400,000 Vosburgh Stakes (G1) is a "Win and You're In" qualifier for the Breeders' Cup Sprint. A field of 7 older horses contested this 6 furlong main track event, with Alfred Vanderbilt Handicap (G1) winner Justin Phillip sent off as the 5-2 favorite off a third place finish in the Forego (G1). In to challenge him included 7-2 second choice Private Zone, winner of the Pirate's Bounty at Del Mar, and 9-2 third choice The Lumber Guy, second in the Chowder's First at Saratoga. 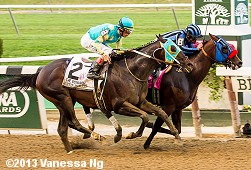 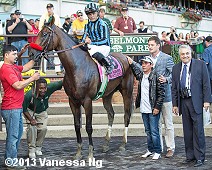 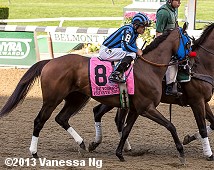 Left: Private Zone in the winner's circle. Jack Sisterson, assistant to trainer Doug O'Neill said, "Justin Phillip came and headed him and then passed him, and he dug down deep and got the win. When he broke out of the gate, I liked the way Martin took him over and got him to the inside. This horse has got natural speed. I wasn't too worried about the fractions. I know he can keep that speed over the six furlongs. We always thought highly of the horse. It's always tough shipping in to Belmont to win an allowance race, never mind a Grade 1. All the credit to Doug and the team back home for getting this horse ready."

Right: Private Zone in the post parade. Jockey Martin Pedroza said, "I got off to a good clean start, and that's what I was concerned about. He's very fast and we just waited for the competition. When I let him run, he gave me everything he had." 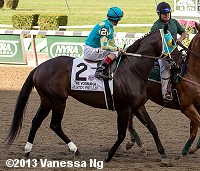 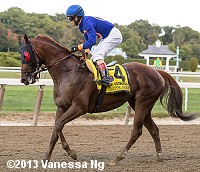 Left: Second place finisher and beaten favorite Justin Phillip in the post parade. Jockey John Velazquez said, "I think it was enough to beat me by a head. When he touched my horse the first time, he lost his balance. The second time, he knocked him completely off balance to beat me by a head. Otherwise, I thought he ran a great race."