The highlight of the Belmont Park Fall Championship Meeting is the $1 million Jockey Club Gold Cup Invitational (G1), a "Win and You're In" qualifier for the Breeders' Cup Classic, contested at the Classic distance of 1 1/4 miles on the main track. A field of 8 older horses went to post on Saturday afternoon under sunny skies and temperatures in the mid 70's. Last year's winner Flat Out was sent off as the 5-2 favorite off a close second in the Woodward (G1) after winning the Suburban (G2). In to challenge him included 11-4 second choice and Belmont Stakes winner (G1) Palace Malice, fourth in the Travers (G1) last out, and 3-1 third choice Cross Traffic, winner of the Whitney Invitational Handicap (G1).

Cross Traffic stumbled badly at the start, spotting the field 13 lengths while jockey Joe Bravo sent 22-1 Alpha to the lead on the clubhouse turn. Alpha set fractions of 23.99, 47.28, and 1:10.78 while 1 1/2 lengths in front of Palace Malice and 21-1 Ron the Greek stalking him second and third. On the far turn, jockey Jose Lezcano aboard Ron the Greek came through along the rail and quickly opened up a 2 length lead at the 1/4 pole through 1 mile in 1:35.08. Kept to task the length of the stretch, Ron the Greek drew off to an impressive 6 3/4 length win over Palace Malice in 1:59.70 over the fast main track. It was another 1 3/4 length back to favorite Flat Out third. 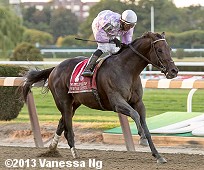 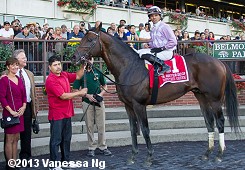 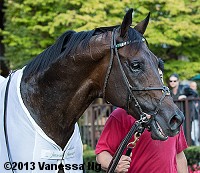 Left: Ron the Greek in the winner's circle. Trainer Bill Mott said, "You gotta love Ron. Everybody loves Ron the Greek! This is the same type of race he ran in the Sunshine Millions, the same type of race he ran in California when he won the Santa Anita Handicap. Every once in a while, he'll throw one of these. I can't determine when, but he did it today. We always think about (running Royal Delta in the Classic). From my perspective, it looks like I have maybe (Ron the Greek and Flat Out) to run in the Classic."

Right: Ron the Greek returns to the barn through the paddock. Jockey Jose Lezcano said, "He broke good and seemed like a different horse today. I put him in position, and when I asked him he took off and was gone. He never stopped. It was unbelievable." 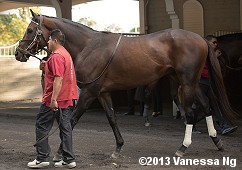 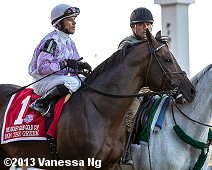 Left: Ron the Greek in the paddock. Trainer Bill Mott added, "I had a flashback to the race in Florida this winter when he won the Sunshine Millions. I said, 'Man, oh, man. He's up there close to the pace today.' We didn't try to plan that. I just told Jose to let him place himself, the way we always do. He's old enough - he knows how he wants to run, and he wanted to run big today." 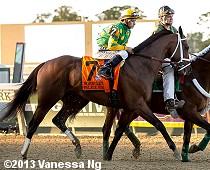 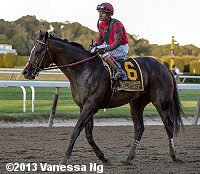 Left: Second place finisher Palace Malice in the post parade. Trainer Todd Pletcher said, "I thought he ran great, you know. He showed his 3-year-old form was legit. He ran well against older horses; he beat a lot of nice older horses today. Ron the Greek is one of those horses that on occasion runs a monster race, and today he did."

Right: Third place finisher and beaten favorite Flat Out returns after the race. Jockey Junior Alvarado said, "The way (Ron the Greek) ran today, nobody was going to get him. My horse was sprinting for home from the 5/16 pole. That horse, though, was something else. I was where I wanted to be the whole way, tracking behind the speed, just waiting for my moment. I was outside; that's where he likes to be. When I asked him he gave it to me. He gave me a nice kick and he was running hard at the end."