Jockey Rajiv Maragh sent Joes Blazing Aaron to a clear lead first time by and he set fractions of 23.92, 47.70, 1:11.57, and 1:35.70 over the firm course, while stalked by 19-1 King Kreesa and 9-1 Imagining. On the far turn, Joes Blazing Aaron tired badly and dropped back to last, but Little Mike, who setled in fifth early under jockey Mike Smith, moved up to take over the lead through 1 1/4 miles in 2:00.33. Big Blue Kitten, last early, rallied well but Little Mike held him off by a nose in 2:25.00. It was a length back to Real Solution third. 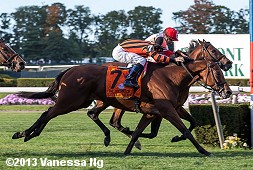 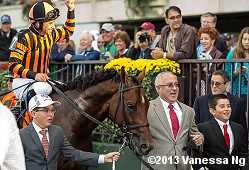 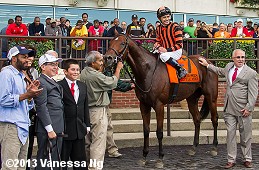 Left: Little Mike takes his walk down Victory Lane. Winning trainer Dale Romans said, "We've had kind of a rough year, and this is our first Grade 1 of the year. He's finally rounding back into form. His form hasn't been that bad, if you analyze it. They've gone after him early in his last two races. We needed to change tactics and come from off the pace. Nobody was giving us easy leads like they were last year. He just proved how versatile he is. I knew we needed to try something different to get him back to the level where he was last year. It worked, so I want to thank Mr. Ramsey for putting the rabbit (Joes Blazing Aaron) in there and changing things around."

Right: Little Mike in the winner's circle. Jockey Mike Smith said, "I was handicapping the race and after looking at it I told Dale that Little Mike's best race, in the Breeders' Cup Turf last year, was when he was off the pace. So I decided I was going to ride this horse the way Ramon rode him. I can mimic all these jocks; I know how they all hold their hands. Ramon always puts one on the neck and one way out, and he's brilliant at it. So I did it, and he kept running and running and running. It worked! My hat's off to Ramon Dominguez." 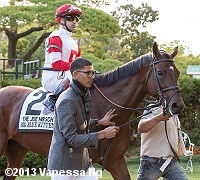 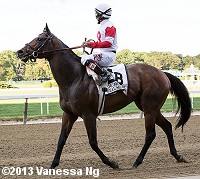 Left: Second place finisher Big Blue Kitten in the paddock. Jockey Joe Bravo said, "He's a brave horse." Trainer Chad Brown added, "I thought he got a good trip on the inside. He was a little further back than I anticipated. Joe said he was a little lethargic early in the race. Turning for home, I thought they both had a great chance to win. Little Mike ran a great race today."

Right: Third place finisher Real Solution returns after the race. Trainer Chad Brown said, "I thought both horses ran well. Real Solution had a wide trip, so I have to look how wide he was the whole way; that wasn't ideal."