The $400,000 Beldame Invitational Stakes (G1) is New York's "Win and You're In" qualifier for the Breeders' Cup Distaff (formerly the Ladies' Classic) contested at 1 1/8 miles around one turn of Belmont Park's main track. After Lady Cohiba scratched, a field of just 5 older fillies and mares went to post, with last year's winner Royal Delta sent off as the 3-10 favorite off wins in the Delaware Handicap (G1) and Personal Ensign Handicap (G1). In to challenge her included 2-1 second choice Princess of Sylmar, the only 3-year-old in the field and winner of the Kentucky Oaks (G1), Coaching Club American Oaks (G1), and Alabama (G1), and 15-1 third choice Centring, third in the Personal Ensign last out.

Jockey Junior Alvarado sent 35-1 Roman Invader to the lead down the backstretch and she set fractions of 23.78 and 46.71 while stalked by Royal Delta a length behind and to her outside. On the far turn, Royal Delta was asked by jockey Mike Smith and she easily gained the lead, getting 3/4 in 1:10.53. However, Princess of Sylmar, who was fourth early, followed the favorite into the lane and the pair hooked up at the 3/16 pole, through 1 mile in 1:35.26. In the final furlong, Princess of Sylmar shook free of the favorite and pulled away to a 2 length victory in 1:47.93 over the fast main track. It was a long 6 3/4 lengths back to Centring third. 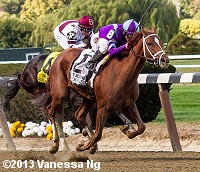 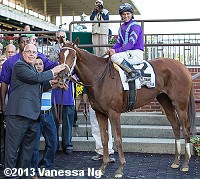 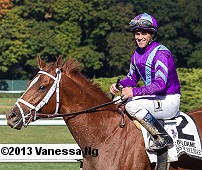 Left: Princess of Sylmar gets a pat from owner Ed Stanco in the winner's circle. Winning trainer Todd Pletcher said, "I just wanted to emphasize, 'Let her run her race. Don't chase. Wherever you are, let it be on her terms, and just try to sit back and play to her strengths'. I felt like if there was anyone on paper who could do that, it was her. It was nice (Royal Delta) didn't get completely loose. We kind of got within striking distance at the 1/4 pole and I thought we had a big shot."

Right: Princess of Sylmar returns after the race. Jockey Javier Castellano said, "If you asked me what the pace was, I couldn't have told you. I thought 48 or 49. My filly did it so easy. I was a little concerned the first half because my goal was just to get her in a good spot and I had to use her a little bit early in the race to get her into a good spot. Turning for home, I turned her loose just a little bit and she gave me the gear and she took off. Royal Delta was my target all the way in the race. When I saw she didn't take off at the 1/4 pole, which usually she does, I thought, 'Whoa, I think I have a chance to win the race'." 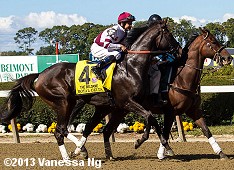 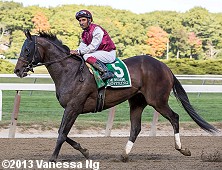 Left: Second place finisher and beaten favorite Royal Delta in the post parade. Trainer Bill Mott said, "We looked for a big race from her. I think she ran a good race, maybe not her best race. When she put (Roman Invader) away on the turn, I thought she'd go ahead and open up a little more than she did. No big excuse. It was an incredible race. You have to give the winner her due. I've won more Breeders' Cups finishing second in the Beldame than winning it." Jockey Mike Smith added,  "She didn't necessarily stumble in front, but just kind of lost her footing for a jump or two. She got up and still was in a comfortable place where I wanted to be. (Princess of Sylmar) got up to me at the 1/4 pole and just out-footed me to the wire today."

Right: Third place finisher Centring returns after the race. The 15-1 shot stalked the pace in third early under jockey Rajiv Maragh, but could not improve late, finishing third beaten 8 3/4 lengths. The Tom Albertrani trainee improved her record to 2 wins, 4 seconds, and 3 thirds in 13 starts, earning $339,102 for owner-breeder Darley Stable.