The $400,000 Kelso Handicap (G2) is a "Win and You're In" qualifier for the Breeders' Cup Dirt Mile (G1), but is also a potential Classic (G1) prep. A field of 7 older horses contested this 1 mile trip around 1 turn of Belmont Park's main track, with Graydar sent off as the 9-10 favorite off wins in the Donn Handicap (G1) and New Orleans Handicap (G2). In to challenge him included the Robert LaPenta two horse-entry of Mountainview Handicap winner Easter Gift and Forego (G1) runner-up Jackson Bend, and 5-1 third choice Souper Speedy, an allowance winner after finishing fourth in the James Marvin (G3).

Jockey Edgar Prado sent Graydar to the lead immediately and he set fractions of 23.41, 47.11, and 1:10.47, saving ground on the turn while stalked by Souper Speedy. Entering the stretch, Souper Speedy tired while 11-1 Brujo de Olleros moved up to challenge. The pair battled for the final furlong but Graydar held off Brujo de Olleros by 3/4 length for the gate-to-wire victory in 1:34.08. It was just a neck back to 6-1 Hymn Book third 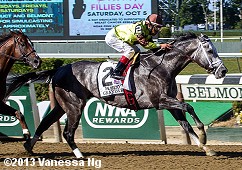 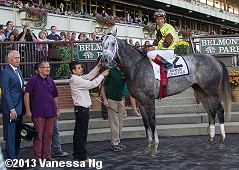 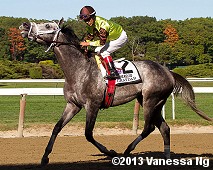 Left: Graydar in the winner's circle. Winning trainer Todd Pletcher said, "We were hoping for that type of performance, but any time you haven't run since March you're always concerned. He didn't break super sharp, but Edgar was able to get into the position we wanted to be in, and the fractions were reasonable. He was able to hold off some challenges. It was good. We're going to the Breeders' Cup but I don't know that we've decided (the Classic or the Mile). Even though they came to him, they never really got by him. He was still in front the 1/8 after the finish line and galloped out a pretty decent 1 1/4. I think we got, enough so that if he trains accordingly, he might be able to (go the Classic distance)."

Right: Graydar returns after the race. Jockey Edgar Prado said, "He broke a little slow, and then I put him in the race. After that, he was pretty much in command. When the runner-up came alongside him, he picked it up and he finished strong." 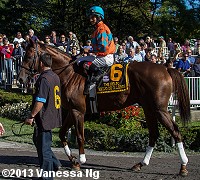 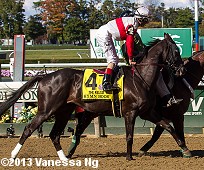 Left: Second place finisher Brujo de Olleros. Jockey Alan Garcia said, "I'm very happy with the way he ran. Turning for home, I thought I was home free, but I didn't have any excuse. Second best."