A field of 8 older fillies and mares (7 betting interests) contested the $600,000 Flower Bowl Invitational Stakes (G1) at Belmont Park, a "Win and You're In" qualifier for the Breeders' Cup Filly and Mare Turf. The two-horse entry of Laughing, winner of the Diana (G1) and Ballston Spa (G2), and Tannery, fourth in the Sword Dancer (G1), was sent off as the 3-5 favorite in this 1 1/4 mile inner turf trip, over 11-2 second choice Qushchi, winner of the Waya at Saratoga, and 7-1 Somali Lemonade, fifth in the Ballston Spar after winning the Dr. James Penny Memorial Handicap (G3).

Jockey Jose Lezcano sent Laughing to the lead first time past the stands and she set easy fractions of 25.68, 51.46, 1:16.02, and 1:39.48 over the firm course while stalked by Somali Lemonade and 8-1 White Rose. At the top of the lane, Laughing continued to lead, as 9-1 Mystical Star moved up to challenge from fourth early. Tannery, seventh early, put in a strong late rally but her entrymate Laughing held her off by 1/2 a length in 2:02.34. It was just a neck back to Mystical Star third. 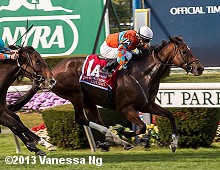 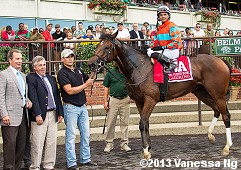 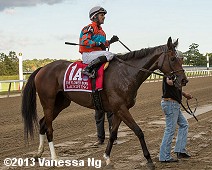 Left: Laughing in the winner's circle. Winning trainer Alan Goldberg said, "She's better at 1 1/4 miles when they go 34 in 1:16. It was great. If somebody jumps up and runs a great race in the Breeders' Cup, they'll just make them champion, but as far as anybody who has run, I don't think there's anybody that's done what she's done this year."

Right: Laughing circles after the race. Jockey Jose Lezcano said, "She broke perfect and she went very comfortably the whole way. When I asked, she gave me the kick I needed to win the race. This was a very good race, especially going longer today. I think this was her best race." 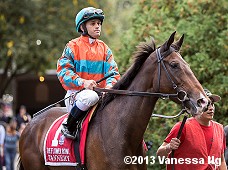 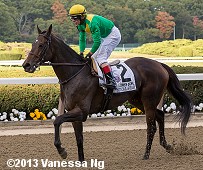 Left: Second place finisher Tannery in the paddock before the race. Richard Santilli, who owns the first two finishers said, "(Laughing) won two Grade 1s, a Grade 2 and a Grade 3. Who's done better? I told (Goldberg) today, I don't think any of them can beat us. Tannery might beat her, but none of these horses."