The $400,000 Vosburgh Stakes (G1) is a "Win and You're In" qualifier for the Breeders' Cup Sprint. A field of 9 older horses (8 betting interests) contested this 6 furlong main track event, with the two-horse entry of Jerome Stakes (G2) winner The Lumber Guy and Affiliate Stakes winner Sean Avery sent off as the 2-1 favorite. In to challenge the pair included 3-1 second choice Justin Phillip, second in the Vanderbilt Handicap (G1) last out, and 6-1 third choice Fort Loudon, off a close second in the King's Bishop (G1). 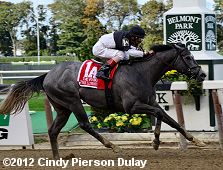 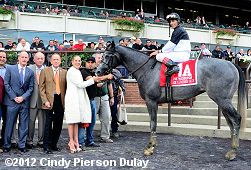 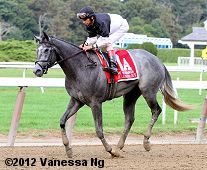 Left: The Lumber Guy in the winner's circle. Winning owner Barry Schwartz said, "We really felt going in that we were going to win today. I just joked, ‘The only bad thing is that we're not going to get 10, 12-1 on him.' He had a month off on my farm after the Peter Pan because he was knocked out. Mike really took it easy getting him back, and he's just come back better than ever."

Right: The Lumber Guy returns after the race. Trainer Mike Hushion said, "This is always a good time of year for 3-year-olds. They've gone through that maturing. I like 3-year-olds vs. older horses this time of year. I've been telling Barry for the past five weeks that he's been working like the real deal. We know he's got a good mile in him from the Jerome. Time will tell. I don't think we'll be doing any jumping to 1 1/8 from here." 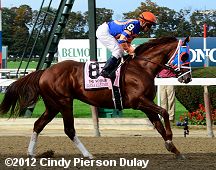 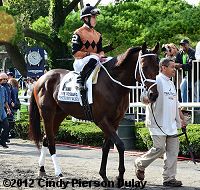 Left: Second place finisher Caixa Eletronica in the post parade. Trainer Todd Pletcher said, "Seems like speed has been holding up pretty well. We got some solid fractions, not quite as fast as we were hoping for, but I thought he ran his race. (The Breeders' Cup) would be Mike's (Repole) decision. He's not Breeders' Cup eligible, so I don't know if he'd want to supplement him or not."