The highlight of the Belmont Park Fall Championship Meeting is the $1 million TVG Jockey Club Gold Cup Invitational (G1), a "Win and You're In" qualifier for the Breeders' Cup Classic, contested at the Classic distance of 1 1/4 miles on the main track. A field of 11 older horses went to post on Saturday afternoon before 8,639 fans under overcast skies and temperatures in the mid 60's, with Whitney Handicap (G1) winner Fort Larned sent off as the 5-2 favorite. In to challenge him included 3-1 second choice Ron the Greek, second in the Whitney after winning the Stephen Foster (G1), and 7-2 third choice and defending champion Flat Out, third in the Whitney last out. 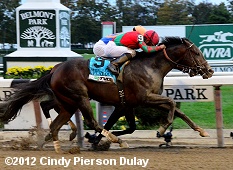 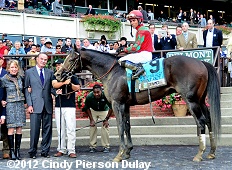 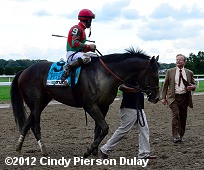 Left: Flat Out in the winner's circle. Owner Art Preston said, "He likes it a lot here. I do, too, now! This is a very hard race. I think he's got what Tesio called ‘morale.' He's tough minded."

Right: Flat Out circles after the race with trainer Bill Mott nearby. Mott said, "He ran a huge race last time. You couldn't have asked the horse to run any better than he did the last time out. He's a relatively fresh horse; he had a little break late spring, and he was up for it today. It looked like Joel let him pick off a couple of horses on the backside, and he was doing it under a hold. That was a good thing. He hadn't asked him to run. The horse was just striding out and picking up horses. (Stay Thirsty) fought on pretty well. Todd looked like he had him ready today, we just had ours a little more ready. And it wasn't by much. Both horses ran huge races and you have to give a lot of credit to the horse who ran second. He ran his butt off." 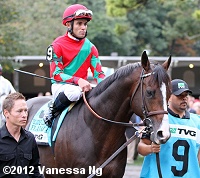 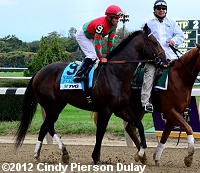 Left: Flat Out heads out of the paddock. Jockey Joel Rosario said, "He was really game today. I had never ridden him before, but he acted like he's a very nice horse. He ran a really good race today. I talked to Bill in the morning, and he told me there were a couple of horses with speed in the race. I just did my thing. He didn't have too much to say. He didn't put too much pressure on me, you know?"

Right: Flat Out warms up before the race. Trainer Bill Mott added, "It kind of worries you a little bit when you win them. When you win the prep race, I don't know if that's a good sign. But I guess Cigar was able to win this race and go on and win the Breeders' Cup." 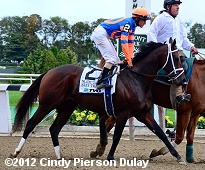 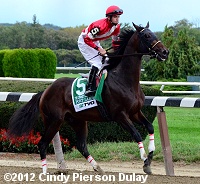 Left: Second place finisher Stay Thirsty warms up before the race. Trainer Todd Pletcher said, "I could see Flat Out building up some momentum, I knew it was going to be close. We layed some pretty solid fractions along the way, I was hoping we had enough to hold on. It was a big effort. We'll talk to Mike (Repole) and see if he wants to try the Classic, or not. It's his call."

Right: Third place finisher and beaten favorite Fort Larned acts up before the race. Trainer Ian Wilkes said, "Good race. My horse ran good. We'll be fine. We'll go to the Breeders' Cup. I wouldn't want to trade places. I think Blame got beat here before he beat Zenyatta. It doesn't pay to win this race to win the Breeders' Cup. You have to look at the bright side. My horse ran. He ran hard. I can't be disappointed; I'm very happy with it. He got a good trip; Brian rode a good race. I've got no problems at all."