The $400,000 Beldame Invitational Stakes (G1) is New York's "Win and You're In" qualifier for the Breeders' Cup Ladies' Classic (formerly the Distaff) contested at 1 1/8 miles around one turn of Belmont Park's main track. After 2 scratches, a short field of just 5 older fillies and mares went to post, with last year's Ladies Classic winner Royal Delta sent off as the 4-5 favorite, off a close second in the Personal Ensign (G1) after winning both the Fleur de Lis (G2) and Delaware Handicap (G2). In to challenge her included 6-5 second choice It's Tricky, third in the Personal Ensign after winning the Ogden Phipps (G1), and 7-1 third choice Cash for Clunkers, 7th in the Delaware Handicap last out. 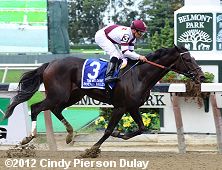 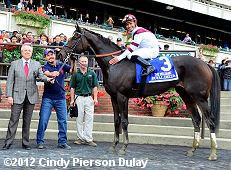 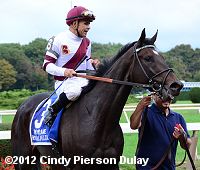 Left: Royal Delta in the winner's circle. Owner Benjamin Leon said, "It was outstanding and what she's capable of doing. I think we have her back. She ran her race, and just turned it on when she had to turn it on. She did her job, and she's an awesome filly. This is a prep race for the Breeders' Cup, and we'll be there." Trainer Bill Mott added, "It's nice to win the race and turn it around a little bit. I'm glad for Royal Delta; she got beat last time, came back, and avenged that loss today. She ran a super race – broke well, took it to the horse on the lead and she was much the best today. Just a very impressive performance. She schooled well here this week. We did a couple of things differently with her as far as the warm up went, so it worked out nicely. She was certainly good today."

Right: Royal Delta returns after the race. Jockey Mike Smith said, "When Cash for Clunkers didn't break, it changed for me because now I've got to make sure and not let It's Tricky get away with something too easy. Halfway down the backside my mare really gathered herself. She was moving, at that point, so much better than It's Tricky, he was having to push her along to keep pace with me, and I thought ‘wow, I hope I'm not going too fast and set it up for someone behind me,' but she was well within herself the whole time. At the wire, as you saw, I geared her down probably two or three gears. She was doing it so easy and we've got another big race coming up, I certainly didn't want to make her do any more than she had to." 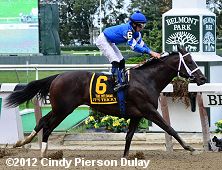 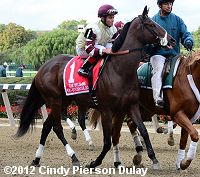 Left: Second place finisher It's Tricky crosses the finish line 9 1/2 lengths behind Royal Delta. Trainer Kiaran McLaughlin said, "Congratulations to the winner. We were second-best. She was very impressive. We thought that (Cash for Clunkers) would be on the lead, but it just didn't work out that way. It was a match race all the way and we finished second-best today. We'll talk with (Godolphin racing manager) Simon Crisford whether to go seven (furlongs) or longer or not go at all (to the Breeders' Cup). We'll talk about it."