A field of 8 older fillies and mares contested the $600,000 Flower Bowl Invitational Stakes (G1) at Belmont Park, a "Win and You're In" qualifier for the Breeders' Cup Filly and Mare Turf. Dream Peace was sent off as the 2-1 favorite off her runner-up finish in the Diana (G1) at Saratoga. In to challenge her included 3-1 second choice Zagora, winner of the Ballston Spa (G2) and Gallorette Handicap (G3), and 7-2 third choice I'm A Dreamer, off her win in the Beverly D (G1) at Arlington.

Jockey Javier Castellano sent 8-1 Hit It Rich to the lead first time by and she set easy fractions of 25.33, 51.73, 1:17.43, and 1:41.69 over the yielding course, while pressed by 14-1 Halo Dolly and 43-1 Bizzy Caroline. Entering the stretch, the pacesetters tired as Zagora moved up to gain the lead at the 3/16 pole. 5-1 Nahrain, fifth early, came through between horses at the 1/16 pole to win by 1/2 a length over Zagora in 2:05.56. It was just a nose back to late-running favorite Dream Peace third. There was a stewards' inquiry focusing on bumping at the top of the stretch but the result stood. 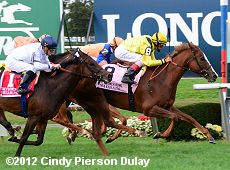 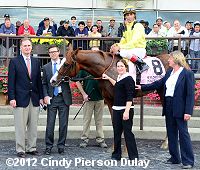 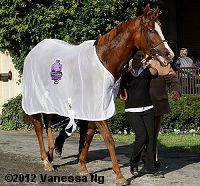 Left: Nahrain in the winner's circle. Winning jockey John Velazquez said, "We had a great trip. We got a really nice position in the first part of the race and then we got hung out a little bit wide on the first turn, but I didn't want to take too much hold of her. We were going pretty slow and I didn't want to take away what she was doing easy. We got to the 3/8 pole and she was going easy, then I had to ride her really hard. (Dream Peace) came to her outside, then she started to run."

Right: Nahrain heads back to the barn after the race with her new winner's blanket. Winning trainer Roger Varian said, "She showed us in her last start when she was third at the Curragh that she was coming back to herself. Her first two runs in the summer, the level of form she showed was incomparable to the high level of form she showed last year, so when we went to Ireland we were just hoping she was going to show us something. When she ran third - of course, we would have liked to have won that day, it was only a Group 2 - it was her first race this year where she finished strongly to the line and showed she was on her way back." 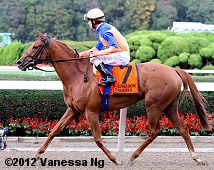 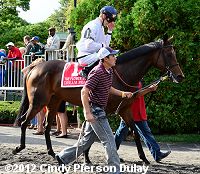 Left: Second place finisher Zagora returns after the race. Trainer Chad Brown said, "By no fault of Ramon (Dominguez) - it was such slow pace - (Zagora) inherited the lead, and had to go on. I don't know if she really saw (winner Nahrain) coming or not. I thought she ran very well. Dream Peace had a rough trip; she was a little far back on a slow pace, had to go widest of all. She got bumped turning for home and hung a bit down the lane, so it wasn't an ideal trip for her."

Right: Third place finisher and beaten favorite Dream Peace heads out of the paddock before the race. Jockey Julien Leparoux said, "It was a good trip. She was relaxed, right behind Johnny (Velazquez aboard Nahrain). I tried to make a run on him, we got a little bump coming out of the turn. She ran big, she tried hard. I think the bump cost her a little bit. She lost a little bit of action."