The $600,000 Joe Hirsch Turf Classic Invitational (G1) is a "Win and You're In" qualifier for the Breeders' Cup Turf. A field of 6 older horses contested this 1 1/2 mile trip over Belmont Park's Widener Turf Course, with Point of Entry sent off as the 3-4 favorite off a four race winning streak including the Man O'War (G1) and Sword Dancer (G1). In to challenge him included 2-1 second choice Little Mike, winner of the Arlington Million last out, and 9-2 third choice Treasure Beach, 6th in the Arlington Million (G1) and winless since the 2011 Secretariat (G1). 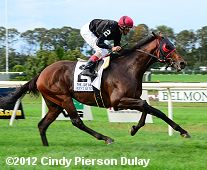 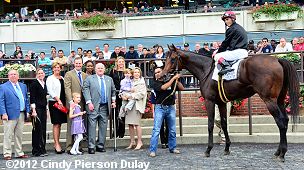 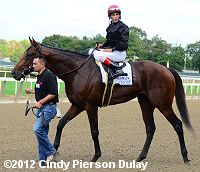 Left: Point of Entry in the winner's circle with trainer Shug McGaughey on the far left and owner Dinny Phipps (center with cane). McGaughey said, "The turf scared me more than anything. I knew it would be a walking race, and he's got enough tactical speed where he can lay where he wants to, and it worked out fine. I hope he comes back fine, and we'll go out there (Santa Anita) and catch a firm turf out there, and I think they'll really see what he can do. I was afraid going into today after all the rain and a big heavy horse like him, it might not be his race. I wasn't concerned with the way it was unfolding. I thought Treasure Beach might be the horse to beat over this turf. I was a little surprised at their tactics when they went on. And then when they opened up around there and carried us out, I was a little bit nervous."

Right: Point of Entry circles after the race. Jockey John Velazquez said, "It seemed like we were going slower and he was having a little bit of a hard time with the ground. When we got to the top of the stretch, I said, 'Let's get him out where he could probably get a little bit comfortable, not between horses.' Once he got there, he was more comfortable. I was running forward already, so I wasn't really worried (when Treasure Beach drifted out). I was worried about somebody else getting through (on the inside). When I asked him to go, he went." 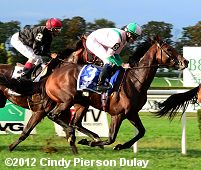 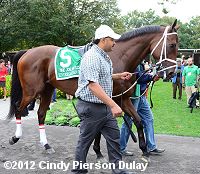 Left: Second place finisher Treasure Beach runs in second place first time by. Jockey Jamie Spencer said, "He ran very well. The pace didn't suit me, that's why I went on so early, but ideally I could have done without the lead for a good bit longer because he was idle in front. Little Mike just stopped, so I had to take the lead, but it was probably not ideal getting there so early."

Right: Third place finisher Kindergarden Kid in the paddock before the race. The 24-1 shot settled fourth early under jockey Javier Castellano, then passed one horse to get third beaten 4 1/4 lengths. The Mike Maker trainee improved his record to 4 wins, 2 seconds, and 6 thirds in 20 starts, earning $278,959 for owners Ken and Sarah Ramsey.