The $400,000 Kelso Handicap (G2) is a "Win and You're In" qualifier for the Breeders' Cup Dirt Mile (G1), but is also a potential Classic (G1) prep. After three scratched, just 6 went to post in this 1 mile trip around 1 turn of the Belmont main track, with Woodward (G1) winner To Honor and Serve sent off as the 6-1 favorite. In to challenge him included 2-1 second choice Shackleford, 8th in the Vanderbilt Handicap (G1) after winning the Metrpolitan Handicap (G1), and 5-1 third choice Tapizar, winner of the West Virginia Governor's Stakes at Mountaineer.

Jockey Ramon Dominguez sent Shackleford to the lead exiting the chute and he set fractions of 22.54, 45.02, and 1:09.31 while pressed by 9-1 Trickmeister, with 8-1 Jersey Town stalking the lead pair in third. On the turn, Jersey Town gained on the leaders and came through the gap between them at the 3/16 pole, quickly drawing away to win by 3 1/2 lengths over Shackleford in 1:35.24. It was just 3/4 length back to Trickmeister third, and a long 4 1/2 lengths back to favorite To Honor and Serve fourth. 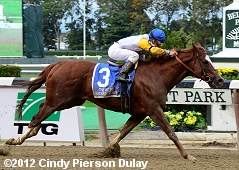 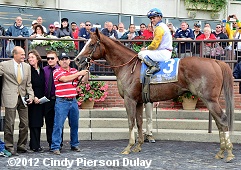 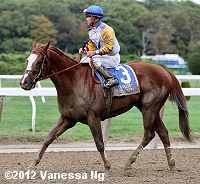 Left: Jersey Town in the crowded winner's circle with trainer Barclay Tagg on the far left. Tagg said, "I was a little surprised because the race came up really, really tough. I was debating whether to go in the Vosburgh or the Kelso. That took a lot of figuring out. I had one reporter angry with me because I told him I was going in the sprint and I went in the mile. I like miles better than sprints, anyway."

Right: Jersey Town returns after the race. Tagg added, "I didn't think I could beat (To Honor and Serve) when he's at his best. He looks like a monster horse when he's at his best. [Jersey Town] just needed to have a couple of races in a row before this one. I thought he needs that kind of thing. He's a real hefty horse. He needs to train hard, but he really doesn't have the legs and feet to train hard on. You have to hit a happy medium, and things were just coming together real nicely for him this fall, so we took a shot at it." 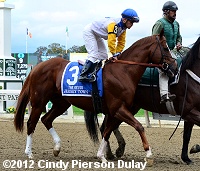 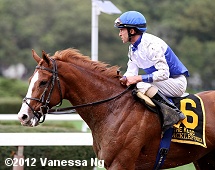 Left: Jersey Town in the post parade. Jockey Javier Castellano said, "It worked out great. It was a hot pace today. There was a lot speed in the race, and it was a small field. It worked out really good for me. I just followed the best horse in the race. Turning for home, the horses got tired; they started backing up a little bit. My horse is a really nice horse to ride. He split horses and took off, and I'm very satisfied with the way he did it."

Right: Second place finisher Shackleford returns after the race. Trainer Dale Romans said, "I've seen him go faster and keep going. It was a little different track today; I told Ramon to take the race to them and make them pass us. Trickmeister is a fast horse, he was running with us and we were going too fast up front. Jersey Town just ran a big race today. I'd like to have gotten the trophy, but it puts us in a good position going to the Breeders' Cup." 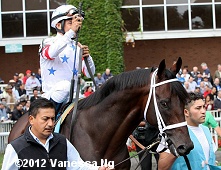 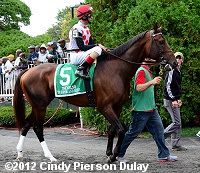 Right: Fourth place finisher and beaten favorite To Honor and Serve heads out of the paddock. Trainer Bill Mott said, "He didn't break; Johnny just said he was a little flat. He didn't put in any kind of effort. I understood the risk in running him today, but I wanted to run him because I felt it was my best shot five weeks from now in the Breeders' Cup. Whether that turns out to be the case or not, I'll have to answer that question myself in 5 weeks, but I just thought running him today was the best thing for me to get him to the Breeders' Cup Classic."