The highlight of the Saratoga meeting each year is the $1 million Travers Stakes (G1). The "Midsummer Derby" features the top 3-year-olds in the country going the classic distance of 1 1/4 miles over the main track. Because of dark clouds and the threat of rain all day, only 40,785 came out to the Spa for the 137th running of this prestigious race. Only six went to the gate, down from the originally drawn field of seven after Kip Deville scratched the morning of the race. Bernardini was sent off as the deserving 2-5 favorite, coming into the race off a four-race winning streak including the Preakness and the Jim Dandy, winning by open lengths each time. In to challenge was 5-2 second choice Bluegrass Cat, runaway winner of the Haskell last time out and who was second in the Kentucky Derby and the Belmont Stakes. The rest went off at double-digit odds, including 12-1 Minister's Bid, second in the Jim Dandy, and 15-1 High Cotton, winner of the Northern Dancer at Churchill Downs and a close second in the Ohio Derby.

First time across the finish line, Bernardini moved up between horses to easily take the lead, and he was 1 1/2 lengths clear at the midpoint of the clubhouse turn after a quarter mile run in 23.53 seconds. Bluegrass Cat moved up along the outside to challenge, and the pair battled it down for the backstretch trip through a half in 48.17 and 3/4 in 1:12.72. Rounding the far turn, jockey Javier Castellano gently urged Bernardini on and he responded, pulling away from Bluegrass Cat by a length at the quarter pole, after a mile in 1:36.83. Through the stretch, Bernardini continued to stretch out his lead, finishing 7 1/2 lengths clear in a time of 2:01.60. It was a long 6 1/4 lengths back from Bluegrass Cat to 40-1 longest shot Dr. Pleasure in third. 34-1 Hesanoldsalt was fourth, High Cotton was fifth, and Minister's Bid checked in last of all. 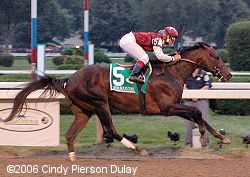 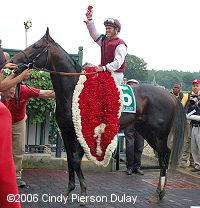 Javier Castellano celebrates aboard Bernardini in the winner's circle. Castellano said, "I did not expect to go to the lead like that, but my horse broke sharp, he wanted to go in the first turn. I didn't want to fight him. I wanted to see him comfortable. I wanted all the people to recognize he's a special horse. He's the best three-year-old in the country right now." Before they loaded into the gate, Castellano had to jump off Bernardini. Asked about this incident he said, "In the post parade, he was feeling good with the crowd and the people, but as we galloped out he took a bad step. I lost my balance and fell to the side. I wasn't worried about it because he's a special horse and nothing bothers him." 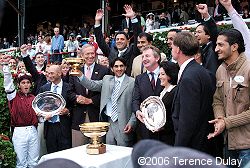 The trophy presentation for the Travers with (left to right in the front): jockey Javier Castellano, trainer Tom Albertraini, New York governer George Pataki, owner Sheikh Mohammed's son Sheikh Rashid bin Mohammed, and Darley bloodstock advisor John Ferguson. Ferguson said, "Bernardini is very special. It's been a fantastic weekend. Saratoga's been a fantastic day today. From our point of view, we had the great Dubai Millennium who was simply spectacular. Bernardini is a great horse and we couldn't be more pleased. I'm so pleased that Sheikh Rashid, Sheikh Mohammed's son is here because he's a huge enthusiast. As far as the industry is concerned, I believe this horse is a superstar. What makes this horse so special is that he's by A.P. Indy, who as you know is one of the great sires living today, his mother is a Grade 1 winner, he is a superstar of a racehorse and he's a superstar of a physical specimen as well." 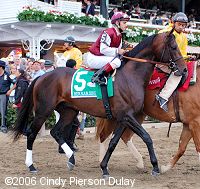 Bernardini in the post parade. Winning trainer Tom Albertrani said, "He trained beautifully going into this race. He was a lot sharper after the Jim Dandy. I would say it was a tremendous race again. I was pretty confident at the half-mile pole. When I saw Johnny (Velazquez aboard Bluegrass Cat) try to get into his horse more it looked like Javier (Castellano) still had horse. When (Castellano) turned around at the quarter pole I knew the race was over. This is such a fantastic horse, he doesn't just win, he wins by daylight." 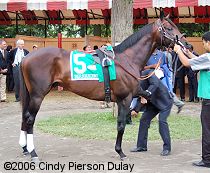 Bernardini gets saddled in the paddock. Trainer Tom Albertraini added, "I put Bernardini in that category with a horse like Cigar and Dubai Millennium. This horse is only a three-year-old and he hasn't even hit his best stride. There's more to come from this horse as he gets older. Horse of the Year, we still have one or two races to tackle before we could get to see this horse become Horse of the Year. I would say now people are going to have to take him into consideration as three-year-old of the year." Albertrani said that Bernardini would start next in the Jockey Club Gold Cup as his final prep for the Breeders' Cup Classic. 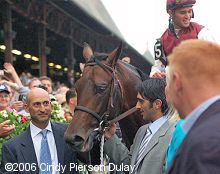 Sheikh Rashid leads Bernardini into the winner's circle with trainer Tom Albertraini while part of his entourage looks on. It was nearly impossible to get a photo due to the large number of people in their group who were all milling about the horse. 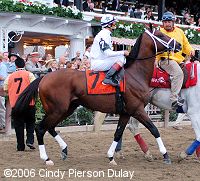 Second place finisher Bluegrass Cat in the post parade. His jockey John Velazquez said, "There was really no speed in the race. Bernardini was going to be on the lead or near it. He got away with slow fractions, and that was it. It was easy for him. I was chasing him from the three-quarter pole and on. I didn't want to overdo it. My horse was fighting right up to the end. But the ixteenth-pole, I was making sure I didn't screw up for second." Trainer Todd Pletcher added, "We were still in the race at the 1/4 pole. They had the horse to beat, and I am sure they wanted to stay out of trouble. He went to the first turn and we got a good stalking trip on him. We had to take every run at him. The way we had to ride him - aggressively the whole race to soften up the favorite - you just wish you had another week between starts."

Update: It was discovered Sunday morning that he fractured his right hind pastern in the Travers and he has been retired. The injury is not life-threatening and could heal on its own without surgery, although that ic being considered. 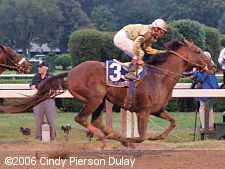 Third place finisher Dr. Pleasure runs out after the race. His jockey Cornelio Velasquez said, "My horse ran good but he is still a little green. He was running hard at the end, but there was no pace to close into." Trainer John Ward added, "Dr. Pleasure is just a little kid running around out there. He's going to get mature one of these days. He isn't anywhere near to his ability. Still, he was able to get a piece of it."