The $250,000 King's Bishop Stakes (G1) is the second Grade 1 event on the Travers Day card. A field of eleven three-year-olds went to the post in this 7 furlong sprint on the main track. Henny Hughes was sent off as the 3-4 favorite off his 10-length romp in the Jersey Shore Breeders' Cup at Monmouth Park last time out. Songster was the 3-1 second choice, having won the Hirsch Jacobs and the Woody Stephens before finishing second in the Amsterdam last out.

46-1 outsider Quietly Go was quickest out of the gate, and he had the lead after a quarter mile in 22.29, but Henny Hughes was already breathing down his neck to his outside in a stalking position. Entering the far turn, jockey John Velazquez let the reins loose on the favorite and Henny Hughes hit his best stride, poking his head in front after a half in 44.62. Through the stretch, Henny Hughes drew away to a 4 1/2 length lead at the 1/8 pole, and easily held off the late charge of 24-1 Star Dabbler to win by 5 1/4 lengths in a time of 1:21.96. It was just 3/4 length back to 7-1 Court Folly in third, while Songster stalked the pace most of the day but faded late to finish fifth. 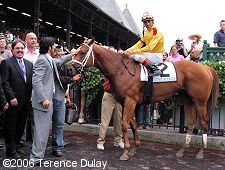 Owner Sheikh Rashid bin Mohammed gives Henny Hughes a pat in the winner's circle. John Ferguson, bloodstock agent to Sheikh Mohammed said, "It's been a fantastic weekend. (Travers winner) Bernardini is a great horse and we couldn't be more pleased. I'm so pleased that Sheikh Rashid, Sheikh Mohammed's son is here because he's a huge enthusiast. Having Henny Hughes win the King's Bishop, it's really made it a magical day for the Maktoum family. Sheikh Mohammed's so sorry he can't be here. As the ruler of Dubai, he's busy at the moment, he's got so much going on, he felt he couldn't get away. With Discreet Cat, Ashkal Way, Incriminate, Henny Hughes and Bernardini it's been a magical two days." 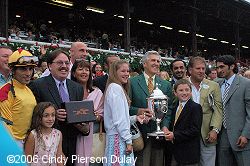 The trophy presentation for the King's Bishop Stakes. Winning trainer Kiaran McLaughlin said, "He's a very special horse. The way he ran at Monmouth last time was just a 'Wow!' to me. The way he ran today was most impressive. This is so important for the horse's future because it's a Grade 1. He loves this track. He was going fast, I was a little worried about the half, but he was just sitting there and he can do it easily. Sheikh Rashid bin Mohammed (owner) flew in from Dubai and it's great to have him here on such an important weekend of racing." McLaughlin said that Henny Hughes would go next in the Vosburgh to take on older horses for the first time. Winning jockey John Velazquez added, "He broke running. All I tried to do was hold him together. He did it all by himself. It was just cruising speed the whole way. Everybody got tired chasing him. He's a tremendous horse." 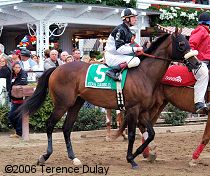 Second place finisher Star Dabbler in the post parade. His trainer Mike Hushion said, "This was a really big effort by our colt. We've always liked him a lot, ever since he was a yearling. He had two nice races together, so we were hoping the third race would be his best and be in the right place at the right time. I think this horse will run long. I really want to get him at a mile and an eighth and two turns." Jockey Richard Migliore added, "He ran like a winner. He just ran into an extremely good horse." 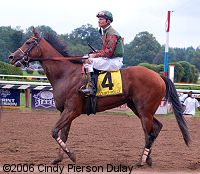 Third place finisher Court Folly returns after the race. His jockey Calvin Borel said, "We were way back early, eighth or ninth place, ten lengths off. He ran his race. He just got outrun. It's the same race he ran three weeks ago (Amsterdam). It's a shame he has to come from so far back, but that's the way he runs, I can't change it. He ran a good race, no excuses." Trainer Ian Wilkes added, "We just got outrun. My gelding ran a tremendous race. That's all I can ask for. Henny Hughes looks like the real deal. I thought he beat a solid bunch of horses today." 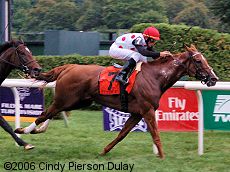 Kicking off the stakes action on Saturday was the $200,000 Ballston Spa Handicap (G2) for older fillies and mares at 1 1/16 miles on the inner turf course. 3-1 second choice My Typhoon saved ground around the clubhouse turn and set a relaxed pace of 24.64, 48.98, and 1:12.82 while allowed an uncontested 1 1/2 length lead for the backstretch trip. Turning for home, jockey Garrett Gomez asked her and she pulled away to a 3 length lead with a furlong to go. However, 9-2 third choice Karen's Caper was gaining on her through the stretch, but My Typhoon had just enough left to hold her off in the final strides to prevail by 3/4 length in 1:41.72. It was 1 1/2 lengths back to 5-1 fourth choice Asi Siempre in third, while 6-5 favorite Sweet Talker stalked the pace in third but had nothing in the stretch, finishing fourth.
Results chart from DRF 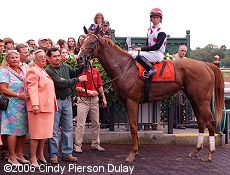 My Typhoon in the winner's circle. Winning trainer Bill Mott said, "I thought we would be on the lead. I was hoping that if she was in front, there would be daylight where she wouldn't be too rank. We got away with reasonable fractions and it worked to our favor. If those fractions were legitimate, then those are the kind you want when you have a horse on the front end. I was concerned bringing her back that quickly. But she seemed to be doing well. I could see she was getting worked up in the post parade. As they approached the finish wire, my fears were put to rest." Jockey Garrett Gomez added, "There was no plan to go to the lead. We didn't see a whole lot of speed in there, so I just took it. She's a real nice filly. When she made the front so easy, I wasn't going to hold her back. From there, she did the rest. She won pretty easily." 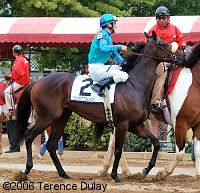 Beaten favorite and fourth place finisher Sweet Talker in the post parade. Her trainer H. Graham Motion said, "We made a decision that if she broke sharp, Ramon (Dominguez, jockey) would let her go to the lead. But she didn't today, and we found ourselves stalking. Maybe all the races and the miles caught up to her today. Our plan wasn't to run here at first, but there is nothing else for her until late September. We'll re-group and see how she comes out." 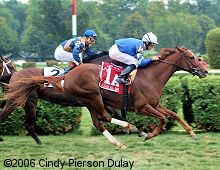 The $200,000 Bernard Baruch Handicap (G2) featured older horses going 1 1/8 miles on the Mellon Turf Course. 6-1 shot T.D. Vance went to the front right away and saved ground along the rail while battling with 7-10 co-favorite Etesaal through fractions of 24.42, 48.23, and 1:11.79. T.D. Vance still held the lead at the 1/8 pole, but Etesaal's entrymate Ashkal Way was gaining with every stride taking the far turn four wide. Through the stretch, the closers passed the tiring T.D. Vance, with Ashkal Way finishing in front by a neck over 6-1 Dreadnaught, in a time of 1:46.78. It was just 3/4 length back to 26-1 longest shot Interpatation in third.
Results chart from DRF 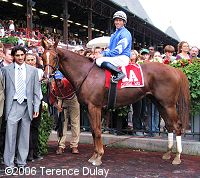 Ashkal Way and Sheikh Rashid in the winner's circle. Rick Mettee, assistant to winning trainer Saeed bin Suroor said, "When he got to the lead, I didn't think anyone would pass him. He got rank the last time in a small field. Once he gets behind horses, he settles better. Once Garrett (Gomez) got him covered up on the rail, I was confident that he would run his race. Garrett said he wanted to run farther along. This is the first race that came up and fit him. I don't know if he can get a mile and a half. I think he can get 1 1/4 or 1 3/8." Jockey Garrett Gomez added, "I thought there was enough early pace. I thought if they went quick enough, I could tuck in. I saw them four across, I knew I could tuck in behind. I had a good trip, I was able to save ground down the backside. The pace stayed pretty bold. I asked him and Godolphin had him ready." 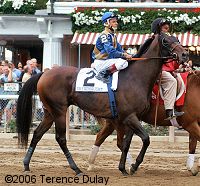