The Belmont Stakes undercard featured three graded stakes races on the dirt: the Acorn Stakes (G1) at 1 mile for the 3-year-old fillies, the Woody Stephens Breeders' Cup Stakes (G2) at 7 furlongs for the 3-year-olds, and the True North Handicap (G2) at 6 furlongs for the sprinters. Despite rain most of the week, high winds and some sun on Saturday morning dried out the track to fast, although it still felt pretty deep when you walked on it.

The filly counterpart of the Belmont Stakes is the $250,000 Acorn Stakes (G1), a one-mile trip around one turn of the Belmont Park main track. Nine 3-year-old fillies went to the gate but before the starter could get the race underway, Miraculous Miss in post 6 reared up in her stall, and kicked Wonder Lady Anne L in the adjacent stall 5. The horses had to be unloaded as Miraculous Miss was trapped under the gate for a short time and both fillies were scratched from the race. This left just seven to run, with Adieu the 9-5 favorite over 3-1 Ermine. 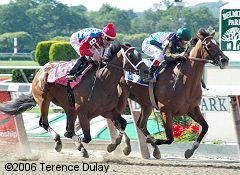 For the half-mile trip down the backstretch, 9-2 fourth choice Bushfire was out in front along the rail while being stalked by 9-1 Hello Liberty through quick fractions of 22.28 and 45.00 into a stiff headwind. Adieu settled in mid-pack fourth while Ermine was unhurried near the back of the field. Rounding the turn, Hello Liberty poked her head in front and had a short lead entering the stretch, after 3/4 in 1:09.43. However, Bushfire stubbornly hung on, and through a battle in the final eighth, battled back to prevail by a neck in a time of 1:35.89. It was 1 3/4 lengths back to 15-1 Last Romance in third, and another 1 3/4 to favorite Adieu in fourth. Ermine showed no rally and was fifth.
Full results chart from DRF 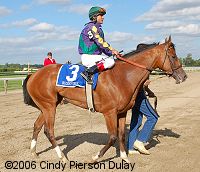 Bushfire returns after winning the Acorn. Winning jockey Alex Solis said, "Those were some fast fractions going against the wind. She's a real nice filly. She really dug in when that filly came to her. She just kept trying and trying." Winning trainer Eddie Kenneally said, "In the (Kentucky) Oaks, she was very wide in the first turn but ran a good race. She's a gutsy filly. It was great to come back and rebound and win a Grade 1. I didn't expect her to be on the lead. I thought Adieu would be on the lead and we would be stalking. She broke sharp. Normally, in horse racing, when you get headed at the eighth-pole, you're going to get beat. She is just so game." Kenneally said they will go next in the Test Stakes at Saratoga. 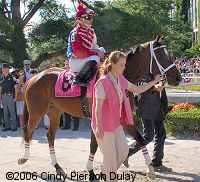 Second place finisher Hello Liberty heads out of the paddock for the post parade. Her jockey Norberto Arroyo Jr. said, "Both fillies ran big. My filly wanted to take the lead too early. I kept holding her and holding her - she had never run that far before. When I let her go, she couldn't open up more than three quarters of a length. The other filly dug in. Either filly deserved to win." 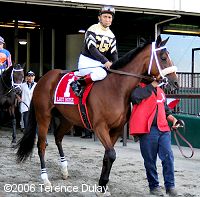 Third place finisher Last Romance comes out of the tunnel from the paddock heading to the track. Her jockey Edgar Prado said, "She broke well and got in good position. She made a really nice move around the far turn. I thought we were in good position to catch the two in front of us, but she just hung in the end." Trainer Richard Dutrow Jr. added, "I was very happy with her run. I know our filly got a good trip, she just couldn't get there." 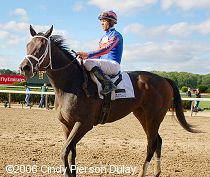 Fourth place finisher and beaten favorite Adieu returns after the race. Her jockey Garrett Gomez said, "She was down inside. Her willingness to help me out just wasn't there. I was just stuck down inside there. I made up a little bit of ground. By the time I got her out, she was wobbly." Trainer Todd Pletcher added, "She had no excuses." 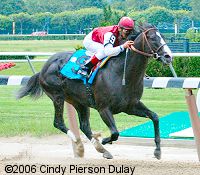 Three-year-old sprinters did battle in the $250,000 Woody Stephens Breeders' Cup (G2), formerly known as the Riva Ridge Stakes. Too Much Bling was the 5-4 favorite over 3-1 Songster in the seven-furlong event over the main track. 8-1 Fabulous Strike got away to a clear lead right away getting the quarter in a quick 22.31, then Songster closed the gap and stalked him along the outside while Too Much Bling slipped on along the inside. Fabulous Strike continued to hold the lead through a half in 44.96 and stubbornly held off the two favorites to the eighth pole, getting 6 furlongs in 1:08.88 before finally weakening to an eventual fourth place finish. Songster and jockey Edgar Prado got the jump on Too Much Bling, surging to the lead and drawing away to win by 2 lengths in a time of 1:21.45. It was just 3/4 length back from Too Much Bling to 13-1 Noonmark in third.
Full results chart from DRF 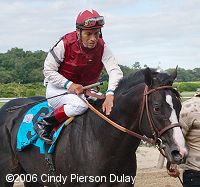 Songster gets a pat from Edgar Prado after winning the race. What a wild eye he has! Prado said, "This last race, he was out there for exercise. Today, he showed a lot of courage. He keeps improving mentally. This is a beautiful horse that has a lot of talent." Trainer Tom Albertraini said, "That was a marvelous race today. He really responded when he needed to find another gear. Edgar kept Too Much Bling down in there and did a great job riding this horse. He really loves to be on the outside. His next race will mostly likely be the King's Bishop (Grade 1, $250,000, 3yos, seven furlongs, Saturday, August 26, Saratoga Race Course)." 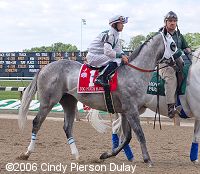 Second place finisher and beaten favorite Too Much Bling in the post parade. Trainer Bob Baffert said, "The post killed us. With a horse like him - with his style - he doesn't like to be in there. The 4-horse (Fabulous Strike) kept him pinned in there the whole way. Songster is a good horse, but he was in a perfect spot there. Put him in the 1 and us on the outside, and I think it's different. When I heard the post, if we hadn't entered on Tuesday, I would have left him in California." Jockey Garrett Gomez added, "It's a typical speed horse. This was the first time we were able to get him to rate behind horses. Bob (Baffert) and I have worked with him to get him to relax. When he drew the 1-hole, I was concerned because he has never been in that predicament. There were a lot of positives. He withstood the hold and today, he showed some versatility." 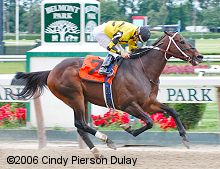 The $200,000 True North Handicap (G2) featured a field of eight older sprinters going six furlongs on the main track. The pair trained by James Jerkens, Tiger and Voodoo, were coupled in the wagering and went off as the 4-5 favorite over 4-1 Spanish Chestnut. When the race got underway, 5-1 shot Anew got away quickest of all and angled in towards the rail from the far outside post to save ground, through fractions of 22.12 and 44.46. Spanish Chestnut gave chase just to his outside. Through the stretch, Anew stubbornly held on to the lead while his challengers began to fade from contention. Anew pulled away to a 5 length lead in mid-stretch, and easily held off the late charge of Tiger to win by 3 1/2 lengths in a time of 1:08.10. It was 1 1/2 lengths back to Spanish Chestnut in third, while co-favorite Voodoo was seventh.
Full results chart from DRF 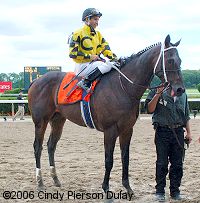 Anew returns after winning the True North. Toby Sheet, assistant to winning trainer Steve Asmussen said, "I saw speed, speed, speed today and I thought the best thing was to send him. His performance was unbelievable. I'm still saying, `Wow!' He's just a cool horse. He was a lunatic before we gelded him and he's still a lunatic, but he's a little better now. We'll see how he comes out." As you can see in the win picture above, Anew does not have a tail, only a stump and he was definitely acting up before the race. 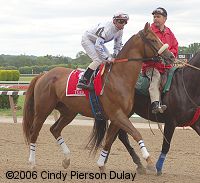 Second place finisher and beaten favorite Tiger in the post parade. His jockey Eibar Coa said, "It was a fast race, not that he can't run that fast, but the track is playing speed-favoring. The winner ran a good race." 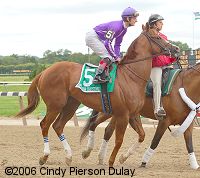