Since its inaugural running in 1997, the $125,000 Singspiel Stakes (G3) was on the Queen's Plate undercard, usually run immediately after the visiting Royal or representative has arrived. However, this year the 1 1/2 mile trip, comprising one complete lap of Woodbine, E.P. Taylor Turf Course, was moved a week earlier. Conditions were excellent at the historic Toronto oval, with cloudy skies and temperatures in the high 60's, the track mostly avoiding the rainshowers that passed through the region. The temporary rail was set out in Lane 3 (30 feet out) and the GoingStick reading was 11.8 (firm).

A field of 8 went to post with Danish Dynaformer sent off as the lukewarm 5-2 favorite, winless since the 2016 running and coming off a 2nd place finish in a Woodbine allowance after finishing 5th in the Elkhorn (G2). In to challenge him included 15-4 second choice Johnny Bear, winless since last year's Northern Dancer (G1) and 5th in an allowance last out, and 4-1 third choice Camelot Kitten, winner of the Kentucky Cup Classic before finishing 7th in both the Old Forester Turf Classic (G1) and the Connaught Cup (G2). 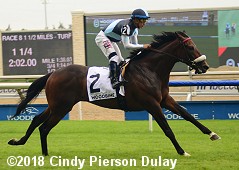 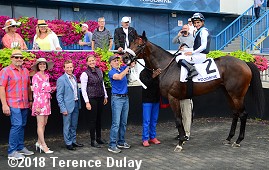 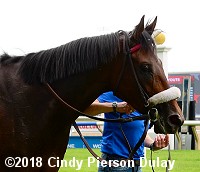 Left: Shahroze in the winner's circle. Winning jockey Alan Garcia said, "Today he was very impressive. He broke well and then was squished out of there and then was last and saved all the ground. When we came turning for home, I said, ‘Let me go wide’ because I have plenty of horse and then he did his job. Graham (Motion) gave me instructions to save some ground, get covered up, and come with a good run, so he did."

Right: Shahroze heads back to the barn after the race. 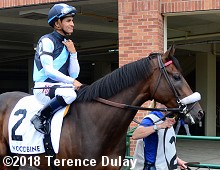 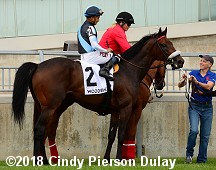 Left: Shahroze heads out of the paddock before the race. Garcia added, "I wanted to be a little closer to the pace today, but he got that problem in the break. After that, turning for home I let him run and he kicked away from everybody." 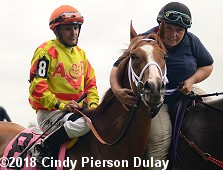 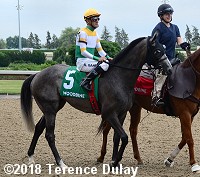 Left: Second place finisher Pumpkin Rumble gets a hug behind the starting gate. The Kevin Attard trainee improved his record to 6 wins, 8 seconds, and 8 thirds in 37 starts, earning $438,667 for owners Al and Bill Ulwelling. 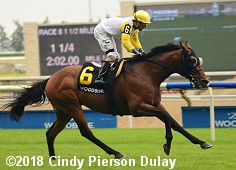 Right: The horses break from the gate for the Singspiel.