With a smaller field of only 9 this year and only 6 of them currenly at Pimlico, it was a fairly quiet morning. This was also the day for the traditional Alibi Breakfast where the trainers of the horses get to make their excuses for Saturday and have a little fun. 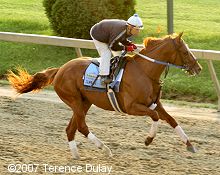 Curlin galloped this morning. He seemed to be really interested in all the stuff in the infield and kept looking in that direction. Assistant trainer Scott Blasi said, "He got shuffled back in the Derby going into the first turn, but started to figure it out at the 1/2 mile pole and leveled out nicely. I thought he ran a great race and he'll run another one this weekend. I think he'll like this racetrack, he's a great horse." 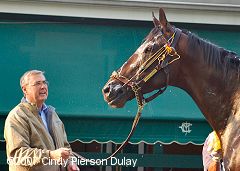 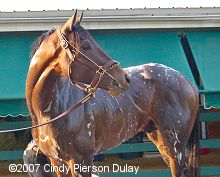 Street Sense didn't go to the track today, but instead just got a bath and walked the shedrow. On the left, trainer Carl Nafzger shares a moment with his Derby winner. Nafzger said, "He's done a great job taking us here. I guess if the rail opens up again we'll be OK. Hard Spun is going to be tough, Curlin is going to step up big time, It's going to be a beautiful race." 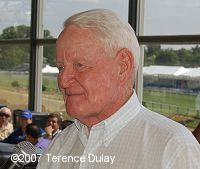 Street Sense's owner Jim Tafel at the Alibi Breakfast where he said, "As far as his bloodlines are concerned, his dam is by Dixieland Band, and of course (sire) Street Cry is Mr. Prospector line. Street Cry dusted us pretty good in the Stephen Foster at Churchill where Unshaded ran fifth. But it's not how you start them, it's how you finish, and that's very fitting for Street Sense. He ran well in both the Derby and the Breeders' Cup." 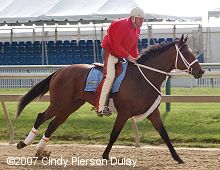 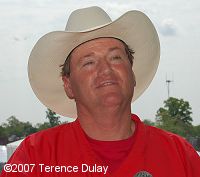 Hard Spun galloped with trainer Larry Jones aboard. On the right is Jones at the Alibi Breakfast where he said, "The only thing I'm real concerned about is, before the Derby I took all kinds of bashing from the media. We took 6 weeks before the Derby, they said that couldn't be done; we worked him too slow on Polytrack and then way too fast at Churchill Downs. But since the Derby I haven't heard any criticisms from anybody! Now I think I'm training the horse the way the media would do it, so now I'm second-guessing my opinions here! Asked if having Mario Pino aboard is an edge, he added, "I'm glad for Calvin (Borel) and Carl (Nafzger), that's their track, but this is Pino country. He's won more races in Maryland than anybody." 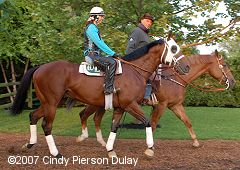 Flying First Class heads out to the track for a gallop with trainer D. Wayne Lukas leading him on the pony horse. At the Alibi Breakfast, Lukas said, "Of the nine Preakness starters this year, I trained the sires of four of them (sic), which ages me a bit, but I'm really proud of that! We are coming into the Preakness trying to catch these guys who are here off 2 weeks rest and won't be as effective. However I saw Street Sense work and he looks like he's in top form. But this is the Preakness and things happen here, it's a different race with a different configuration. Our horse is very quick, he ran a good race in the Derby Trial, so we just want to get a piece of it, enjoy some crabcakes, because Maryland is our favorite place." 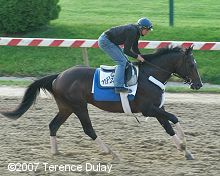 CP West galloped this morning for trainer Nick Zito. At the Alibi Breakfast he said, "He's a wonderful colt. He was a bit behind the other three-year-olds, this is only his third start this year, but he's a quality colt. Street Sense is a marvelous horse as is Hard Spun, but on the other hand we gotta play the game, and maybe pull off the upset, that's what we're trying to do. We've had a lot of luck (with Edgar Prado), won some big races, so we got a shot." 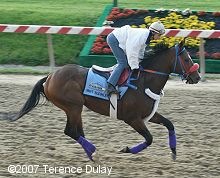 Mint Slewlep also galloped this morning. His trainer Robbie Bailes said at the Alibi Breakfast, "Very excited to be here. He's been a very nice colt for us since the day we bought him at the two-year-olds in training sale. His owner told me 'you gotta get me back to the Preakness!' We're really looking forward to it." Bailes also trained Scrappy T who finished second to Afleet Alex in 2005. 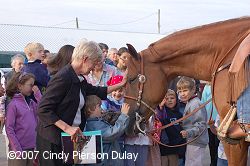 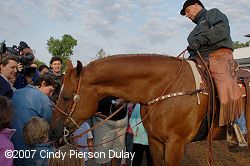 Fans could come back to the stakes barn on tours this morning and one group with lots of children got a surprise visit by trainer D. Wayne Lukas and his pony horse Pancho. The kids got to pet him and feet him peppermints and apples as a special treat. 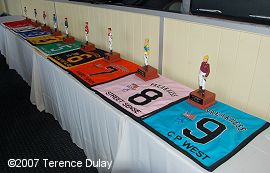 The Preakness saddlecloths on display at the Alibi Breakfast on Thursday morning. The jockey statues are painted with each runner's silks and are a gift for the owners. 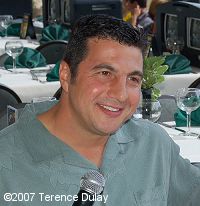 At the Alibi Breakfast, Xchanger's majority owner Domenico Zannino said, "He came out of the Tesio absolutely perfect. Won the big race, trained excellent, he's run great over his track. The trainer (Mark Shuman) is with Xchanger at Fair Hill. We're really excited." He is the only horse in the field with a win at Pimlico. 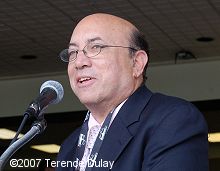 Jeff Siegel, vice president of ownership group Team Valor, said about King of the Roxy, "After the Santa Anita Derby we felt the Kentucky Derby wasn't in the cards so Gary and I thought about the Preakness. We've been waiting for this race ever since then and the horse is doing great. He worked well the other day with Garrett (Gomez) in the saddle. We're taking a shot and we'll see how good he really is. 12-1 is a fair price. Hopefully he'll outrun his odds." 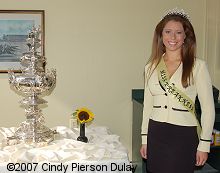 Miss Preakness, Katie Meadowcroft, with the Woodlawn Vase. The Woodlawn Vase is the permanent Preakness trophy and the most valuable trophy in sports, worth over $1 million. The silver trophy is 34 inches tall, weighs almost 30 pounds, and was created by Tiffany and Company in 1860. The winner gets a smaller sterling silver replica to keep.