The $1 million Preakness Stakes (G1) held at Pimlico Race Course in Baltimore is the middle jewel of the Triple Crown. A record crowd of 121,263 was on hand this year to witness the rematch between the top three finishers of the Kentucky Derby under dark clouds and intermittent showers. A field of just nine went to the gate in this 1 3/16 mile main track feature. Derby winner Street Sense was sent off as the 6-5 favorite over 7-2 Curlin, who was third in Louisville. Local hope Hard Spun, who set the pace in the Derby only to be passed in the stretch by Street Sense, was the 4-1 third choice. Circular Quay, sixth in the Derby after an 8 week layoff, was the 6-1 fourth choice with the rest of the field in double digits.

23-1 shot Xchanger battled on the front end with 17-1 Flying First Class first time past the stands and around the clubhouse turn through an initial quarter in 22.83 and a half in 45.75. Hard Spun stalked the pace in third out wide with 14-1 King of the Roxy behind him. Near the end of the backstretch Hard Spun surged ahead to take over the lead after 3/4 in 1:09.80 and pulled away to a 2 length advantage at he top of the home straight. Street Sense and Curlin, who had settled near the back of the field early, began their usual late rallies on the turn. With a furlong to go, Street Sense was 1 1/2 lengths clear but Curlin was gaining with every stride. The pair dueled neck and neck through the final 1/16, but Curlin dug in late to poke his head in front at the line to get the victory in 1:53.46, tying the stakes record. It was a long 4 lengths back to the tiring Hard Spun in third, and 25-1 C P West was fourth. Circular Quay was fifth. 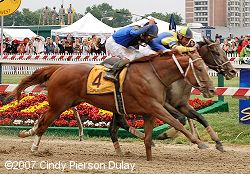 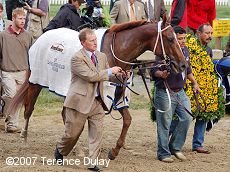 Curlin heads back to the barn with his flowers and Preakness winner's blanket. His co-owner George Bolton, a Baltimore native, said, "It is a dream come true. I grew up on a farm that my father owns. The team was all there last night. You never think you are going to ever be in a race or win a race like this. This is something that is very surreal. The Derby was surreal. The Arkansas Derby was surreal. I am just very proud to be associated with this group and to win a race ten miles from my father's farm is a great, great honor. But I think the most important thing for all of us is that Curlin won a great one and he won one of the three classics. If I had anything to prioritize in my head, it is just great to win a big, big race with a horse that has got the talent he does." 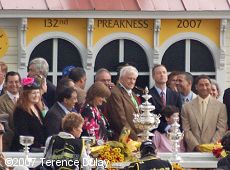 The trophy presentation for the Preakness. Co-owner Jess Jackson said, "I enjoy sharing racing with other people and not just the family. I think it's a sport that brings people together and we as a team owning this horse are sharing the excitement of a lifetime dream and that's what really is pleasing here now. Everybody here that has had faith in the horse has been rewarded with our initial faith, thinking that this horse was so extraordinary that we would have to have him and give him a chance and here he is." 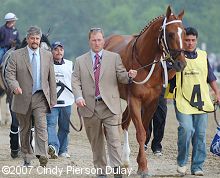 Curlin comes over to be saddled for the Preakness with trainer Steve Asmussen following behind. Asmussen said, "Every day this horse has run he has done something like this. This is the norm for him. In the Derby we were third, hats off to the winner. He deserves the credit for winning the Derby just like Curlin deserves credit for winning the Preakness. He stumbled away, he was a little further back than we want. Robby had to guide him around the tight turns here. He does have a tendency of getting out. And once he went to hit right lead he was good enough to win a classic and that's who he is. It puts him in, now everybody feels about him the way we always have. I am extremely pleased where he is right now. He has been very healthy, very sound, very sound of mind as well as body and that's what we are looking to continue with him." Asmussen did not commit to starting in the Belmont, but did say "We hope that's possible but, of course, the horse comes back well. This is the stage this horse was meant for and I think that his races will be used in that caliber of race." 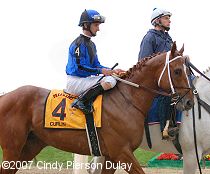 Curlin in the rainy post parade for the Preakness. Winning jockey Robby Albarado said, "He stumbled pretty bad leaving the gate. My whole focus today was getting him away from the gates in order. I kept focusing on that, making sure he is wound up well enough and he stumbled. Obviously I had to go to plan B. I had to use him a little more than I needed to under the wire the first time, keeping him in contention. But I was always content where I was. I kept my horns spun and awaited the champ to come on by any time. Curlin was negotiating in the short turns here at Pimlico really well. I was getting him out and trying to manage him and guide him around that. Street Sense run up inside of me very, very rapid. Curlin just exploded away from him. He just has his way about him, the last part of the race he wants to win." 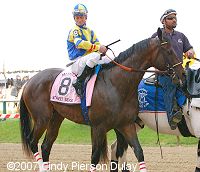 Second place finisher and narrowly beaten favorite Street Sense in the post parade. His trainer Carl Nafzger said, "Heartbreaking, that's what it was. We only needed a nose. Curlin ran a hell of a race, but we had Curlin. We should have never let him come back and get us. There's nothing you can do about it until he decide he wants to go on. Or wait a little longer to squeeze the trigger; that's all. I really thought when Hard Spun made his move he might not be catchable. We caught him and we got to the lead We were 2 1/2 (lengths) in front and we let the horse win. A good horse kept running and nobody else came running. He beat us at the wire, and that's where they take the picture."

His jockey Calvin Borel said, "I thought it was all over when I got by Hard Spun turning for home. I thought he was just going to gallop. But things happen. He just got to gawking 40 yards from home and he just got outrun. I thought I rode a perfect race, and Carl did too. It's far from over. If he comes back good, we'll be alright." 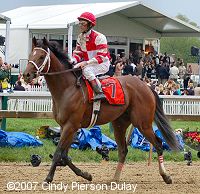 Third place finisher Hard Spun returns after the finish of the Preakness. His trainer Larry Jones said, "(Edgar) Prado (aboard C P West) was coming up on the outside and we pretty well had to go. He wasn't going to let us set there and go. That probably hurt us as bad as anything. We'd have loved to put that move off for another 1/8 mile, but he did well. I'm pleased. We'd love to win it, especially being here at (jockey Mario Pino's) track, but good horses ran. The top three finishers in the Derby were 1-2-3 here. The next time, let's see, third went to first. Yeah, it's my turn the next time. We'd have loved to finish up with them, but it was a great horse race." Asked about the Belmont he said, "We'll discuss it. His mother was a stakes winner at a mile and a half. There is no reason to think he can't do it because he sure won't have to run this fast early next time. We'll discuss it. As we said when we started, we had plans of running three races, all three of them. We'll see. This race sure doesn't make me think that we can't do it."

His jockey Mario Pino said, "When I made my move, I didn't want to wait and let them get on top of me. It could have really worked out for us right there. They were really coming hard, and there was nothing I could have done about it. I thought Street Sense was going to win when he went by me." 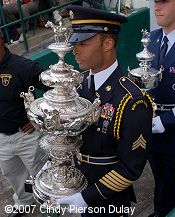 The Maryland National Guard carries the Woodlawn Vase over to the winner's circle earlier in the day. The Woodlawn Vase is the permanent Preakness trophy and the most valuable trophy in sports, worth over $1 million. The silver trophy is 34 inches tall, weighs almost 30 pounds, and was created by Tiffany and Company in 1860. The winner gets a smaller sterling silver replica to keep.