The on-track crowd of 121,263 at Pimlico on Preakness Day, a new record for a sporting event in Maryland, were treated not only to the Preakness Stakes but to a undercard with seven other stakes races with purses of at least $100,000. The earlier races were contested under mostly sunny skies and temperatures in the low 70's, however, before the Preakness the temperature dropped into the 60's accompanied by dark clouds and showers. The track was fast and the turf course firm for the entire day. 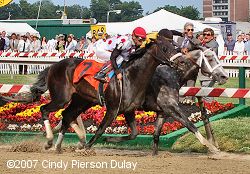 The $100,000 William Donald Schaefer Handicap (G3) is run immediately before the Preakness, and features older horses going 1 1/8 miles on the main track. 3-1 second choice Flashy Bull stalked the pace set by 9-1 Take The Bluff, took over in mid-stretch, and was all-out to hold off the late move of even-money favorite Hesanoldsalt to get the victory in 1:47.86. It was a long 5 lengths back to 6-1 Ryan's For Real in third.
Full results chart from Equibase 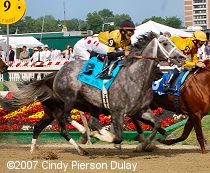 Flashy Bull close to the pace as they pass the stands for the first time. Managing partner Terry Finley of his owners West Point Thoroughbreds said, "The race set up really well for us. We thought there'd be a lot of speed and there was. Down the backstretch, I kept my eye on Edgar (Prado aboard Hesanoldsalt), and I thought we were going to run a good second. This horse really came back well. We couldn't have been happier today." Jockey Alan Garcia added, "From the 1/4 pole on, my horse just gave everything to the finish. I'm very proud of him. This is one of my biggest wins. It's been a good year with some really good horses. What a race." 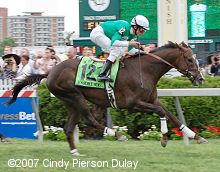 The $250,000 Dixie Stakes (G2) is the second richest race on the card, and features older horses going 1 1/8 miles on the turf. 6-1 third choice Remarkable News sat 3 lengths off the pace set by 11-1 Mending Fences, until the pacesetter broke down near the end of the backstretch, throwing jockey Eddie Castro to the turf. Jockey Ramon Dominguez managed to swerve Remarkable News around the injured horse and then in the stretch, was all out to hold off 2-1 favorite Cosmonaut by 3/4 length at the line in 1:46.36. 5-2 second choice Einstein stumbled over Mending Fences, losing rider Robby Albarado in the process. Both riders were uninjured and Albarado went on to win the Preakness aboard Curlin, but sadly, Mending Fences had to be euthanized.
Full results chart from Equibase 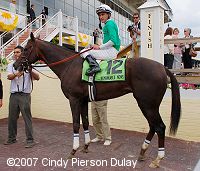 Remarkable News in the winner's circle. His trainer Angel Penna Jr. said, "Every time we win it's a wonderful race. I'm really sorry it was marred by something, but I really don't know what happened. It was a great ride by Ramon. I was concerned about the post, but he did it without effort, without losing a lot of ground. Ramon gave him a tremendous ride." Jockey Ramon Dominguez added, "(Mending Fences) really didn't stumble, he just fell to the ground. I couldn't even avoid him, even if I wanted to. I was very close to him, but he didn't interfere with me. I just hate to see that happen. My horse just ran a very good race. He ran nicely. I was in very good position. He got it done going a mile and an eighth, because that was a concern for a lot of people. He proved that he has a lot of class." 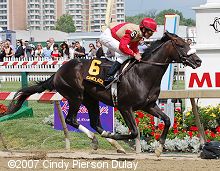 The $100,000 Barbaro Stakes, formerly run as the Sir Barton Stakes, saw just five 3-year-olds go 1 1/16 miles on the main track. 3-10 favorite Chelokee, who was originally slated to start in the Preakness, stalked the early pace of 4-1 second choice Stonehouse through fractions of 23.60 and 46.80, then took over the lead on the far turn and drew away to a 4 3/4 length victory in 1:43.44 over the fast main track. It was a long 4 3/4 lengths back to Zephyr Cat in third while pacesetter Stonehouse was fourth.
Full results chart from Equibase 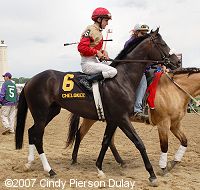 Chelokee in the post parade. His trainer Michael Matz said, "Right now, I'm elated. I couldn't be happier. I have a promising horse. To win the first Barbaro Stakes, it's a great feeling. I'm glad we decided to run in the race. He had a couple of little problems. This should straighten him up a little bit and make him all the better for it." Asked if Chelokee would go in the Belmont next, he said, "It's still a little early to tell. We'll see how he comes out of this race. He hadn't run in 7 weeks. Those other (3-year-olds) are looking like they're doing real good, so at this point, we'll just wait and see where we are." 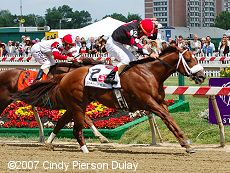 The $200,000 Emirates Airline Maryland Breeders' Cup Sprint Handicap (G3) featured a field of seven older horses sprinting 6 furlongs on the main track. Even-money favorite Diabolical ran to expectation, stalking the pace of 9-2 Talent Search through a half in 44.65 and 5/8 in 56.53, then taking command inside the 1/8 pole to prevail by 3/4 length in a time of 1:09.16. It was another 1 1/2 lengths back to 5-1 Semaphore Man in third.
Full results chart from Equibase 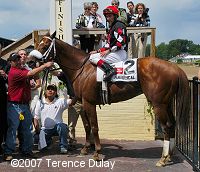 Diabolical in the winner's circle. His owner Jeff Puglisi said, "We had to win today. At 4-5, he better win. He's faced a lot of tough competition in his last two races. It's been one war after another. He's 1-2-3 every race." Jockey Mario Pino added, "He broke well, like a quarter horse, and relaxed nicely down the backstretch. I wanted to keep the heat on. The inside horse kept shaking free a little at a time, so I wanted to continue putting the pressure on him. So I kept putting pressure on him, and he responded nicely." 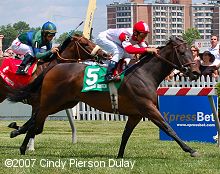 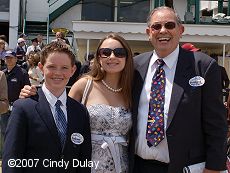 Owner Ken Ramsey with his grandchildren Amanda and Nolan after the race. Ramsey said, "I thought Bejarano rode her perfectly. He said before the race we had the best horse, and he put him in the race. Jose Cuevas saddled her, but Chad Brown actually trained her for (trainer Bobby Frankel) down in Churchill. My wife (Sarah) had a stroke in February and it's been tough on the whole family. The win, today, probably brought her some joy at home." Jockey Rafael Bejarano added, "I had the best horse in the race. She had a very nice trip to the quarter pole. Once I let her go, she gave me everything." 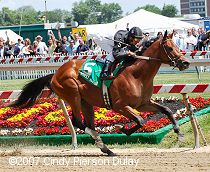 The $100,000 Hirsch Jacobs Stakes (G3) featured 3-year-olds sprinting 6 furlongs on the main track. 9-5 favorite Street Magician settled off the pace in fourth early as 9-1 Southwestern Heat was as many as 5 lengths clear of the field through quick fractions of 22.66, 45.17, and 57.59. However, as the pacesetter tired from the quick pace, Street Magician came through a narrow opening on the rail inside the 1/8 pole to get the win by 1 length in 1:10.97. It was 2 1/2 lengths back to 7-1 Hobbitontherocks in third.
Full results chart from Equibase 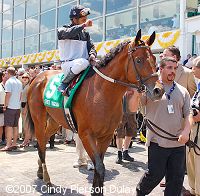 Jockey Rafael Bejarano celebrates as they lead Street Magician to the winner's circle. His trainer Michael Trombetta said, "I'm very pleased. I knew (Southwestern Heat) would be used. He has a lot of speed. I'm tickled to death to be able to run him down. Today my horse showed versatility he'd never shown before. I'm not sure if he's a two-turn horse yet, but this was something encouraging." Jockey Rafael Bejarano added, "It really wasn't planned to be that far off the early pace, but we just didn't get the best of breaks. Once this colt got going, he ran his race. He ran really good. Things got pretty close down the lane when the other horse was coming in a little bit, but my horse didn't overly react. 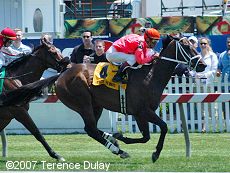 Kicking off the stakes action on Preakness Day was the $100,000 Baltimore City Turf Sprint for older horses going 5 furlongs on the turf. Lukewarm 3-1 favorite Heros Reward saved ground on the turn while stalking the pace of 7-1 Bingobear, and then took over the lead inside the 1/8 pole, drawing clear to win by a length in 55.90 seconds. It was just a head back to 8-1 Mr. Mutter in third.
Full results chart from Equibase 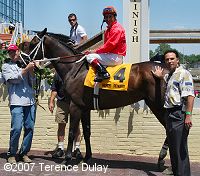 Hero's Reward in the winner's circle. His trainer Dale Capuano said, "It set up nice. Edgar rode him perfect as usual and we were able to win. That makes it easy. Edgar really knows what to do. He broke him well, had him in good position and he did the rest. Jockey Edgar Prado added, "We had a beautiful race. We got off to a clean break and I was able to sit behind the speed. When I had a chance, I took the horse outside and we took over."