On the day before the Preakness Stakes, Pimlico Race Course in Baltimore hosts the female equivalent, the $250,000 Black-Eyed Susan Stakes (G2), a 1 1/8 mile main track event. Only 25,167 were on hand due to the threat of rains which did not come. A field of eight 3-year-old fillies went to post with Baroness Thatcher sent off as the 8-5 favorite despite having not won since January. Panty Raid, an allowance winner last out and second in the Bourbonette at Turfway was the 5-2 second choice over 3-1 Winning Point, second in the Comely at Aqueduct in her last start.

Baroness Thatcher went straight to the front out of the starting gate and set a pace of 24.05, 48.08, and 1:11.90 while loose on the lead most of the way down the backstretch. Panty Raid sat in midpack fourth in close contention while Winning Point also stayed close in sixth. Entering the stretch, Garrett Gomez asked Baroness Thatcher to pick up the pace and she pulled away to a 1 1/2 length lead with a furlong to go. However, Panty Raid, who had saved ground around both turns, came out and closed well through the stretch. Winning Point came out four wide into the lane and also put in a late rally. The pair passed Baroness Thatcher with a 1/16 to go, with Panty Raid getting the victory by a length over Winning Point in 1:50.07 over the fast main track. It was just a neck back to Baroness Thatcher in third, and a long 8 lengths to the balance of the field. 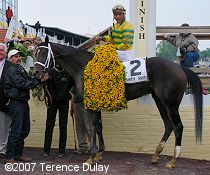 Panty Raid in the winner's circle. Winning trainer Todd Pletcher said, "I could see at the 1/2 mile pole Edgar was asking her for a little more. It looks to me like she's a filly that's very steady. She keeps coming and that's why I thought the mile and an eighth would suit her very well. I don't know as much that she quickened as much as she stayed on the same pace. That's what makes the good ones, the ones that can carry their speed over a longer distance of ground." 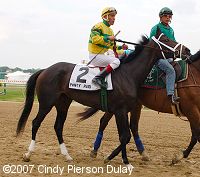 Panty Raid in the post parade before the race. Winning jockey Edgar Prado said, "We broke sharp and I was very happy. We were able to sit just behind the speed and we were going good. I started to get worried at the half-mile pole because she didn't grab the bit. I was worried around the turn, as well, because I couldn't get her going. But when I tapped her at the top of the stretch, she changed leads and I was happy again." 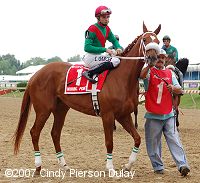 Second place finisher Winning Point in the post parade. Her trainer Eddie Gaudet said, "She didn't have the easiest of trips. She had to sit, sit, sit. Maybe if she got out a little earlier, but I'm still tickled. When she works, she finishes up big and knows when to go. We'll definitely be seeing her in other stakes. I'm 76 years old, and I do what I love and love what I do. I feel like a 10-year-old today." 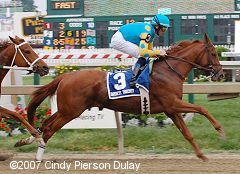 Third place finisher and beaten favorite Baroness Thatcher leads first time by. Her jockey Garrett Gomez said, "A mile and an eighth is good as far as getting her to relax, but when they came to her too early, it was just too much." 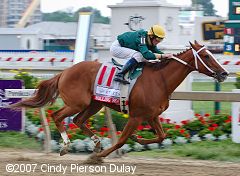 The co-feature on Friday was the $200,000 Allaire du Pont Breeders' Cup Distaff Stakes (G2) for older fillies and mares going 1 1/16 miles on the main track. Sixty Sails winner Kettleoneup was sent off as the 6-5 favorite over 4-1 Leah's Secret, fifth in the Humana Distaff last time out.

5-1 shot Fiery Pursuit set the early pace of 24.62, 48.78, and 1:12.96 while being chased by 6-1 Rolling Sea and Leah's Secret down the backstretch. Kettleoneup sat back in fifth. On the far turn, Rolling Sea took over the lead from the tiring Fiery Pursuit, and pulled away to a 2 1/2 length lead with a furlong to go. Leah's Secret put in a late rally but was left with too much ground to make up, as Rolling Sea cruised to a 2 1/4 length victory in 1:42.88. It was just 3/4 length back to favorite Kettleoneup in third.
Full results chart 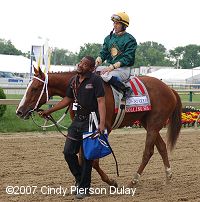 Rolling Sea heads to the winner's circle. Winning trainer Steve Asmussen said, "Garrett gave her a dream trip. She laid second with modest fractions to put her in a position to win. (The scratches) made it extremely manageable for us with the post-position draw, with her drawing 11 of 12. I was very concerned. She kind of wants to be forwardly placed, but she doesn't have the speed to clear them."

Winning jockey Garrett Gomez said, "I was able to ride confidently. This is a really good horse. She rated quite well. She was relaxed throughout the race and when I called on her, she had all the answers needed today." 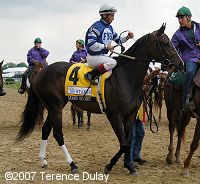 Second place finisher Leah's Secret in the post parade. Her trainer Helen Pitts said, "I was really tickled with her effort. It was the first time she's gone around two turns. I thought she was going to get up for a minute. She ran huge. I am really pleased. I'm going to try to find her races that are going a mile or a mile and a sixteenth and try to stretch her out." 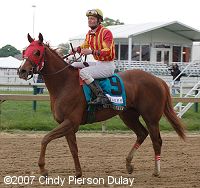 Third place finisher and beaten favorite Kettleoneup returns after the race. Her jockey Calvin Borel said, "I had a good trip and she ran a good race. I had to have her closer to the pace, because there wasn't any pace in there. She doesn't have that quick turn of foot, and she needs them to come back to her, and they didn't today." 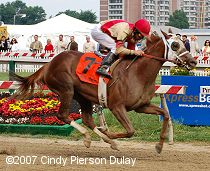 The $125,000 Adena Springs Miss Preakness Stakes saw a field of seven 3-year-old fillies sprint 6 furlongs on the main track, with the first three finishers also earning a 2008 breeding season to one of three Adena Springs stallions. Even-money favorite Your Flame In Me was quickest out of the gate and pulled ahead to a 1 1/2 length lead after a quarter in a quick 22.97. 2-1 second choice Silver Knockers moved up to challenge on the turn and poked her head in front at the top of the stretch after a half in 45.85. Your Flame In Me faded from the hot early pace, as Silver Knockers pulled away to a 3 length lead with a furlong to go. However, 8-1 Time's Mistress, who sat back in fifth on a ground-saving path, closed well through the lane, passing Silver Knockers at the 70 yard pole and then pulled away to win by 1 3/4 lengths in 1:10.53. It was 3 3/4 lengths back to Richwoman in third, while favorite Your Flame In Me was fifth.
Full results chart 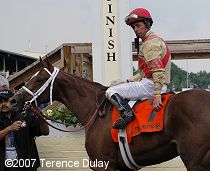 Time's Mistress in the winner's circle. Winning trainer D. Wayne Lukas said, "I was pleased with this. This was a good effort. This horse just had a horrific trip the last time. I think she's a little better at this distance. I think I'll keep her under a mile if I can." Jockey Mark Guidry added, "Wayne did a great job. I was just a passenger. She ran great. The pace was a little quicker than I anticipated, but they kind of collapsed on the front end." 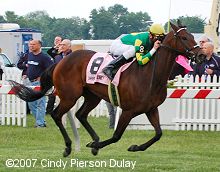 The $95,000 The Very One Stakes featured older fillies and mares sprinting 5 furlongs on the turf. 4-5 favorite Unbridled Sidney ran to expectation, breaking the sharpest out of the gate, pulling away to a 3 length lead on the far turn, and then easily holding off all challengers at bay to prevail by 3 lengths over 7-1 Wild Berry in 55.77 over the firm course. 34-1 Keep On Talking was third. Winning trainer Ronny Werner said, "Everything went great, just like I was hoping it would. She came in here on Wednesday and settled in really quick. She's been sleeping a lot and eating a lot and everything went exactly the way we wanted it to go for her. She can sometimes be a handful."
Full results chart 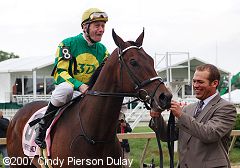 Jockey Calvin Borel looks elated to win his first race ever at Pimlico, or in Maryland for that matter, on his very first starter there. He said, "She has to be in front or one-two. She's got natural speed and she put me there. And Ronny put something in the tank for her that she gave me in the end. She just left there running and went about her business." 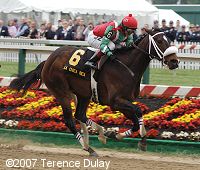 Kicking off the stakes action on Preakness weekend was the $95,000 Whimsical Stakes for older fillies and mares sprinting 6 furlongs on the main track. A compact field of just four went to the gate, after three scratched out. 5-1 longest shot La Chica Rica pulled off the upset, leading the field gate to wire, holding off the late move of 2-1 Homesteader to win by 1/2 a length in 1:10.99. It was 5 lengths back to even-money favorite Waytotheleft in third. Winning trainer Crystal Pickett said, "This filly is very unique and she just comes out of the gate running, just like her dad. She came off a strong workout, and I knew she was definitely ready to go. She's come a long way since being a $20,000 claimer." Jockey Jozbin Santana added, "As soon as the other speed in the race scratched, I knew I could clear the lead in a few strides. When I put her on the rail, she really relaxed. When she's on the lead and relaxed on the lead today, that's her at her best."
Full results chart