The big show at Pimlico on Saturday was the Preakness Stakes, the second leg of racing's Triple Crown. However, the Preakness was not the only important race of the day. Eight stakes races were carded that afternoon, giving local horses and other divisions a chance to shine before the crowd of 100,268 on hand and the millions more watching on television at home and at simulcast sites. Despite the rain-soaked conditions, only one race was taken off the turf, the Woodlawn Stakes early on the card. The turf stakes were contested over a course initially rated yielding but downgraded to soft during the day. The dirt course started the day as sloppy, was upgraded to muddy by the first stakes race, and finally was rated as good by fifth race. 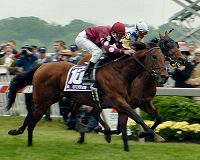 The Grade 2 Citgo Dixie Handicap, a 1 1/8 mile turf event for 3 year olds and up, featured a short field of six, scratched down from 10 because of the deep going. The longest shot on the board, 18.70-1 Dr. Brendler, shocked the public with a four-wide last to first move at the top of the stretch to win by 1/2 a length over 2-1 second choice Perfect Soul, in a time of 1:57.78. It was 3 1/2 lengths back to the next longest shot, Sardaukar at 18.60, who just nosed out heavy 4-5 favorite Del Mar Show for the third spot. The winner paid $39.40 to win and capped a $947.20 trifecta. Winning trainer H. Graham Motion said, "My horse ran a big race today. He loves the soft ground and cool weather. He's a classy underachiever who runs well when running back quickly." He will make his next start at Churchill Downs in just 2 weeks. Results chart Race 10 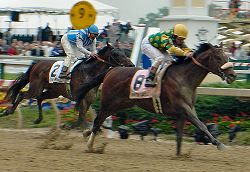 The Grade 3 William Donald Schaefer Handicap is a 1 1/8 mile race for older horses. Eight horses faced the starter, with one scratch. 5-1 fourth choice Windsor Castle stalked the pace in fourth for the first 3/4 mile, circled four wide on the far turn, and quickly surged to the front in the final 3/16 to win by 1 3/4 over Changeintheweather, in a final time of 1:50.08 over the track rated good. It was another 1 3/4 lengths back to third place finisher Tempest Fugit, while 5-2 favorite Strive disappointed in seventh. Windsor Castle paid $11.40 for the win. Winning jockey Jose Santos said, "I know where the best part of the track is now. We want to try for the double," referring to the Preakness Stakes which he won an hour later aboard Funny Cide. Results chart Race 11 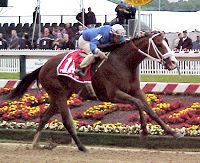 The Grade 3 Maryland Breeders' Cup Handicap featured the sprinters, going 6 furlongs over the main track which was rated muddy at the time. Owner Michael J. Gill sent out a three-horse entry of Pioneer Boy, Tasty Caberneigh, and Highway Prospector, and as a single betting interest were sent off as the 3-5 favorites in the field of seven (5 betting interests). Pioneer Boy, after acting up while being saddled on the track, broke slow but was quickly hustled to the front and led every call, holding off the late rally of 7-2 third choice Sassy Hound, in a time of 1:10.35. Gill's other two horses dead-heated for third. The entry paid $3.40 to win. Winning trainer Jerry Robb said, "This race started out bad. I had to wrestle with him out in the mud just to get the tack on him. Then he broke flat-footed and was still able to win. He was all upset in the paddock and that's what made him mad. Maybe that's the key to this horse, he gets scared and maybe that's what makes him run so fast." Results chart Race 4 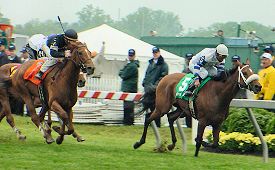 The Grade 3 Gallorette Handicap was carded for older fillies and mares going 1 1/16 miles over the soft turf course. The field was cut in half when seven horses were scratched due to the weather. 6-1 shot Carib Lady stalked the early pace, split foes at the top of the stretch, and prevailed by a neck in a hard drive over 3-1 second choice Affirmed Dancer. It was 3/4 length back to 13-1 longshot Lady of the Future. 3-2 favorite Saranac Lake obviously did not like the wet course and finished sixth. Winning jockey Pat Valenzuela said that trainer Todd Pletcher "said to put her behind horses and let her coast along and then let her pick it up. That's exactly what she did. I coasted behind the leaders, around the turn I moved up behind them. I got lucky enough to get through and from there she ran a great race." Results chart Race 7 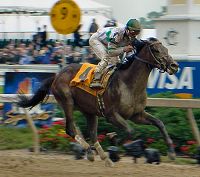 The $100,000 Sir Barton Stakes, a 1 1/16 mile event for three year olds, took on increased importance when last year's winner Sarava went on to upset the Belmont Stakes in his next start. This year, just five horses faced the starter when three scratched out. 7-2 second choice Best Minister rated along the inside early, rallied on the far turn, and, catching the field off-guard, exploded past everybody at the top of the stretch and drew off to win by three lengths over 7-5 favorite During, in a time of 1:43.96 over the "good" surface. Like Sarava, Best Minister is piloted by Edgar Prado and trained by Ken McPeek. Prado said afterward, "I just wanted to sit behind and bide my time. I was very impressed with his win last time, and, as far as the Belmont goes, you never know until the very end." McPeek's assistant Helen Pitts added, "He learned a lot from the race and is developing well." Results chart Race 9 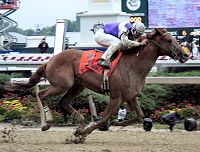 The $100,000 Hirsch Jacobs Stakes, an event for three year old sprinters going six furlongs, featured a contentious field of eight horses with no scratches. 7-2 second choice Mt. Carson took advantage of a very taxing speed duel ahead of him while rating three wide early, then rallied inside the final furlong to leave the tiring pacesetters behind, winning by 2 1/4 lengths over Gators N Bears in a time of 1:10.85. 2-1 favorite Get Smarter finished sixth. Winning jockey Ramon Dominguez said, "The horse broke very sharply. I let him sit behind the speed duel. He drifted off the inside going around the turn because the track is a little heavy on the rail. I had a clear shot at the top of the stretch and he just exploded and won with something left." Trainer Rodney Jenkins wants to try him on the turf next. Results chart Race 6 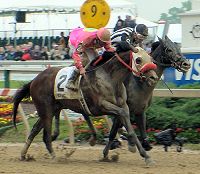 The $100,000 Woodlawn Stakes for three year olds was originally scheduled for 1 1/16 miles on turf, but was switched to the main track which led to seven scratches, reducing th field to just five. 8-1 shot Gang bumped with even-money favorite Christmas Away at the start and trailed the field until the top of the stretch. Swinging out five wide, he closed strongly in the final 3/16 just getting up at the line over 7-1 shot Sigint. It was four lengths back to pacesetter Breanna's Smile in third. Gang paid $18.80 to win and capped a $331 trifecta. Winning trainer Randy Allen said, "When the track came up muddy I knew we had a good chance. We wanted the turf but I'll take what we got." Results chart Race 5