The Pimlico Special and
The Black-Eyed Susan Stakes

Traditionally the Friday before the Preakness is Black-Eyed Susan day for the 3-year-old fillies. This year the Maryland Jockey Club reinstated the Pimlico Special after a two-year hiatus and decided to include it on Black-Eyed Susan Day along with the Pimlico Breeders' Cup Distaff Handicap for the older fillies. Unfortunately, the weather didn't co-operate with the festivities, with cold weather and persistent rain all day putting a huge dent in attendance as well as moving all the turf races off to dirt and cancelling the Grade 1 steeplechase event. Only 16,513 showed up at Pimlico as a result.

The main event of the afternoon was the Grade 1 Pimlico Special, a handicap for older horses over the Preakness distance of 1 3/16 miles. A field of nine faced the starter in the $600,000 event, including 6-5 favorite Mineshaft and Triple Crown veteran Balto Star who was sent off at 4-1. When the gate opened, Balto Star was sent to the front and led the field through the first half mile, setting fractions of 23.09 and 46.79 over the sloppy track. 7-2 second choiuce Western Pride stalked him in second and inherited the lead when Balto Star dropped out of contention, going 3/4 in 1:11.12. Turning for home, Mineshaft, who had stalked the pace saving ground early, eased out three wide on the far turn and charged down the stretch passing Western Pride after a mile in 1:36.40 to win going away by 3 3/4 lengths in a final time of 1:56.16. It was a head back to 42-1 longshot Judge's Case.

Winning jockey Robby Albarado said, "He's not just making steps, he's making leaps with every start. If the Breeders' Cup Classic was this week he'd have to be one of the favorites." When asked about the wet Pimlico track, he said, "He's run over a number of different tracks, Keeneland, Fair Grounds, Churchill, all different courses in their own way. He's handled them all well so I didn't think today would be a problem."

Winning trainer Neil Howard said, "We've always thought the world of the horse. The reason why he's a good horse is that he's a model of consistency. He looks like a good horse, he acts like a good horse. Today was a big step. It's a big relief [to get his first Grade 1 win], these are the things that Mr. and Mrs. Farish strive for." The plan is to send him to the Stephen Foster Handicap at Churchill Downs for his next start.

The Grade 2, $200,000 Black-Eyed Susan Stakes, a 1 1/8 mile event for three-year-old fillies, featured heavy favorite Santa Catarina, sent off at 4-5 in the field of eight. Challenging her were 3-1 second choice Ivanavinalot and 7-2 third choice Roar Emotion.

Roar Emotion broke alertly and set the pace two off the rail, with fractions of 23.20, 47.71, and 1:12.23 for the first six furlongs. Ivanavinalot and 57-1 longshot Blushing Valleys stalked the pace early. However, those two could not keep up by the top of the stretch. Santa Catarina, in fourth early, moved up turning for home gaining second, but was no match for the pacesetter. 13-1 longshot Fircroft came on from seventh picking up momentum with 3 furlongs left to run, but her late rally came up just 1/2 a length short, with Roar Emotion getting the win in gate-to-wire style in 1:52.33. It was another 8 1/2 lengths back to Santa Catarina.

Winning trainer Carlos Martin said, "She's a big filly and needed time to mature, and we needed patience getting her to the races. She has speed and we had the right horse, the right distance, and the best jockey in the world. She was getting tired at the end but she really held on and got the job done."

Trainer Bob Baffert of beaten favorite Santa Catarina said, "She looked and acted great in the paddock but I knew she was in trouble at the 1/4 pole. We had a wide trip but I don't know why she didn't finish stronger." 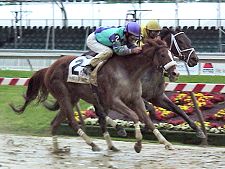 In the Grade 3, $150,000 Pimlico Breeders' Cup Distaff, Mandy's Gold was sent off as the 4-5 odds-on favorite in a compact field of just four, when three were scratched because of the weather. 13-1 longshot Dance the Slew led the field through the first half mile, with fractions of 23.76 and 47.71 with 7-2 third choice Stormy Frolic stalking to her outside. Dance the Slew relinquished the lead to Stormy Frolic after 6 furlongs on 1:12.72, but that would be short-lived. 8-5 second choice Summer Colony, slowest out of the gate, closed three wide on the far turn and got the lead a furlong from home. However, Mandy's Gold, last turning for home, closed determinedly down the lane and wore down Summer Colony in the final strides to win by a neck, covering the 1 1/16 miles in 1:46.32. It was another 3 3/4 back to Stormy Frolic, and 1 1/2 lengths to last place finisher Dance the Slew. 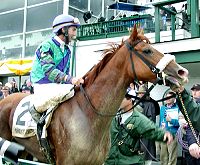 Winning trainer Michael Gorham said, "She had a hard year last year and bled a touch. She really needed some time off and we gave it to her. She came back strong and this race proved it. She got trapped back and inside. I was hoping she would get out sooner and when she did, [jockey] Jerry [Bailey] did a great job of getting her home."

Mark Hennig, trainer of second place finisher Summer Colony, said, "She's a hard filly to get fit. I thought we had her as fit as possible but it was obvious she ran out of air a little bit the final 1/16. On a normal track I think she would have been fine." 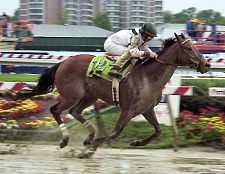 In the $75,000 Very One Stakes, the original field of fourteen scratched down to just 6 runners when the 5 furlong turf event was moved to the main track because of the wet conditions. 3-5 favorite Forest Heiress charged through an opening in mid stretch and drew off inside the 1/8 pole to win by seven lengths in a time of 45.63 over 2-1 second choice Maria's Mirage. 20-1 longshot New Years Eve Gala was third. Traiiner Bill Mott said, "I wasn't worried about the track conditions. If I were, we wouldn't have run. The horse handled an off track in her last start and Pat [Day, jockey] did everything right again." 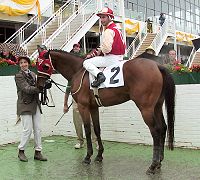 The weather didn't cooperate but the two human and two equine actors provided a perfect ending to a reenactment of the famous Pimlico Special match race between Seabiscuit and War Admiral. Once again Seabiscuit won by four lengths. Pimlico-based jockey Walter Cullum played George Woolf on Grapeshot who was Seabiscuit for a day. Frank Douglas was Charles Kurtsinger on Lord Roland who played War Admiral. Both horses are trained by Ann Merryman.