Preakness weekend at Pimlico is always busy with lots of traditions and other happenings. Here are some photos that you may find interesting of some of the non-racing events and celebrities. 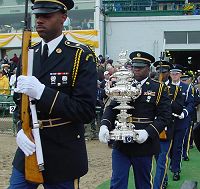 The National Guard carries the permanent Preakness trophy, the Woodlawn Vase, and the smaller replica for the owner over to the winner's circle. The Woodlawn Vase is considered the most valuable trophy in sports and was appraised at over $1 million in the 1980's. 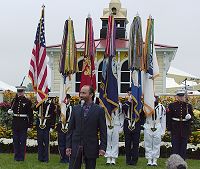 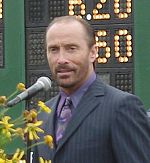 A tribute to the soldiers in Iraq included a color guard from all branches of the armed forces and Lee Greenwood singing "God Bless the USA". 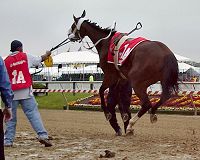 Pioneer Boy gets airborn while being saddled for the Grade 3 Maryland Breeders' Cup. His trainer Jerry Robb said, "This race started out bad. I had to wrestle with him out in the mud just to get the tack on him. Then he broke flat-footed and was still able to win. He was all upset in the paddock and that's what made him mad. Maybe that's the key to this horse, he gets scared and maybe that's what makes him run so fast." 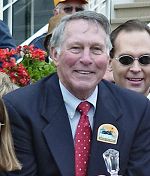 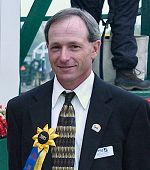 Retired jockey Steve Cauthen who won the the Triple Crown in 1978 aboard Affirmed was there to celebrate the 25th anniversary of that victory. 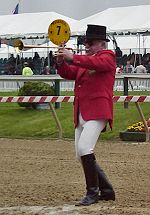 Bugler Joe Kelly was in fine form as usual adding his jazzy touch to the call to the post. 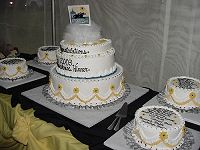 The cake for the Preakness winner at the post-race party by the stakes barn. The four smaller cakes have the names of all the 2003 Preakness horses, owners, trainers, and jockeys on them.