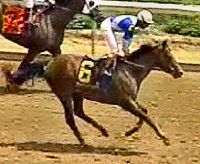 Kicking off the stakes action on Derby Day was the Grade 2 Churchill Downs Handicap over seven furlongs for older horses. 6-5 favorite Aldebaran came from well off the pace with a seven wide move on the turn to collar Pass Rush inside the final furlong to win going away by 2 1/2 lengths. The winning time was 1:21.80. It was another neck back to 80-1 longshot Cappuchino. Jockey Jerry Bailey said: "He was really rolling today. I think this was his best race. He beat some good horses here. As long as Bobby Frankel is in the trainer's column, I know I’ve got a good shot." Results chart Race 5 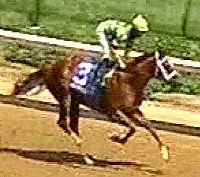 The two year olds made their first stakes appearances in the Three Chimneys Juvenile over five furlongs. 6.60-1 shot Limehouse initially refused to load into the gate but once the race was on, he was all business, setling in fourth early, splitting rivals on the turn, and then drew off from 24-1 pacesetter El Sysco Kid for a 1 1/4 length win in 57.47. 1-2 odds-on favorite Heckle disappointed back in fifth. Trainer Todd Pletcher said: "He was green in his first start and some of the things in that race were of his own doing. He improved a lot today and broke better." Results chart Race 6 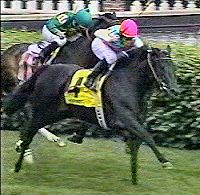 The action moved to the turf course for the Grade 3 Citgo Distaff Turf Mile. 5-2 second choice Heat Haze came from eleventh and last for the first half mile, going eight wide for the drive to get the lead inside the eighth pole and win going away by 1 1/2 lengths. Final time was 1:33.96 over the firm course with Quick Tip in second and Sentimental Value third while 2-1 favorite Dedication was fourth. This race was trainer Bobby Frankel's second stakes victory of the day. He said: "I was happy when she broke so slow. I wanted him to take her back anyway. That way she wouldn't get caught up in the pack and get bumped around." Results chart Race 7 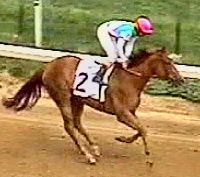 Frankel made it two in a row and three on the card when his 4-5 favorite Sightseek captured the Grade 1 Humana Distaff Handicap. Jerry Bailey settled the Juddmonte Farms homebred behind the leaders in fifth early, then at the top of the lane, split rivals and drew off to win by 4 1/2 widening lengths over 3-1 second choice Gold Mover in a time of 1:22.12 for the 7 furlongs. Frankel said: "I told the Prince [Khalid Abdullah] that ‘We got the Grade 1 out of the way.’ We wanted to win this one. Jerry Bailey rode a great race. That’s why you hire a guy like him. He makes the right decisions." Results chart Race 8 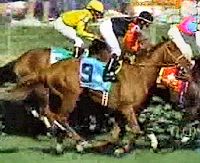 In the Grade 1 Woodford Reserve Turf Classic, old campaigner With Anticipation was sent off as the 2-1 favorite in the field of eight but it wasn't to be his day. 24-1 longshot Honor In War stalked the pace early in fourth then rallied to the inside on the far turn to win going away by 1 1/4 lengths over Requete. With Anticipation finished a disappointing fifth, having too much to do after trailing in last early. The final time was a quick 1:46.67 for the 1 1/8 mile event. Trainer Paul McGee said: "It just made sense to run here with as good as he’s been doing. His last race was so impressive. It was really this race or nothing. It’s great that his first stakes win could be a Grade 1. I’m not too surprised because he’s been doing so well, but I guess I’m pleasantly surprised." Results chart Race 9