On Friday May 2, a crowd of 100,523 was in attendance for the 129th running of the Grade 1 Kentucky Oaks at Churchill Downs, the fifth-largest ever. The bettors sent Lady Tak off as the slight 5-2 favorite over second choice Elloluv at almost 3-1, but longshot Bird Town proved to be the best today.

When the gate opened, expected pacesetter Elloluv was sent right to the front by jockey Robby Albarado, and she led the procession through initial fractions of 23.09, 46.08, and 1:10.15 for the first six furlongs. 46-1 longshot Tempus Fugit tried to keep up with her but faded quickly after the half, as did My Boston Gal. The brisk pace set the race up for the closers. Turning for home, 6-1 chance Santa Catarina, unhurried back in seventh early, went five wide and got the lead briefly with a furlong to go after a mile in 1:35.67. 18-1 longshot Birdtown, who stumbled at the start and raced back in eighth first time past the stands, rallied six wide into the lane after and exchanging brushes with Santa Catarina drew clear inside the final furlong. She won going away by 3 1/4 lengths in a final time of 1:48.64 for the 1 1/8 mile feature. It was a head back to 7-1 chance Yell who was bumped and had to check sharply in the first turn, but angled five wide late to get up for third my 3/4 length over Elloluv. Favorite Lady Tak disappointed, finishing sixth.

Trainer Nick Zito, who has won two Kentucky Derbies but is celebrating his first Oaks win, said, "To me, this is the same feeling as winning the Derby. We just wanted her to run her normal race close to the pace but she stumbled." Zito indicated Bird Town's next start will be in the Mother Goose Stakes at Belmont Park.

Jockey Edgar Prado said, "She stumbled very badly at the start and I got bounced around pretty good. But she showed tremendous determination and a great will to win when she rallied. I lost some position early in the race, but I don't think I lost the faith."

Winning owner-breeder Marylou Whitney said, "This is a homebred and Nick knows, I love my homebreds. I just love her. Don't give up on your mares. They might not produce the first few times, but you might get some luck. You never know what's going to happen." 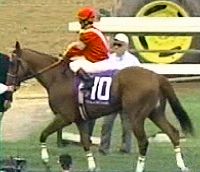 Fiscally Speaking was the upset winner of the Aegon Turf Sprint at odds of 47-1, setting a new stakes record of 56:01. He settled off the early pace of Mighty Beau in 5th early and rallied in the stretch to get up by a head. Mighty Beau faded to 4th as Morluc and Testify got up for 2nd and 3rd. Trainer Carl Nafzger said: "Whoo! I told (jockey) Jon (Court) he'd run better than he did the last time (the Shakertown at Keeneland). He ran green and only got beat a length and a quarter. I told him if he breaks and he runs his race, he'll run better than he did over there." Results chart Race 7 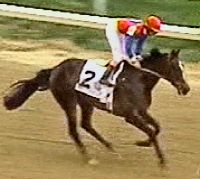 You was a commanding winner in the Lousiville Breeders' Cup Handicap. The result was never in doubt as she ran head to head with Fly Borboleta with Bailey sitting chilly. As they headed in to the final turn, he roused her, gave he a few taps, and she drew off to win by 7 3/4 lengths over Fly Borboleta. Seven Four Seven was another length back in third. Trainer Bobby Frankel said: "Let's cut to the chase: when Take Charge Lady came out, she just outclassed those other fillies. The only way she was going to lose today was to fall down. And part of it is her style. She didn't have to come from way out of it to win. She was the speed of the field." Results chart Race 8 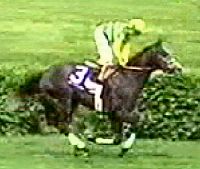 Senor Swinger made his turf debut a victorious one, taking the Crown Royal American Turf with a late rush on the outside to win going away. Unhurried early in 7th position, he swung to the far outside in the stretch and ran down the leaders late to take off and win by 2 1/2 lengths over Renind and Foufa's Warrior.
Results chart Race 9