The $1 million Pegasus World Cup Turf Invitational (G1) presented by Runhappy was contested on Saturday afternoon at Gulfstream Park in south Florida. Conditions were excellent in South Florida, with sunny skies and temperatures in the mid 70's, with the turf course firm. A field of 12 older horses went to post for this 1 3/16 mile contest, all racing without race day medications. Without Parole was sent off as the 3-1 favorite off his third place finish in the Breeders' Cup Mile (G1). In to challenge him included 7-2 second choice and last year's runner-up Magic Wand off her close second in the Hong Kong Cup (G1), and 9-2 third choice Mo Forza, winner of 4 straight incuding the Twilight Derby (G2), Hollywood Derby (G1), and Mathis Brothers Mile (G2).

Jockey Ryan Moore sent Magic Wand to the lead first time by and she set fractions of 24.06, 48.45, and 1:11.94 while pressed by 30-1 Henley's Joy and stalked by 54-1 Next Shares and Without Parole. Entering the stretch Magic Wand continued to lead through 1 mile in 1:34.82. 12-1 Zulu Alpha, 10th early under Tyler Gaffalione, came through along the rail to win going away by 2 lengths in 1:51.60, just 1/5 second off the course record. It was a neck back to 10-1 Instilled Regard third, while favorite Without Parole tired late to finish 11th beaten 8 lengths. 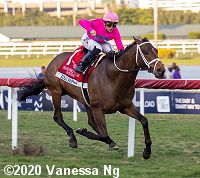 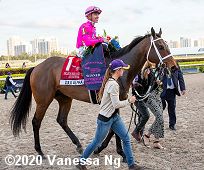 Left: Zulu Alpha in the winner's circle. Winning trainer Mike Maker said, "For a million dollars you have to take a shot and it paid off. Just a great horse. I thought he got unlucky in the Breeders' Cup or he might have gotten a bigger slice there. He got some time off after that and he really thrived coming in."

Right: Zulu Alpha heads to the winner's circle. Winning owner Michael Hui said, "When he shot up the rail I screamed my lungs out. I just watched, stood and screamed. It's just an unbelievable feeling. I never thought I would win a Grade 1." 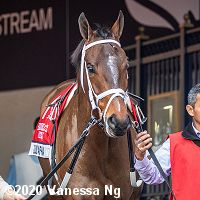 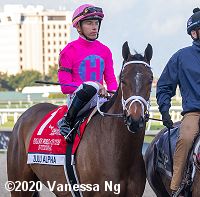 Left: Zulu Alpha in the paddock. Winning jockey Tyler Gaffalione said, "The horse broke well and the speed set up in front of us. I was able to let my horse settle. They just kept opening up and I didn't see any reason to go around them so we just stayed on the fence, and he really exploded down in there and finished the job. He honestly got more competitive down in there."

Right: Zulu Alpha in the post parade. Maker added, "I was just hoping that Tyler would get out. But he saved all the ground and he got lucky." 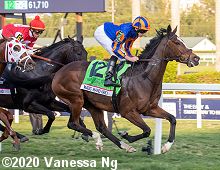 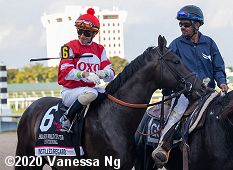 Left: Second place finisher Magic Wand leads first time by. Jockey Ryan Moore said, "She ran super, she's an uncomplicated filly and it's a shame she got beat. But she ran lovely."

Right: Third place finisher Instilled Regard in the post parade. Jockey Irad Ortiz Jr. said, "I had a perfect trip. He just couldn't get it done. He got out of there and he did everything he could today. He's a nice horse; he's improving. The winner was much the best today. He got through there and he exploded." Owner Larry Best added, "It's not a win, but it's a good show. He had no problem with the distance. I think we may have to get him going down the stretch a little earlier. He loves to close. But he needed probably to get going a little earlier. But Irad had a great trip with him. Irad did a great job. It just wasn't our day." 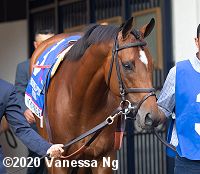 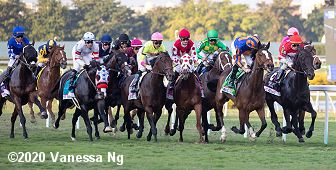 Left: 11th place finisher and beaten favorite Without Parole in the paddock. Jockey Frankie Dettori said, "I know he ran in the Breeders' Cup, but two turns is quite a new road for him. He has been running straight courses all his life. The distance was fine for him. I think he'll do better when he has more experience around two turns." Trainer Chad Brown added, "[Without Parole] is not a big horse, and he was between horses. He was getting bumped the whole way and he resented it. He wanted out of there."

Right: Shortly after the start of the Pegasus Turf.