Pegasus World Cup (G1) day at Gulfstream Park was conducted under typical racing conditions for south Florida in winter -- sunny skies and temperatures in the mid 70's, with the 1 1/8 mile main track rated fast and the 1 mile turf course firm. There were 7 stakes races on the undercard, 4 of which were graded. 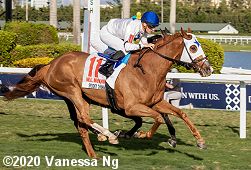 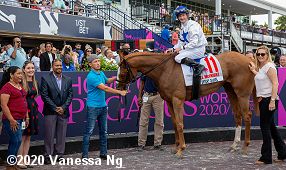 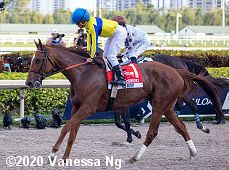 Left: Spooky Channel in the winner's circle. Winning trainer Brian Lynch said, "I thought his last race beaten three lengths in the Fort Lauderdale with those horses was a great effort for a horse that wants to stay a mile and a half, a mile and three-quarters. He's a marathon horse and it's nice to get him out of Turf Paradise and let him show he can fit with these horses out here, because that was a field of good field of stayers right there." Jockey Julien Leparoux added, "He broke pretty good from the outside and got covered up on the first turn. I decided to make a move early on because the way the track is playing and he kept going all the way to the wire."

Right: Fourth place finisher and beaten favorite Red Knight returns after the race. The Bill Mott trainee has a record of 7 wins, 5 seconds, and 1 third in 19 starts, earning $537,658 for owner-breeder Trinity Farm. 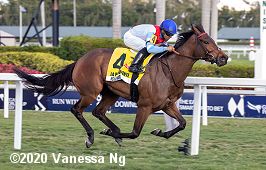 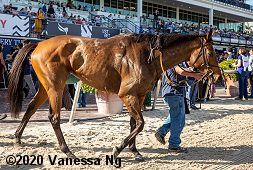 Left: Mean Mary in the winner's circle. Winning trainer Graham Motion said, "Luis came into the paddock and he said he was going to ask her away from the gate. I said, 'Luis, you're not going to have to ask her, she's going to be on the lead.' He did a beautiful job and he slowed it right down. When they went :17, I was feeling pretty good because I didn't think the distance would be a problem." Jockey Luis Saez added, "I look behind me at the three-eighths and there were two or three guys I saw right there and I still felt comfortable because I had a lot of horse. I knew she was going to take off when I came to the stretch. She switched leads and she made it look easy."

Right: Mean Mary heads back to the barn after the race. 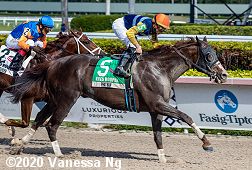 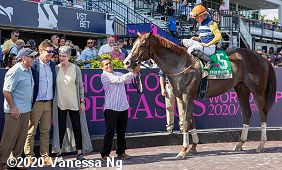 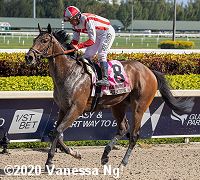 Left: Phat Man in the winner's circle. Winning trainer Kent Sweezey, celebrating his first graded stakes win said, "These people (owners) had horses with me before anyone else did. If I could win a race for anybody, it would be these guys. He gained weight out of his last race and we worked him a couple times in between, which I would not have done on a normal horse coming back in a month. I'd usually just give an easy work or two. But we drilled him a bit. He got tired last time and I wanted to make sure he was fit. If he's going to be able to run on this day, he's got to work for it, so I wanted to make sure I got to the bottom of him. That's a (former boss) Jimmy Jerkens move – when you have a dirt horse, you really have to breeze and crank on them. If he was going to be go run with those horses, he'd better be darn sure fit." 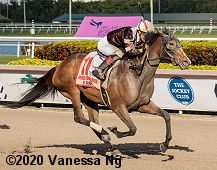 A field of 12 older fillies and mares contested the $200,000 Inside Information Stakes (G2) presented by Runhappy Matchmaker Series at 7 furlongs on the main track. Go For Wand Handicap (G3) winner Spiced Perfection was sent off as the 8-5 favorite over 4-1 Nonna Madeline, 5th in the Frizette (G1), and 9-2 Wildwood's Beauty, 2nd in the City of Ocala Florida Sire Stakes. 44-1 Liza Star and 15-2 Blamed dueled out the chute through fractions of 22.47 and 45.34 while stalked by 16-1 J P's Delight and 15-1 A Bit of Both. Turning for home, the pacesetters tired as Spiced Perfection moved up from 8th to lead through 3/4 in 1:10.50 before tiring. 5-1 fourth choice Pink Sands, last early under Jose Ortiz, circled the field to win going away by 3 lengths over Wildwood's Beauty in 1:23.42. It was another 1 3/4 back to Nonna Madeline third, and a neck more to favorite Spiced Perfection fourth. 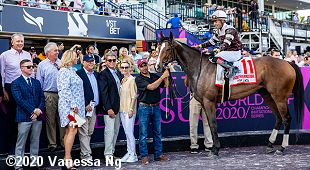 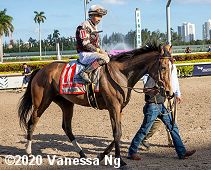 Left: Pink Sands in the winner's circle. Winning jockey Jose Ortiz said, "She's a come-from-behind filly, I can't change that. But I was expecting a hot pace. I saw it was 45 and change; I was expecting like 44. But she was traveling well. I didn't fall asleep on her and I tried to be as close as I could without taking her out of her rhythm. When she got to the quarter pole, she started rolling. I was just waiting for some room and when she got it, she was there for me." 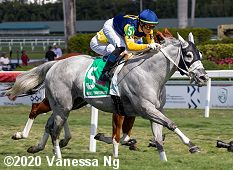 The $150,000 Ladies' Turf Sprint Stakes featured a field of 9 older fillies and mares going 5 furlongs on the turf. 6-5 favorite Girls Know Best led through fractions of 21.68 and 43.70 while pressed by 5-2 second choice Jean Elizabeth and stalked by 5-1 third choice Keota. In the stretch, jockey Irad Ortiz Kr. sent Jean Elizabeth 2 wide for room and she outfinished Girls Know Best to win by 1/2 a length in 55.26. It was another 2 lengths back to Keota third. 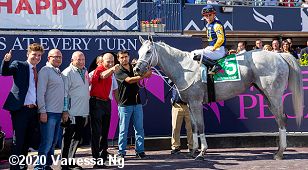 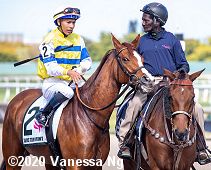 Left: Jean Elizabeth heads to the winner's circle. Winning jockey Irad Ortiz Jr. said, "I rode her last time, and she beat the favorite on dirt. I was told the filly would like the turf, so I rode her with confidence. Today, I let her settle a little bit, and at the quarter-pole, I asked her and she was there for me." Trainer Larry Rivelli by phone added, "I'm watching my son play hockey in Youngstown, Ohio. What a mare, huh? I've always thought she'd like the turf, and she came out firing." 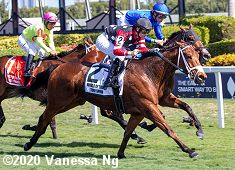 Kicking off the stakes action on Saturday was the $150,000 World of Trouble Turf Sprint for older horses going 5 furlongs on the turf. 19-2 Pay any Price set the pace of 21.68 while pressed by 9-2 second choice Carotari and 1-2 favorite Shekky Shebaz. Turning for home, Carotari took over the lead through 4f in 44.20 but 5-1 third choice Texas Wedge, 5th early under Flavien Prat, rallied late to win by a neck in 55.84. It was another 3/4 length back to late-running 25-1 Fielder third, and a head more to favorite Shekky Shebaz fourth. 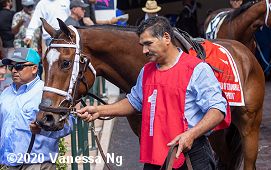 Left: Texas Wedge in the winner's circle. Winning trainer Peter Miller said, "Great ride, great trip. Flavien's a great jockey. This horse, giving six pounds to the runner-up and he's not a big horse, it did its job and evened the race out. I'm just really proud of the horse. He ran a big race. He's a great little gelding. We bought him for $30,000 at OBS and I just couldn't be prouder of the horse and my whole team. It was a great job by everyone." Jockey Flavien Prat added, "We were behind the horse to beat. I was able to move around at the quarter-pole and then he was game to catch the leader."

Right: Fourth place finisher and beaten favorite Shekky Shebaz in the paddock. The Jason Servis trainee has a record of 6 wins, 5 seconds, and 3 thirds in 19 starts, earning $374,150 for ownes Michael Dubb, Madaket Stables, and Bethlehem Stables. 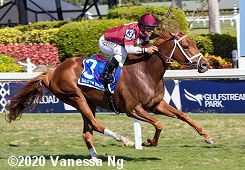 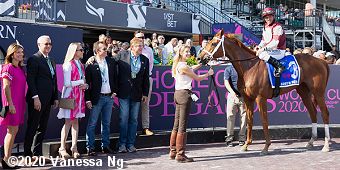 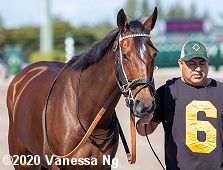 Left: Atomic Blonde heads to the winner's circle. Winning jockey Javier Castellano said, "Beautiful! I took advantage, took the easy way. I sit there, took my shot, cut the corner. It was a wonderful race."