Sunday was the final day of Breeders' Cup Challenge "Win and You're In" preps at Belmont Park. Conditions were typical for early October on Long Island, with overcast skies and temperatures in the high 60's, with the main track fast and the two turf courses firm. The feature race on Sunday was the $500,000 Flower Bowl (G1), with a field of 7 older fillies and mares going 1 1/4 miles on the inner turf course in this Win and You're In event for the Filly and Mare Turf. Last year's Breeders' Cup Filly and Mare Turf (G1) winner Sistercharlie was sent off as the 1-5 favorite off a 5 race winning streak including the Beverly D (G1) at Arlington last out. In to challenge her included 5-1 second choice Mrs. Sippy, winner of the Glens Falls (G2) at Saratoga, and 12-1 third choice Thais, 5th in the Beverly D. 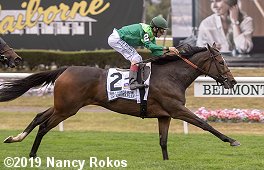 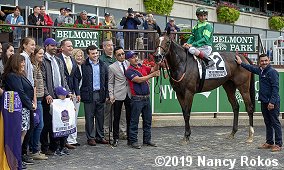 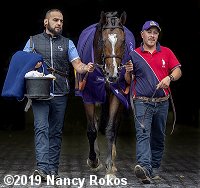 Left: Sistercharlie in the winner's circle. Winning trainer Chad Brown said, "We're very lucky to have her. She did everything she needed to do. She was 0-for-2 at Belmont going in. Even though it was only by short margins both times to two other of our nice horses, she was nevertheless winless here. The case could be made that this isn't her favorite course, but she got the job done. We're pretty confident [in the Breeders' Cup] as long as she stays healthy. I don't think we've reached the bottom of her. Some of the setbacks that she's had have been a bit disappointing, but it's kept her fresh so it really goes both ways."

Right: Sistercharlie heads back to the barn after the race. Winning jockey John Velazquez said, "She's been very good. She's done everything we've asked of her and I'm proud to be a part of it with Chad and Peter [Brant, owner]. She's incredible. I didn't feel like they were going very fast in front. The two horses in front of me kept slowing down and obviously [Thais] just opened up. She was on the bridle and she's never on the bridle. I tried to leave her where she was comfortable and let her go from there." 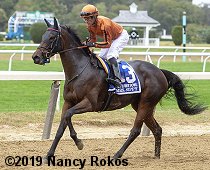 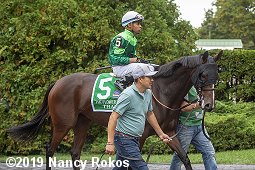 Left: Second place finisher Mrs. Sippy returns after the race. Jockey Joel Rosario said,  "She really put a nice run in at the end. I followed Sistercharlie the whole time and she dug in and came with a run, but Sistercharlie was just too strong. It was a nice race."

Right: Third place finisher Thais heads out of the paddock. Trainer Chad Brown said, "Her hanging on for third helps her cause (to go to the Breeders' Cup). If she gets, in we'll be discussing with Mr. Brant."

The $400,000 Frizette Stakes (G1) featured a field of seven 2-year-old fillies going 1 mile around 1 turn of the main track, looking for automatic entry into the Breeders' Cup Juvenile Fillies. Adirondack (G2) and Spinaway (G1) runner-up Frank's Rockette was sent off as the 5-2 favorite over 3-1 Wicked Whisper and 13-4 Daphne Moon, both coming off maiden wins at Saratoga in August. 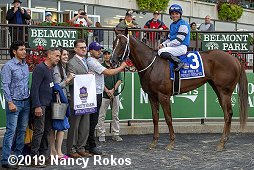 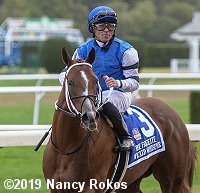 Left: Wicked Whisper in the winner's circle. Toby Sheets, assistant to winning trainer Steve Asmussen said, "She did everything perfectly. You could see by her ears she was just waiting and Joel just showed her the crop once and she ran great. She's a very nice and classy horse. She does everything correct. All I said to Joel was she's classy and 'good luck'. I didn't have any concerns because they were going easy. That was very easy for her and she finished great."

Right: Wicked Whisper returns after the race. Winning jockey Joel Rosario said, "She relaxed good and was able to have a little extra in the last part. There was a lot of speed. I was going to break and see; if someone went, maybe I lay second or third. She had nice cruising speed right away and I just decided to go on with her. Every time I asked her, she was there for me. It was her first time going a mile, so you just want something for the last part. She responded and just kept going. The more I asked, the more she was going. She looks like she's real spirited and looking around and enjoying herself." 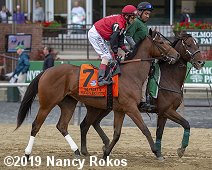 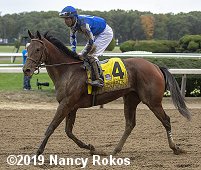 Left: Second place finisher beaten favorite Frank's Rockette in the post parade. Jockey John Velazquez said,  "She was real aggressive the first part of the race and I decided to stay there and lay fourth. I just sat there on the outside and made one run with her, and she ran really well. The other horse just got the better of us."


Kicking off the stakes trio was the $150,000 Futurity Stakes (G3), a Challenge event in the Juvenile Turf Sprint division for 2-year-olds going 6 furlongs on the Widener course. Rosie's Stakes winner Four Wheel Drive was the 9-10 favorite in the field of 6 over 5-1 Another Miracle, winner of the Skidmore Stakes, and 51-10 Embolden, winner of the Jamestown.

Jockey Jose Lezcano sent 13-2 Jack and Noah to the lead through fractions of 21.62 and 44.33 while pressed by Four Wheel Drive and stalked by Another Miracle. Entering the stretch, jockey Irad Ortiz Jr. sent Four Wheel Drive to lead through 5f inm 56.00. 11-2 fourth choice Freewheeler attempted to rally to no avail as Four Wheel Drive drew off to win by 3 lengths in 1:08.07. It was another 1/2 length back to Embolden third. 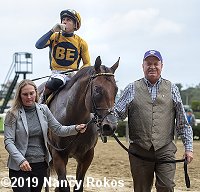 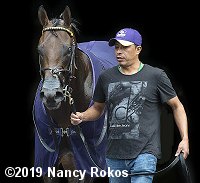 Left: Four Wheel Drive heads to the winner's circle. Winning owner Mike Hall said, "Hopefully, he comes out of the race well. It will be our first Breeders' Cup starter. We had Shang Shang Shang last year, but he came up a little off the day of the race, so hopefully, this one makes the dream come true. The plan was for him to just sit chilly. Irad knew he had a lot of horse. He just made his move when he needed to."

Right: Four Wheel Drive heads back to the barn after the race. Winning jockey Irad Ortiz Jr. said,  "I worked him before this race and I put him behind horses. He always worked good like that and relaxed. When I asked him, he would take off like an older horse. He has a good mind. So [today], I didn't panic. I just let him break wherever he is comfortable and then go from there because I know he didn't have to be on the lead. He relaxed well and when I asked, he turned on." 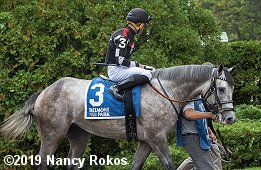 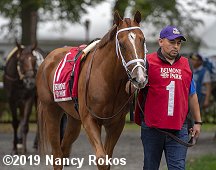 Left: Second place finisher Freewheeler heads out of the paddock before the race. The Todd Pletcher trainee improved his record to 1 win and 1 second in 2 starts, earning $72,900 for owner NK Racing.

Right: Third place finisher Embolden heads in the paddock before the race. The Mike Stidham trainee improved his record to 2 wins, 1 second, and 1 third in 4 starts, earning $117,000 for owner Dare to Dream Stable (Michael Faber).