Kentucky Oaks Day on Friday usually draws the second largest attendance of any raceday in North America, second only to the Kentucky Derby run the very next day. In contrast to the rain predicted for Derby day, it was sunny with temperatures around 70. Five graded stakes races were contested over the fast main track and good turf course on the Oaks undercard. 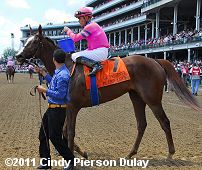 Blind Luck circles before going to the winner's circle. Her jockey Garrett Gomez said, "She was standing good (at the start) and then for some reason she fell to her head. But she got back up and got going. One of the positive things about it is that she wants to be back there (near the rear) anyway. I didn't have to rush her, just sort of ease up to them. When she came running late I still wasn't sure if we'd get there. (Unrivaled Belle) is tough and a fighter, so I didn't know if we were home or not. But my filly wants to win. She's tough. And we got on by."

Trainer Jerry Hollendorfer added, "We had trouble in the beginning, she overcame it and I am very proud of her. We never lost confidence in her. I always thought it was circumstances that prevented her from getting another win. We never gave up on her. We gave her plenty of time to get ready this race. She came through for us big time." 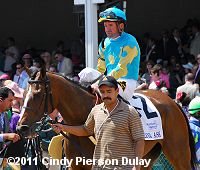 Diva Ash circles before going to the winner's circle. Her trainer Dale Romans said, "I knew there wasn't going to be a lot speed. Kent asked permission to let her run away from the gate if no one went with her and we said it would be fine. It ended up perfect because they were going so slow and he was out there. He just had too much horse left."

Jockey Kent Desormeaux added, "We thought if we could get the easy lead, take it. But I tell you, she was pressured all the way from the half-mile pole. She had to run so she was very capable. The pressure came at the half-mile pole and she was ready for the action."

The $100,000 Eight Belles Stakes (G3) featured a field of 10 three-year-old fillies sprinting 7 furlongs on the main track. Arienza, a daughter of Giant's Causeway out of Azeri, was the 5-2 favorite off her 2nd place finish in the Fantasy Stakes (G2). 4-1 Hoem Sweet Aspen went to the lead exiting the chute and set fractions of 22.02 and 44.57 while being stalked by 13-1 Honey Chile down the backstretch. On the turn, Honey Chile made her move and gained the lead through 3/4 in 1:09.84. However, she tired late as 7-1 Victoria's Wildcat, last early, rallied down the center of the course to win going away by 2 1/4 lengths over Home Sweet Aspen in 1:23.03. It was just a nose back to Honey Chile third, while Arienza failed to fire and was 8th. 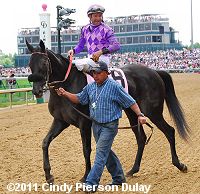 Victoria's Wildcat circles before going to the winner's circle. Her trainer Bob Hess said, "This is what we always thought we had, and it has finally all came together. She bruised her foot in January and we lost some time with her. She's going to be a neat filly the rest of the year and next year. She's very healthy. We'll sit down and talk about what's next - maybe something in New York or here."

Jockey Kent Desormeaux added, "Bob has been putting me on horses since 1990. It sure is good to win one for him. The first 100 yards out of the gate I got hazed. She was having trouble switching her leads and she fell back behind them. But she got it going and in the end it unfolded just like I'd hoped. It helps when you've got the horse to do it. It's like going for that hole and having the hole go faster than you. Today we were fast enough to get right on through." 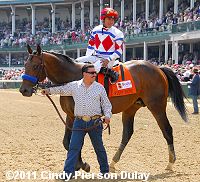 First Dude circles before going to the winner's circle. His trainer Bob Baffert said, "He wants to be rated. He likes to sit back there and I think he's going to be more effective coming from off the pace. I thought he got beat but that big head of his really came through in the end. I thought it was a great race for the horse. Dale (Romans) did a great job with him (last year) and, unfortunately, he was having to run against Lookin At Lucky last year. But now he's a big, solid, sound horse and he likes this track. I'm glad he won here. I'm just trying to get him to the Breeders' Cup."

Jockey Martin Garcia added, "Look at my silks. They're all clean. I had a perfect trip. It was real close at the finish, but I thought I had it. I had plenty of horse when I needed it. Mr. Bob (Baffert) said just let him run his own race. Let him be happy. So that's what I did. He was a happy horse today. Now we're all happy." 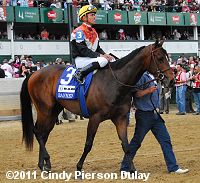 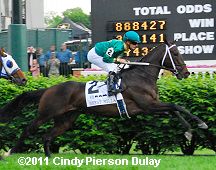 Left: Banned circles before going to the winner's circle. His jockey Garrett Gomez said, "He was really quiet in the post parade. He's usually keyed up. Out of the gate, he settled in really nice into the first turn. There was a lot of pace up front. On the backside, I made him move up a little bit and once I got him moving forward a bit, I felt like I was in striking distance of all of them. I felt if he came home the way he's supposed to, he'd be right there contending for the win at the end. I didn't think he'd make the lead so easily. I made the lead so fast, it took him by surprise."

Trainer Tom Proctor added, "He's always had talent and he ran big today. The speed in there went quick and kind of set it up for us. I didn't know if he could kick like that but I was glad to see it. I kind of enjoyed that one. By design we were trying to get off (the pace) but mostly I let it up to Garrett to be comfortable but I'd prefer to not get in a hurry."