Kentucky Derby Day is the biggest card of racing at Churchill Downs. Before the main event, there were five graded stakes contested over the main track and turf course before the record crowd of 164,858. Conditions were ideal, with overcast skies and temperatures in the mid 60's. 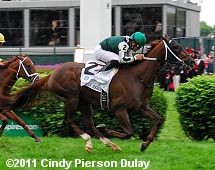 Kicking off the stakes action on Derby day was the $100,000 Twin Spires Turf Sprint Stakes (G3), featuring a field of 8 older horses going 5 furlongs on the turf. Breeders' Cup Turf Sprint (G2) winner Chamberlain Bridge was the 2-1 favorite over 5-2 Bridgetown. 29-1 longest shot Southern Region was quickest away and set early fractions of 21.89 and 44.89, before giving up the lead to Bridgetown at the 1/8 pole. However, 3-1 third choice Regally Ready, who stalked the pace in third, came out for room and drew away to a 1 1/4 length win over Bridgetown in 56.57 seconds over the firm turf. It was a long 3 1/4 lengths back to favorite Chamberlain Bridge third.
Results chart from DRF 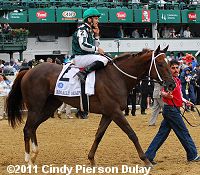 Regally Ready heads to the winner's circle. His trainer Steve Asmussen said, "With who was in the field and the draw he got, you knew he was going to have to show a different element. He didn't used to show this much speed and it never kept him from winning. He has run quite a bit recently so now we need to map out a plan that gets him back here for (the Breeders' Cup) the fall."

Jockey Corey Nakatani added, "I've just got so much confidence now when I ride for Steve. He and his team give you good horses and they put them in the right spots. And they're thinking this horse is only going to get better and be a Breeders' Cup horse by the end of the year." 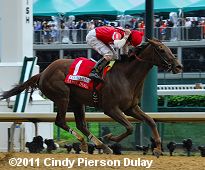 The first Grade 1 event on the card is the $300,000 Humana Distaff Stakes (G1), featuring older fillies and mares sprinting 7 furlongs on the main track. Inside Information Stakes (G2) winner Hilda's Passion was the 3-5 favorite in the field of 7 over 6-1 Amen Hallelujah. Jockey Javier Castellano sent Hilda's Passion to the lead exiting the chute and she set fractions of 22.29, 44.68, and 1:08.54 over the fast track. 16-1 Sassy Image, who sat back 5th early, came out 6 wide into the stretch and closed with a rush to pass the favorite inside the 1/8 pole to win going away by 3 lengths in 1:21.01. It was just 3/4 length back to Amen Hallelujah third.
Results chart from DRF 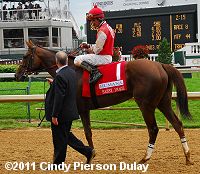 Sassy Image in the winner's circle. Her trainer Dale Romans said, "She loves it here; she loves Churchill. She just loves the surface. Robby rode her perfect. The race was quick enough up front that it set up just right for us. When he took her off the turn, she just exploded. Yes, the Breeders' Cup here in the fall is something to think about for sure."

Jockey Robby Albarado added, "It was a great setup. We had enough pace up in front of us to give her some room to clear them turning for home, running from the outside, and she just did all the work. It's unfortunate I got taken off (eventual winner Animal Kingdom) in the Derby but that's horse racing, you know, it happens." 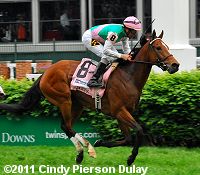 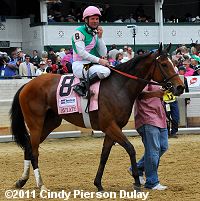 Aviate heads to the winner's circle. Her jockey Kent Desormeaux said, "She had a good clean trip; she was always on the bridle, very aggressive, in fact. I think her frame helped her tremendously with winning the race. She has a light frame, so she was able to skip over the top, whereas the bigger, heavier horses had to sink a lot deeper. It is still soft, so she enjoyed the soft going. I don't think she wants to get there as quick as I did in the last race, and I may have gotten there too soon today."

Trainer Bill Mott added, "It was a good pace and just enough cut in the ground where the closers had a chance today. It took her a race to get on track but it looked like a good effort on her part. I don't think she likes real soft ground but ground like this didn't seem to be a factor. Right now we'll probably look at the (Just a Game Stakes at Belmont Park)." 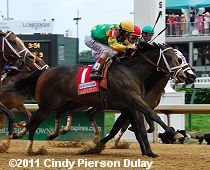 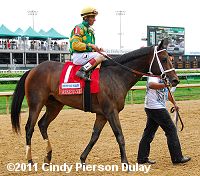 Aikenite heads to the winner's circle. His trainer Todd Pletcher said, "He's been doing really well lately and we were expecting a big effort today. The inside post was our main concern. We were afraid of getting stuck down inside there, but the race worked out where there was enough speed for John to maneuver and get out. This horse likes it outside and Johnny got him there. With the Breeders ' Cup here in the fall, I think we have some options with this horse."

Jockey John Velazquez added, "He gets excited inside so I worked my way out going to the 1/2 mile pole. I took him out where he was comfortable so when the 1/4 pole came I went around the horses and got him in the clear and he started running. When he got the lead he was hanging a little bit and the other horse came on the outside and that was just enough to get him to run another jump and get him to the wire." 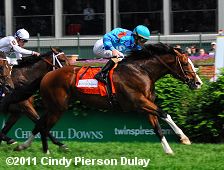 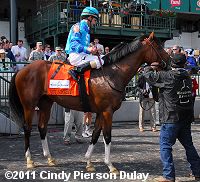 Get Stormy in the winner's circle. His trainer Tom Bush said, "We think we've got him back where he was and I think he's probably a better horse than he was when he was a 4-year-old. He won here as a 3-year-old in the fall so we knew he was OK with the turf. He had a few days galloping over here and he did very well. He stayed relaxed and I knew he was going to run real well today." Asked about the Breeders' Cup Mile he added, "You've got (2000 Guineas winner) Frankel and (3 time winner) Goldikova and (last year's runner-up) Gio Ponti but other than that, sure."

Jockey Ramon Dominguez added, "There was not a lot of speed on paper, and I sure everyone knew how rapid my horse can be. I was very pleased that we were able to get away with slow fractions and my horse was very relaxed. Turning for home, he really sprinted from the 3/8 pole to the wire."