The $1,000,000 Kentucky Oaks (G1) is the premier race in the country for 3-year-old fillies, and is the female counterpart to the Kentucky Derby. A field of 13 went to post in this 1 1/8 mile main track feature at Churchill Downs on Friday before 110,122, the third highest Oaks attendance in history. Joyful Victory was sent off as the 2-1 favorite off two straight wins at Oaklawn, the Honeybee (G3) and the Fantasy (G2). In to challenge her included 7-2 second choice Zazu, winner of the Las Virgenes (G1) before finishing a close second in the Santa Anita Oaks (G1), and 4-1 third choice Kathmanblu, third in the Ashland (G1) after winning the Rachel Alexandra (G3).

Jockey Gabriel Saez sent 14-1 Summer Soiree to the front first time past the stands and she set fractions of 23.65 46.99, and 1:11.25 while loose on the lead as many as 3 1/2 lengths ahead of 6-1 Plum Pretty who stalked her in second. Entering the stretch, Summer Soiree tired badly allowing Plum Pretty to inherit the lead at the 1/4 pole and opening up by 3 lengths at the 1/8 pole through a mile in 1:36.41. 16-1 St. John's River, who was 12th early, put in a strong late rally 6 wide but Plum Pretty held her off to get the win by a neck in 1:49.50 over the fast track. It was another 2 1/2 lengths back to Zazu third, while favorite Joyful Victory was another 1/2 length back in fourth. 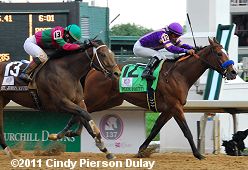 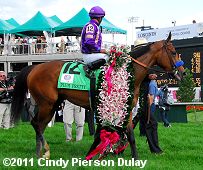 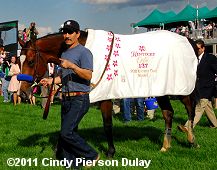 Left: Plum Pretty circles with her flowers before entering the winner's circle. Her trainer Bob Baffert said, "That was awesome. We hoped she'd run like that. She thought she was at Sunland Park. The filly has been a gift to us. When I saw her coming down the stretch, I said, 'My goodness.' It’s been a long time between drinks with Silverbulletday. You’ve got to enjoy these moments."

Right: Plum Pretty heads back to the barn after the race. Her owner John Fort said, "I can say that the last half-hour has been the most emotional, most exciting, and most gratifying moments of my life." 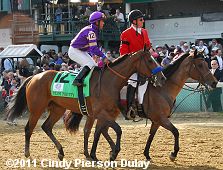 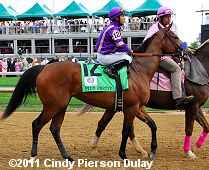 Left: Plum Pretty parades for the fans after the race. Her jockey Martin Garcia said, "Great trip. Great filly. I couldn't have asked for more. She has relaxed so well for me in the mornings. When I ask her to go, she just takes off. When I got to the quarter pole, I had so much horse. That was a very impressive win by her." 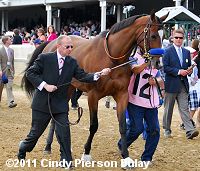 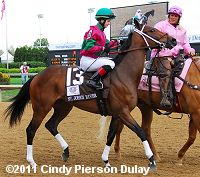 Left: Plum Pretty heads into the paddock before the race.

Right: Second place finisher St. John's River in the post parade. Her jockey Rosie Napravnik said, "She must not have been square because it was just an awkward step first out (hit the side of the starting gate stall). Not having that good break, I decided to angle over and see what we could do from there. We got such a perfect trip down on the rail. Down the lane I'm thinking my first Grade 1, I'm thinking a million dollars, I'm thinking Kentucky Oaks, I'm thinking Girl Power in the Oaks. It was such a disappointing loss, but you can't take anything away from the filly. She ran so well." 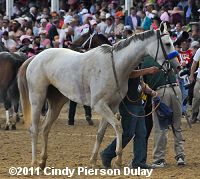 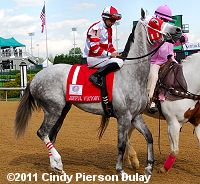 Left: Third place finisher Zazu after the race. Her trainer John Sadler said, "It was a good strong race for her and we're pleased. She didn't have the best of trips. That first turn got jammed up pretty good with that big field. But she kept on and she was finishing well at the finish. That was very encouraging. All in all, we're very proud of her."

Right: Fourth place finisher and beaten favorite Joyful Victory in the post parade. Her jockey Mike Smith said, "I would have liked to have been on the outside. It would have helped her because she is a big ol' filly. She likes to get her legs stretched out and I wasn't able to do that. I tried to kick on and she did for a couple of jumps but she didn't stay on. It was tight early on though. I would have had to really fight and bang around to try and get out early but I thought I would waste too much energy doing that. I rode her with confidence, had her clear going for home but just didn't have enough horse."

The Oaks field goes by shortly after the start with Summer Soiree in front and eventual winner Plum Pretty second. Summer Soiree's trainer Graham Motion said, "I think when she got bumped coming out of the gate I kind of knew we were in trouble because that was sure to make her very aggressive. That's kind of what happened. My hope was that he could kind of sneak away from there and keep her relaxed, but it wasn't to be. The bump was enough to get her very on the muscle. I think Gabriel (Saez) felt like he had her, but when she got bumped he was in trouble."