Kentucky Oaks Day on Friday usually draws the second largest attendance of any raceday in North America, second only to the Kentucky Derby run the very next day. Overnight rains rendered the main track sloppy and the turf course yielding for the start of the card, but the condition was later upgraded as the tracks dried. There were 4 races on the undercard of the Oaks, run under overcast skies and temperatures in the low 70's before a Churchill Downs crowd of 104,867.

Kicking off the stakes action on Oaks day is the $100,000 Aegon Turf Sprint (G3) for older horses sprinting 5 furlongs on the turf. 14-1 Jazz Nation opened up a clear lead down the backstretch through a quarter in 22.32 over the yielding course, with 3-1 Smart Enough and 9-5 favorite Chamberlain Bridge stalking him the whole way. Turning for home, Jazz Nation tired and faded to last, allowing Smart Enough to draw clear by 2 1/2 lengths with a furlong remaining, getting the half in 44.90. However, Chamberlain Bridge and 3-1 Cannonball closed on the outside to pass him in the final strides. Chamberlain Bridge prevailed by a neck over Cannonball in 57.06, and it was just 1/2 a length back to Smart Enough third.
Full results chart from DRF 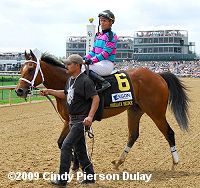 Chamberlain Bridge circles after the race. His trainer Bret Calhoun said, "I thought we might be the lone speed in there. But he was fractious in the gate, and he broke a little tardy. I was concerned all the way down the backside because he's never run like that. I thought we weren't going to get anything. This was the first time he's shown us a different dimension, and it wasn't by design. But he loves this turf course." Chamberlain Bridge improved his record to 9 wins, 2 seconds, and 5 thirds in 18 starts, earning $395,469 for owner Carl R. Moore Management LLC.

The $350,000 Louisville Stakes (G2) features older fillies and mares going 1 1/16 miles on the main track. Expected favorite Zenyatta scratched due to the wet track. 1-2 favorite One Caroline broke quickest of all and was allowed an uncontested lead of as many as 5 lengths through fractions of 23.96, 47.65, and 1:11.72 over the muddy track, with 8-1 Swift Temper and 9-1 Miss Isella battling for second. Entering the lane, Miss Isella came through on the rail to challenge for the lead. The pair hooked up at the 3/16 pole and after battling the length of the stretch, Miss Isella pulled away by 3/4 length in 1:42.75. It was a long 8 1/4 lengths back to Swift Temper third.
Full results chart 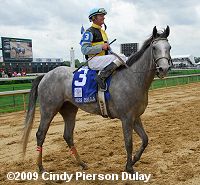 Miss Isella heads for the winner's circle. The 9-1 fourth choice saved ground on the inside early under regular rider Calvin Borel, tracked the pacesetter into the stretch and came through on the rail to get the win. The Ian Wilkes trainee improved her record to 5 wins, 1 second, and 1 third in 14 starts, earning $436,733 for owner-breeder Domino Stud of Lexington, LLC. This win gave jockey Calvin Borel his 5th win in the Louisville Stakes, the most of any jockey ever. 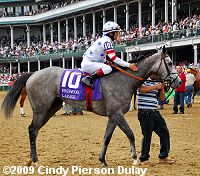 Jockey Edgar Prado gives Laragh a pat as she heads for the winner's circle. Prado said, "She is a very nice filly who has a lot of natural speed. We didn't want to take her out of her game. We went to the lead and she was nice and relaxed. I was just hoping she would have enough at the end and she did." Trainer John Terranova added, "As long as you don't fight her, she'll give you everything she's got. Edgar rode her perfectly. She's big speed and she can carry it. When I saw the half in 48 it was all over." 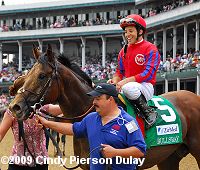 Jeremy Rose celebrates aboard Bullsbay after winning the Alysheba Stakes. Rose said, "The trip was perfect: I went right to the rail. I had a nice, big, strong horse that I figured if I could get his head in there even if they try to make it tight he's going to push them out of the way. I love having a horse like that as game like him." Alice Clapham, assistant to winning trainer Graham Motion added, "I think the reason they sent him here is to try him on dirt and see how he'd perform; it worked out great for him." 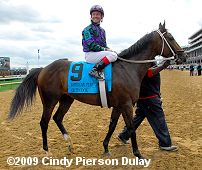 Jockey Jon Court looks pretty happy as Orthodox heads for the winner's circle. Winning owner-trainer John Glenney said, "He usually likes to be on the front end by himself, the lone speed. But in the paddock, Jon and I agreed that he didn't need the lead. Jon got him to relax behind the speed horse, and he was running really well the whole way. He usually doesn't like to pass horses, but this time, the leader was backing up a bit and he inherited the lead. He knew what to do from there."