The $500,000 Kentucky Oaks (G1) at Churchill Downs is the most important race in America for 3-year-old fillies. After the scratch of Justwhistledixie, a field of just seven went to post for this 1 1/8 mile main track feature before a crowd of 104,867, the fourth largest in Oaks history, under cloudy skies and temperatures around 70. Rachel Alexandra was sent off as the 3-10 favorite, coming to Louisville off four straight wins, all in stakes company, including an 8 3/4 length romp in the Fantasy at Oaklawn last out. In to challenge her included 5-1 second choice Flying Spur, second to Rachel Alexandra in the Fair Grounds Oaks in his last start, and 8-1 third choice Gabby's Golden Gal, winner of the Sunland Park Oaks by 13 lengths and making her graded stakes debut.

Gabby's Golden Gal was quickest away and was sent to the lead immediately by jockey Victor Espinoza, as she set a pace of 23.75, 47.46, and 1:11.81 over the fast main track. Rachel Alexandra sat 1 1/2 lengths off the pace in second, just to her outside. Turning for home, jockey Calvin Borel nudged Rachel Alexandra and she eased on past the pacesetter to take over the lead at the 1/4 pole. Once in front of the tiring Gabby's Golden Gal, she found another gear that she didn't need, sprinting away from the field to win by a record margin of 20 1/4 lengths in a time of 1:48.87, just 0.33 seconds off Bird Town's stakes record. 25-1 longest shot Stone Legacy closed from sixth to get 2nd place, 4 1/4 lengths ahead of Flying Spur who raced midpack the whole way and could not improve position. 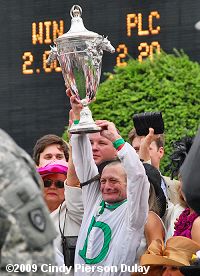 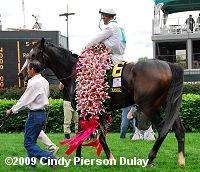 Left: Jockey Calvin Borel celebrates in the winner's circle with the Oaks trophy. Borel said, "To tell you the truth I'm happy they didn't run her (in the Derby). I think they did the right thing by running her today, but I do think she would have won it. She's probably the greatest horse I've ever been on in my life. There are other things down the road for her and she'll prove it, I promise it. This filly she breaks out of the gate and she's like 'Bring it on, let's go!'"

Right: Rachel Alexandra heads for the winner's circle made up of 135 cancer survivors. 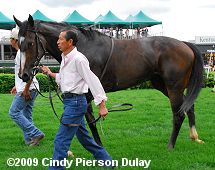 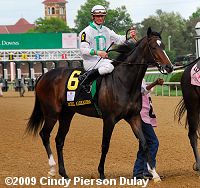 Left: Rachel Alexandra in the post parade. Her trainer Hal Wiggins said, "If you watched the race you saw it. It was just unbelievable. I was a little worried about Baffert's filly (Gabby's Golden Gal) on the lead like that, but Calvin said, 'I had everything under control.' When he asked her, she just naturally took off. And just finished tremendous. It looked like she came out of the race really, really good. That's the main thing."

Right: Rachel Alexandra heads back to the barn after the race. Her breeder and co-owner Dolphus Morrison said about why Rachel Alexandra did not run in the Derby, "No sir, the Triple Crown races are to showcase the future stallions of our industry and fillies should run with fillies and stallions with stallions." 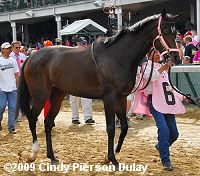 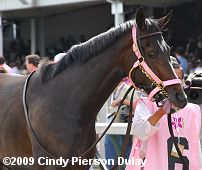 Rachel Alexandra on the walk over from the barn before the race. Trainer Hal Wiggins said, "Her last four races have been like that. Of course, this is the most important, a Grade 1 win for a filly. The owner still owns the dam, so that's very important. And I've trained for the man for 30 years. It's a good feeling to me for him to be able to experience this. We're not going to look back (on the decision not go to in the Derby), we're not going to have any regrets." 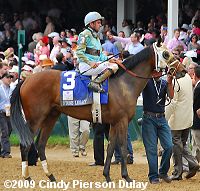 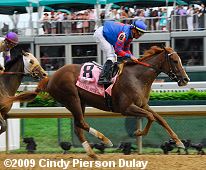 Left: Second place finisher Stone Legacy returns after the race. Her trainer D. Wayne Lukas said, "I thought Be Fair (4th) would be the stronger of the entry but I was really pleased. The way the pace developed it really set up for Stone Legacy. We are tickled. (Owner) Marylou Whitney has won this race in the past and now to get another second is great. Second is what everyone was lining up for today. There is no disgrace to get beat by the winner. The pace scenario didn't really matter because once Rachel Alexandra took off, the front-runner was of no consequence."

Right: Third place finisher Flying Spur crosses the finish line. Her trainer Bill Mott said, "It meant a lot to be third in this race. Third was great for our filly who looked like she would drop out of it, but then made a run. That's some super filly who won." Jockey Garrett Gomez added, "She struggled the whole time trying to keep up. In the middle of turn, I got into her pretty good. I wasn't going anywhere, so I kind of let her regroup and she found some more and was able to get third. The filly who won it is something else." 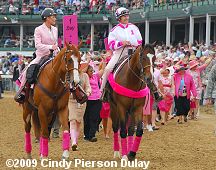 Left: Donna Barton Brothers (left) and Patty Cooksey lead a parade of 135 cancer survivors over before the Oaks. They stood in a horseshoe shape to form a winner's circle on the turf course after the race. 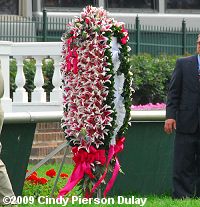 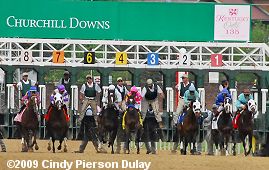 Left: The blanket of Stargazer Lilies waits for the Oaks winner.

Right: The fillies break from the gate for the 135th Kentucky Oaks.