The $500,000 Joe Hirsch Turf Classic Invitational (G1) is the major eastern prep for the Breeders' Cup Turf. A field of 9 older horses contested this 1 1/2 mile trip over Belmont Park's Widener Turf Course, with Paddo O'Prado sent off as the 7-5 favorite off three straight wins, in the Colonial Turf Cup (G2), Virginia Derby (G2), and Secretariat Stakes (G1). In to challenge him included 7-2 second choice Winchester, winner of the Manhattan Handicap (G1) but third in the United Nations (G1) and second in the Bowling Green (G2), and 6-1 third choice Never on Sunday, winless since last May but a close secod in the Pan American (G3) last out.

Jockey Jose Lezcano sent 22-1 Interpatation to the lead first time past the stands and he set slow fractions of 25.58, 52.98, 1:20.37, and 1:46.38, while pressed by 21-1 Strike a Deal and 12-1 Treat Gently in a tightly bunched field. On the far turn, Interpatation tired allowing Strike a Deal to take a short lead at the 1/4 pole through 10 furlongs in 2:11.23. Paddo O'Prado, 7th early, came out widest of all into the stretch, gaining the front at the 1/8 pole. However, Winchester, unhurried near the back of the field early, closed with a rush to pass the favorite late, getting the 1 length victory in 2:36.09 over the yielding turf. It was just 1/2 a length back to late-running 23-1 longest shot Grassy third. 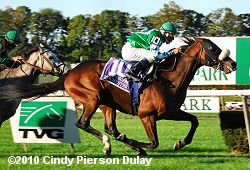 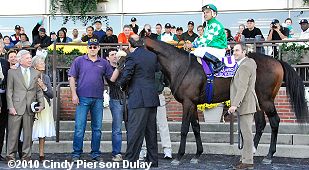 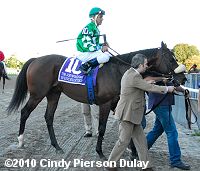 Left: Winchester wouldn't stand still in the winner's circle. His trainer Christophe Clement is holding his head trying to settle him while owners Mr. and Mrs. Bertram R. Firestone look on. Clement said, "When the ground is soft, either they like it or they don't. He won the Manhattan on very firm ground, which slightly puzzled me because I've always thought he was better with a cut in the ground. We're very lucky to have won a Grade 1 on both types of turf. I think after this race, as long as he trains well, we'll have to think about the Breeders' Cup (Turf)."

Right: Winchester circles after the race. 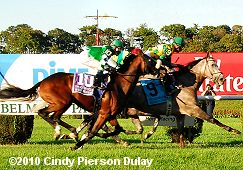 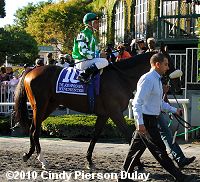 Left: Winchester and Paddy O'Prado trail as they pass by for the first time. His jockey Cornelio Velasquez said, "The track is very soft so my horse was more comfortable getting covered up. Then in the last quarter I put him in the clear, and he finished very well. I followed Kent Desormeaux (aboard Paddy O'Prado) almost the whole race."

Right: Winchester heads out of the paddock before the race. 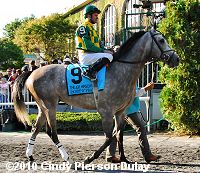 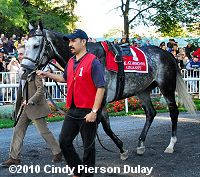 Left: Second place finisher and beaten favorite Paddy O'Prado heads out of the paddock. His trainer Dale Romans said, "You've got to be pleased with him. Off to Louisville, as far as I'm concerned. It's up to Jerry (owner Crawford) – he'll have final say – but I saw enough to say he could be in the big one. We might have moved a little bit early, but as Kent said it was an unusual race with that kind of pace scenario and the soft turf." end."

Right: Third place finisher Grassy in the paddock before the race. His jockey Garrett Gomez said, "He ran really good. I thought he would like the soft [course]. He handled it beautifully. He made a nice run. When Desormeaux made that run (with Paddy O'Prado), he couldn't quite get with him, but he ran well."