The $350,000 Vosburgh Stakes (G1) is the major eastern prep for the Breeders' Cup Sprint prep. A field of nine older horses contested this 6 furlong main track event, with Girolamo sent off as the 2-1 favorite off a fifth place finish in the Forego (G1) last out, his first start off an extended layoff. In to challenge him included 7-2 second choice Driven by Success, winner of the Vic Ziegel Memorial last out, and 4-1 third choice Snapshot, fifth in the Smile Sprint Handicap (G2) after finishing second in the True North Handicap (G2).

Jockey Alan Garcia sent Girolamo to the front and he battled for the lead with 12-1 Wall Street Wonder through fractions of 22.56 and 45.26 down the backstretch, with Snapshot and 7-1 Riley Tucker stalking them third and fourth early. Entering the stretch, Snapshot and Wall Street Wonder tired, allowing Girolamo to open a 1 length lead on Riley Tucker at the 1/8 pole. The favorite drew off in the final furlong to win by 2 1/2 lengths in 1:09.41 over the fast track. It was just 1/2 a length back from Riley Tucker to late-running 9-1 Wildcat Brief third. 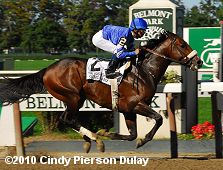 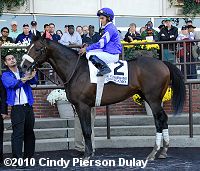 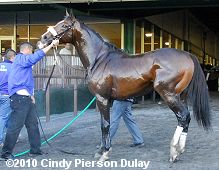 Left: Girolamo in the winner's circle. Rick Mettee, assistant to trainer Saeed bin Suroor said, "We got the comeback race in him (in the Forego). It wasn't the race we thought we'd get, but at least we got a comeback race in him. He was spot on from a fitness standpoint today and when (Riley Tucker) challenged him in mid-stretch, he didn't hang like he did in the Forego. I just got off the phone with (bin Suroor) and we have multiple horses possible for the Breeders' Cup (Dirt) Mile, so a lot depends on what Regal Ransom does tomorrow. We have Gayego, and Vineyard Haven also, but he's not a Breeders' Cup nominee, so a lot is going to depend on Regal Ransom in the Kelso tomorrow."

Right: Girolamo gets hosed off after the race. 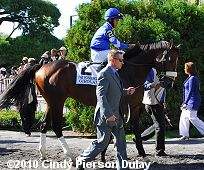 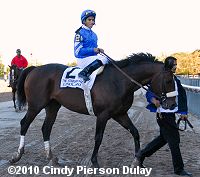 Left: Girolamo heads out of the paddock before the race. His jockey Alan Garcia said, "When we came around the turn I started looking for a place to get out because I didn't want to be stuck on the inside," Garcia said "Towards the end of the race he was in hand and just cruising. In the end, he showed his class and won the race."

Right: Girolamo returns after the race. 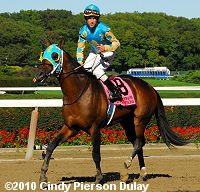 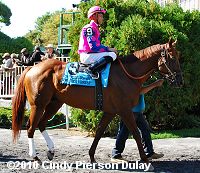 Left: Second place finisher Riley Tucker returns after the race. His jockey Ramon Dominguez said, "I got excited turning for home because I had a lot of horse, but so did the winner. My horse ran a good race and I'm proud of him."

Right: Third place finisher Wildcat Brief heads out of the paddock. His trainer Ben Perkins Jr. said, "He ran well. We were obviously happy with the way he finished. I think being on the outside like that, he kind of got away from the horses a little bit and he just didn't get himself engaged. Usually if he's 5,6,7 lengths off, he's fine. That's what (jockey Garrett Gomez) said, it's just hard to get him interested. Then he said he finally did grab the bit and when he leveled off he had a good finish." 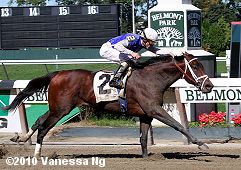 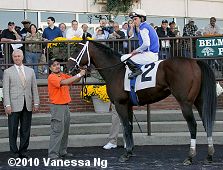 Kicking off the stakes action on Gold Cup day was the $70,000 Star of Cozzene Stakes for 3-year-olds going 1 1/16 miles on the main track. The 2-horse entry of Our Dark Knight and Jackson Bend was sent off as the even-money favorite over 2-1 Stormy's Majesty and 6-1 Brother Bird. The entrymates battled for the lead with Brother Bird in a tight bunch down the backstretch through fractions of 23.60, 47.84, and 1:12.12. Entering the stretch Jackson bend tired as Our Dark Knight continued to lead, but 8-1 Colizeo, 4th early, came out 4 wide for the drive to pass the pacesetters at the 3/16 pole, drawing off late to win by 3 lengths over late-running Stormy's Majesty in 1:43.05. It was another 3/4 lengths back to Our Dark Knight third.