The highlight of the Belmont Park Fall Championship Meeting is the $750,000 Jockey Club Gold Cup (G1), a major prep for the Breeders' Cup Classic, contested at the Classic distance of 1 1/4 miles on the main track. A field of just 6 older horses went to post on Saturday afternoon before 9,671 fans under sunny skies and temperatures in the mid 60's, with Blame sent off as the 4-5 fsvorite off a 5-race win streak, the last 2 in Grade 1 company in the Stephen Foster and Whitney handicaps. In to challenge him included 3-1 second choice Fly Down, runner-up in the Travers(G1) last out, and 7-2 third choice Rail Trip, second in the Hollywood Gold Cup (G1) after winning the Mervyn Leroy (G2) and Californian (G2).

Jockey Ramon Dominguez sent 7-1 fourth choice Haynesfield to the lead immediately, and he was allowed an uncontested lead of about 4 lengths down the backstretch through easy fractions of 24.63, 48.74, and 1:13.24 over the fast track. Rail Trip sat second while favorite Blame sat fourth about 6 lengths out. Haynesfield continued to lead into the stretch through 1 mile in 1:37.06 as Rail Trip tired. Haynesfield opened up by 7 lengths in mid-stretch, as Blame came out 4 wide for a futile late rally. Haynesfield cruised under the line 4 lengths clear, gate-to-wire in 2:02.48. It was another 2 lengths from Blame back to Fly Down third. 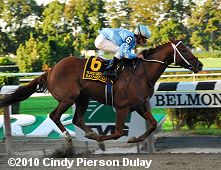 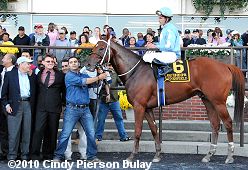 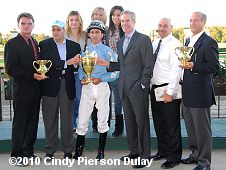 Left: Haynesfield in the winner's circle. His jockey Ramon Dominguez said, "It was clear that he was the speed in the race. So I just did my best to try and slow him down because he was pretty eager. I was so amazed when he hit the 1/2 mile pole and switched to his left lead, the way he wanted to sprint from there. I wasn't sure what to do because I didn't want to discourage him, but I didn't want him to open up even more on the field because it was too early in the race. So, I just slightly let him out some and then when he switched back to his right turning for home, he still had so much left in him."

Right: The trophy presentation for the Jockey Club Gold Cup 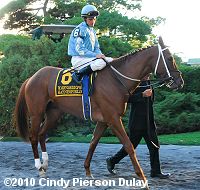 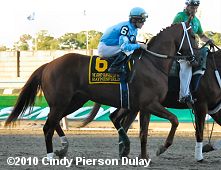 Left: Haynesfield heads out to the track. Toby Sheets, assistant to trainer Steve Asmussen said, "It means a lot for the horse. He goes out every day and puts out his all for us. I wasn't sure if he would get the 1 1/4 miles, but he's won at 1 1/8 miles and kept on going. He made it look easy. It was exciting (that) he saved it for home (at Belmont). We'll see how he comes out of it and decide what's next."

Right: Haynesfield warms up before the race. 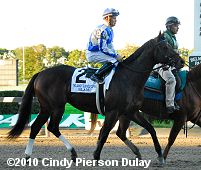 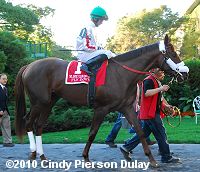 Left: Second place finisher and beaten favorite Blame warms up before the race. His jockey Garrett Gomez said, "I thought I was in a good spot as we headed up the backside. They slowed down the pace and I was moving along, but he wasn't taking me to them. Down the lane my horse never actually bore down because that horse was so far in front of him." His trainer Al Stall Jr. added, "There's not much you can do. That was another one of those races that was out of control. It reminded me of the (Super Derby last year when Blame finished second after a slow pace) and we did well after that. You can't win 'em all. We're in good shape though. He's had quite a bit of time off, so we'll be OK. We'll be all right."

Right: Third place finisher Fly Down heads out of the paddock before the race. His trainer Nick Zito said, "Obviously, (Haynesfield) was the lone speed. We wished there was someone to go with him. Haynesfield is a pretty good horse. He likes this track. If everything goes well, we would like to go (to the Breeders' Cup Classic). He's a 1 1/4 mile horse. Now, we have to hope he has a good month." Jockey Jose Lezcano added, "The track is playing a little bit speed-favoring, and the pace was slow. I let my horse sit back and make one run, but the horse on the lead never stopped running. My horse ran well."