The $1 million Travers Stakes (G1) is the highlight of the Saratoga meeting. Dubbed the "Midsummer Derby", it features the best 3-year-olds of the east coast going the classic trip of 1 1/4 miles on the main track. Conditions were ideal on Saturday afternoon with sunny skies, temperatures around 80, and a fast main track, drawing 45,764 fans to the historic upstate oval. Long Branch winner and Haskell Invitational (G1) runner-up Trappe Shot was sent off as the lukewarm 4-1 favorite in the contentious field of 11. In to challenge him included 9-2 second choice A Little Warm, winner of two straight including the Jim Dandy (G2) last out, and 6-1 third choice Fly Down, fifth in the Jim Dandy after finishing a close second in the Belmont (G1).

24-1 shot Miner's Reserve, saving ground on the rail, and 13-2 fourth choice First Dude on the outside, battled for the lead for the mile through fractions of 23.42, 47.25, and 1:11.39. A Little Warm stalked the pacesetters another 2 lengths back in third, while favorite Trappe Shot sat fourth. Entering the stretch, Miner's Reserve got the mile in 1:36.65 before fading to finish seventh. 7-1 Afleet Express, sixth early, and Fly Down, 9th early, closed with a rush on the outside, hooking up at the 1/8 pole to set up a duel to the line. The pair hit the line together in 2:03.28. The photo finish determined that Afleet Express nosed out Fly Down for the win, and it was a long 6 3/4 lengths back to First Dude third. Trappe Shot failed to rally when asked and finished 9th beaten 23 lengths. 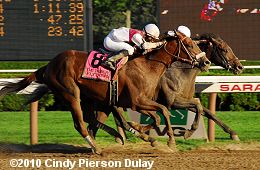 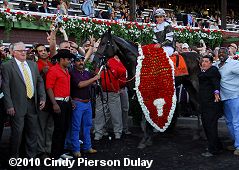 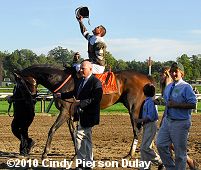 Left: Afleet Express in the winner's circle with trainer Jimmy Jerkens on the far left. Jerkens said, "He broke with the field and they went on pretty well ahead of him. He was tucked in pretty good behind him, and he was able to get through at a crucial time. I thought around the turn he was going to give himself a little breather, but he got to a certain spot and didn't drop back any. Javier wasn't moving his arms on him like he was in the Jim Dandy, and I felt we had a hell of a shot after that." 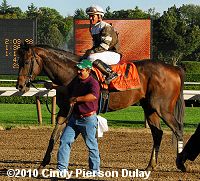 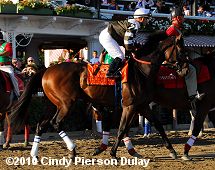 Right: Afleet Express heads out to the track for the post parade. His jockey Javier Castellano said, "Turning for home I was very carefully watching (Miner's Reserve) and we tried to squeeze through a little hole. I thought I'd win the race by the 1/8 pole, but he hung a little bit in the last part of the race, and I give credit to (Fly Down) for finishing very strong. I'm very lucky to get the bob and win the race. That photo could have gone either way, and I'm very lucky it went my way. I had a beautiful trip. I was very aware of the speed holding earlier in the card. My horse comes from behind. I wanted to get into position on the first turn, and hopefully, there would be a speed duel and the horses would come back to me. He gave me a couple of runs. 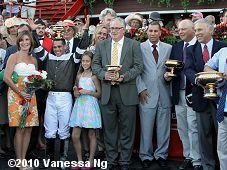 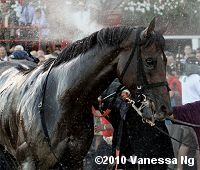 Left: Javier Casellano balances the trophy on his head at the trophy presentation. Castellano said, "Those photo finishes could go either way, and I got lucky. My lucky number is 7. As soon as we passed the wire, (Jose Lezcano) and I looked at each other. We were laughing, but our faces were kind of worried. I said, 'What do you think?' I guess I wanted to say, like Tom Durkin, too close to call."

Right: Afleet Express gets hosed down before heading to the barn. Trainer Jimmy Jerkens (center of the trophy presentation photo) said, This is probably the highlight (of my career), I'd have to say. At Saratoga it seems to be extra special. He probably learned something from (the Jim Dandy). When that horse crept up on him, I thought I saw him straighten out a little bit and give it another go. Win or lose, I was so happy with the way he ran." 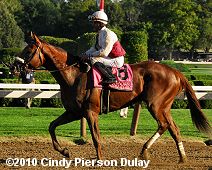 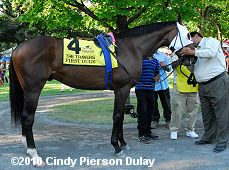 Left: Second place finisher Hold Me Back returns after the race. His trainer Nick Zito said, "That's another second. They're all tough. I can't explain it. Sometimes, like I say, you've got to be content. You've got to be grateful, but it's tough. I'm glad my horse ran his race. He ran a great race. When I saw the replay I thought the other horse had the bob. When they hit the wire, I was just hoping. But I've watched enough photos. It was really, really tough. It was unbelievable. This could have made everything. It's just the way the meet's been going for myself, and Jose (Lezcano). You've got to be grateful to have a horse run like this. It's sad that we didn't get in the winner's circle, but I salute Jimmy Jerkens and his connections. That's the way it goes. We had a shot at it, obviously. A real good shot. That's got to be one of the closest Travers ever.

Right: Third place finisher First Dude gets tacked up in the paddock. His trainer Dale Romans said, "He's an honest horse. He runs his race every time. Eventually he's going to run a breakthrough race and beat these guys." Jockey Ramon Dominguez added, "I wasn't in any hurry and I just let (Miner's Reserve) go in front of me. It always takes him awhile to get going, so he doesn't have the turn of foot you really want, but he does continue to fight on. He fought hard for third and that's always the case." 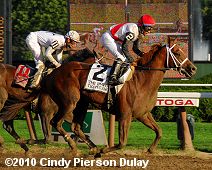 Left: Ninth place finisher and beaten favorite Trappe Shot crosses the line in 9th place, just in front of Kentucky Derby winner Super Saver. His jockey Alan Garcia said, "We had a good trip. The best horse won the race. I was sitting perfect to make the right move. When I asked him turning for home he was keeping the same pace."

Right: The start of the Travers where Trappe Shot (2) bumped with Admiral Alex (3) leading to both of them finishing poorly. Trainer Kiaran McLaughlin added, "It wasn't the distance. He had no real excuse. He just did not fire today."


The sprinting counterpart to the Travers is the $250,000 King's Bishop Stakes (G1), a 7 furlong trip for 3-year-olds. Amsterdam (G2) and Jersey Shore Stakes (G3) winner Discreetly Mine was sent off as the even-money favorite in the field of 7, over 3-1 second choice D'Funnybone, second in the Carry Back (G2) after winning the Woody Stephens (G2). Bulldogger, an allowance winner last out and making his stakes debut, was the 4-1 third choice on the board.

Discreetly Mine went the lead soon after the start and he set fractions of 21.90 and 44.11 under jockey John Velazquez, with Bulldogger pressing the pace in second a length behind and 7-1 Hurricane Ike stalking them in third.. Entering the stretch, Bulldogger tired badly allowing Discreetly Mine to open a 1 1/2 length lead over Hurricane Ike at the 1/8 pole. 9-1 Bank Merger, 5th early, put in a string 4-wide rally late but was left with too much ground to make up as Discreetly Mine cruised under the line 1 1/4 lengths in front in 1:23.16. It was another 2 lengths back to 45-1 longest shot Latigo Shore third. 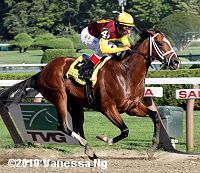 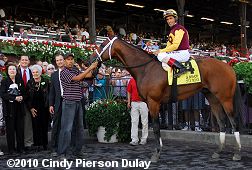 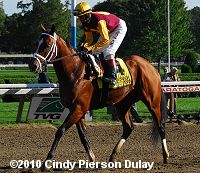 Left: Discreetly Mine in the winner's circle. His trainer Todd Pletcher said, "Any time you go 21, 44 and change for 7/8, that's pretty demanding. We were happy to hold on. We basically felt like we had to [go for the lead] the way the track was playing. We'd be inclined to train up to the Breeders' Cup. 26 days (since the Amsterdam), 123 pounds - he's spotting everyone but D' Funnybone significant weight, but he was gutsy enough to get it done."

Right: Discreetly Mine returns after the race. 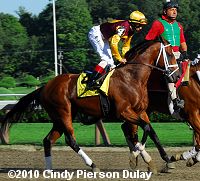 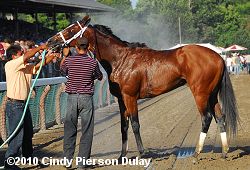 Left: Discreetly Mine in the post parade. His jockey John Velazquez said, "The plan was, if he broke well, to let him go away from there and let him do it. He was going well all the way, even though we were going pretty fast. I was hoping he'd be able to give me something down the stretch, and he gave me everything he had."

Right: Discretely Mine gets hosed off before heading to the barn. 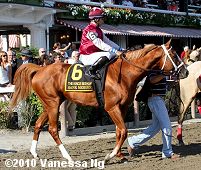 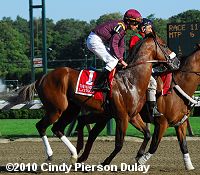 Left: Second place finisher Bank Merger heads out to the track before the race. His trainer Kiaran McLaughlin said, "We're happy to finish second with him. We're proud of him. He ran very well. Discreetly Mine is very special. He 's tough to beat." Jockey Alan Garcia added, "He broke very well and I decided to take him back a little bit to make his run, but (Discreetly Mine) was so far from us - it was hard for my horse and we got beat."

Right: Third place finisher Latigo Shore in the post parade. His jockey Ramon Dominguez said, "I knew the pace up front was going to be fast, especially with the way the track was playing. They got away from me early on a little more than I would have liked. I was hoping they would back up, and they did. When I asked him for run, he was there for me."