The first graded stakes race of Travers Stakes weekend was the $200,000 Bernard Baruch Handicap (G2) on Friday afternoon. A field of 7 older horses contested this 1 1/8 mile inner turf trip, under sunny skies before 21,654 fans. Get Stormy was sent off as the even-money choice off his win in the Fourstardave Handicap (G2) on August 1. In to challenge him included 9-2 second choice Baletti, 6th in the Monmouth Stakes (G3) last out after winning the Fort Marcy (G3), and 5-1 third choice Whatsthescript, 4th in the Fourstardave after finishing third in the Battlefield Stakes.

Jockey Julien Leparoux sent 8-1 fourth choice National Kid to the lead first time past the stands and he set fractions of 23.81, 47.23, and 1:10.90 while as many as 2 1/2 lengths in front of favorite Get Stormy who stalked the pace in second. Entering the stretch, Get Stormy closed the gap on the pacesetter, taking over a short lead at the 1/8 pole through 1 mile in 1:34.63. Get Stormy kicked away through the final furlong, winning by 2 3/4 lengths in 1:46.70 over the firm course. It was another length back from pacesetter National Kid to late-running 14-1 Radical Sabbatical third. 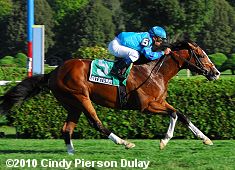 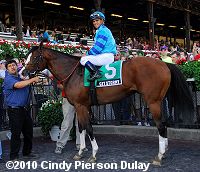 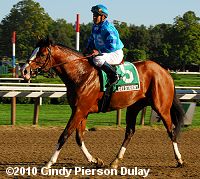 Left: Get Stormy in the winner's circle.

Right: Get Stormy returns after the race. Trainer Tom Bush said, "This horse is running fractions like he has never run in his life. He's obviously taken a step forward. I was pretty sure the other horse was faster, and Javier did the right thing he made him earn (the lead) a little bit. He kept the hedge going through the first two turns, then he stepped him outside a little bit. He rode absolutely exceptionally. This horse showed last year that he could definitely sit if he had to, and he certainly did that today." Bush said he will start next in the Shadwell Mile at Keeneland for his final prep before the Breeders' Cup Mile. 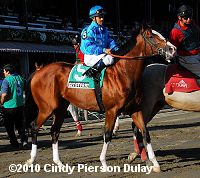 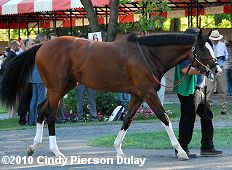 Left: Get Stormy heads out for the post parade. His jockey Javier Castellano said, "The last time I rode him, he settled pretty well. He's the type of horse you can do whatever you want with him. He relaxed, I think that was the key in the first part of the race. We were tucked in behind (National Kid). When I pushed the button, he took off. He had a lot left in the end. I was excited for him today because this was a mile and an eighth race today. The question was if he could handle the distance, and he did."

Right: Get Stormy in the paddock before the race. 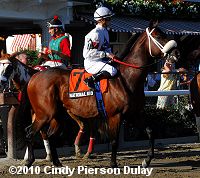 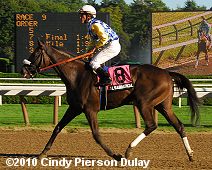 Left: Second place finisher National Kid heads out for the post parade. His trainer Richard Dutrow Jr. said, "I'm very happy with the way he ran today. As you can see he has some issues considering he's five and has only had five starts. We didn't plan on going to the lead. We planned on sitting off (Get Stormy), but I guess the other horse wanted to sit off us. That worked out OK for both of us."

Right: Third place finisher Radical Sabbatical returns after the race. His jockey Ramon Dominguez said, "I had a great trip. I was on the outside and going into the first turn I had to decide what to do and I chose to take a hold and take back so I didn't get caught wide. They went quick enough early in front where I had a nice pace to run at, and I was very happy with the way he finished up."