The first of three Grade 1 events on Travers Day at Saratoga Race Course is the $250,000 Ballerina Stakes (G1). A field of 8 older fillies and mares sprinted 7 furlongs on the main track, with last year's Breeders' Cup Filly and Mare Sprint winner Informed Decision sent off as the 9-4 favorite off two straight wins in the Chicago Handicap (G3) and the Windward Stakes. In to challenge her included 3-1 second choice Qualia, second in the Bed o'Roses Handicap (G3) last out, and 9-2 third choice Jessica is Back, off a win in the Princess Rooney Handicap (G1).

5-1 fourth choice Rightly So was sent to the front exiting the chute by jockey Cornelio Velasquez, and she set a quick pace of 22.26 and 44.80 with 6-1 Warbling stalking her in second 1 1/2 lengths behind. Jessica is Back sat third while favorite Informed Decision raced in midpack fourth. Entering the stretch, Rightly So continued to lead. Velasquez asked her for run and she powered away from the field, finishing 4 lengths in front in 1:22.58 over the fast track. Warbling held on to finish second by a neck over Jessica is Back, in turn a neck in front of 11-1 Devil by Design fourth. Favorite Informed Decision faded late to finish 6th. 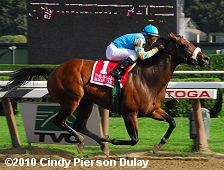 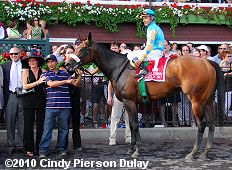 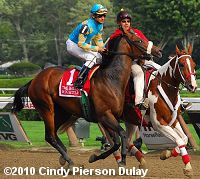 Left: Rightly So in the winner's circle. Her trainer Tony Dutrow said, "It was just a fantastic performance today. She's a filly who is capable of running fast the entire race. She outdid herself today. She's been an overachiever, and once again she raised her game to the top. We just couldn't be any prouder of her. Congratulations, Rightly So! I think the public was anticipating a speed duel. I thought that was a possibility; I was just hoping it wouldn't happen."

Right: Rightly So in the post parade. Her jockey Cornelio Velasquez said, "My filly broke well and went right to the lead and she finished well too. I had a lot of horse at the quarter pole, so she really ran a big one. Speed has been holding up well today, and I was fortunate to have a good break and make the lead." 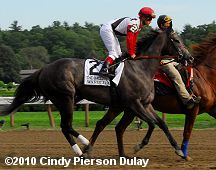 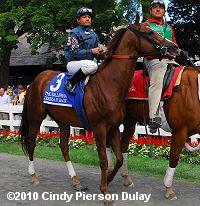 Left: Second place finisher Warbling heads in the post parade. Her trainer Eddie Kenneally said, "I was very happy with her race. I thought she ran an incredible race. She broke sharp, came out well and tried to stay with Rightly So, but Rightly So was outstanding today." Jockey Javier Castellano added, "She broke well from the gate with the winner. She gave me a good run. Second best today, but I'm really proud of the way she held on with those fractions."

Right: Third place finisher Jessica is Back in the paddock before the race. The 9-2 third choice stalked the pace in third early under jockey Elvis Trujillo, but was unable to improve position late finishing third beaten 4 1/4 lengths. The Martin Wolfson trainee improved her record to 12 wins, 13 seconds, and 4 thirds in 45 starts, earning $796,765 for owner Farnsworth Stables. 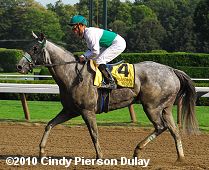 Beaten favorite and sixth place finisher Informed Decision returns after the race. Her trainer Jonathan Sheppard said, "She has not run well on the turn, on the dirt, for some reason, even though she normally finishes well. I think she'd have finished better today, had she not had to be taken up. But she wasn't going to win it." Jockey Julien Leparoux added, "We got a good position on the backstretch, but she doesn't seem to handle the turn. She finished up really well, but she gave up too much to be able to win these kind of races. She's done that on the dirt (before)." 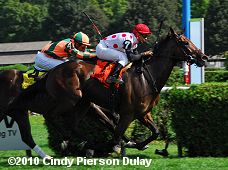 Jockey Rajiv Maragh sent 14-1 Silver Reunion to the front first time past the stands and she was allowed an uncontested lead of as many as 2 lengths through fractions of 23.44, 47.54, and 1:11.15 over the firm course while being stalked by 8-1 Dynaslew the whole way. Silver Reunion stubbornly held onto the lead to the 1/8 pole but Dynaslew rallied late to pass her in the final strides, getting the 1/2 length victory in 1:40.58. It was a length back to late-running Miss Keller third, while favorite Phola was 8th.
Results chart 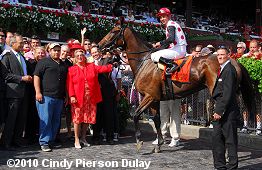 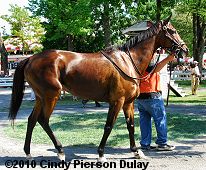 Left: Dynaslew in the winner's circle. Her trainer Seth Benzel said, "I was real happy with our position. Eibar has ridden this filly to a 'T.' Dynaslew is a versatile filly that doesn't need to have the lead. On paper, (Silver Reunion) wanted the lead. Eibar felt our filly had that option, but she didn't need it to win. It's a perfect union between the two. Dynaslew isn't easy to ride - she's temperamental and you see that in the paddock and post parade." 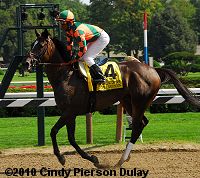 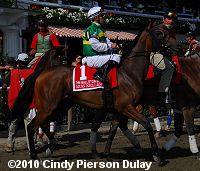 Left: Second place finisher Silver Reunion returns after the race. Her trainer H. Graham Motion said, "I'm just disappointed that she acted up in the gate. It cost her the race. For a filly coming off that kind of layoff to act up like that takes so much out of them. She behaved perfectly up until then. That's how she is. She's a live wire. That's how she runs. She ran a huge race. Obviously, I'm thrilled that she ran so well. I'm not surprised because I knew she was that good."

Right: Third place finisher Miss Keller heads out to the track before the race. The 3-1 second choice raced in 7th early under jockey Javier Castellano, came out 4 wide into the stretch and closed well to get third beaten 1 1/2 lengths. The Roger Attfield trainee improved her record to 4 wins, 2 seconds, and 2 thirds in 15 starts, earning $260,458 for owner Three Chimneys Racing. 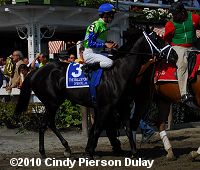 Beaten favorite and 8th place finisher Phola heads out for the post parade. Her jockey Ramon Dominguez said, "I had a good trip but she had nothing in the end. I just needed a good kick in the last part. She was comfortable and started to make up ground, but it wasn't enough for what we needed. I could tell at the top of the stretch that there just wasn't enough left." 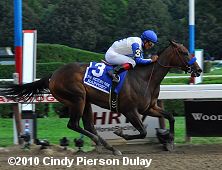 The $100,000 Victory Ride Stakes (G3) featured a field of 7 three-year-old fillies sprinting 6 furlongs on the main track. Katy Now was sent off as the 2-1 favorite off a fourth place finish in the Mother Goose (G1), over 5-2 second choice Rapport, fourth in the Azalea (G3) last out, and 3-1 third choice Beyondallboundarys, winner of two in a row including the Dearly Precious at Monmouth.

Jockey Martin Garcia sent Rapport to the lead down the backstretch and she set a quick pace of 22.05 and 44.54 with Beyondallboundarys stalking her in second. Entering the stretch, Garcia asked Rapport for run and got it, as she drew off through the lane to win by 3 1/2 lengths over 22-1 My Jen in 1:09.66 over the fast track. It was another 1 3/4 lengths back to Beyondallboundarys third, while favorite Katy Now finished fourth.
Results chart 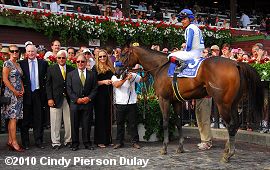 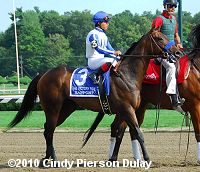 Left: Rapport in the winner's circle. Her trainer Bob Baffert said, "She was training really well and she's really fast. When I saw the 22 first quarter I knew that was easy for her because she is just really fast. She ran so well at Hollywood Park, which is probably the closest synthetic to dirt that we have, that I wasn't worried about the conventional dirt today. In her previous race she just went way too fast on a heavy track. But she was training well here and worked very nicely in the mud actually. It was really nice to get a graded stakes win on Travers Day. Just winning on a big day like this you feel like you won a Grade 1. And I gave her out to a lot of the fans earlier, so that was good."

Right: Rapport in the post parade. Her jockey Martin Garcia said, "The point was to make her relax because she has a lot of speed. She looked like the only speed in the race. She just kept going. With a good horse it doesn't matter where they run and she just showed it. She won two times over the poly in California, and then, now, that's the second time that she ran on the dirt and she won. If she can get over the track she can win because she is a really good filly." 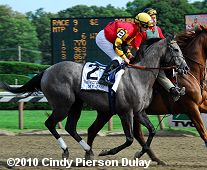 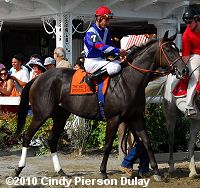 Left: Second place finisher My Jen in the post parade. Her trainer Eddie Kenneally said, "She ran really well. She got a little tired in the lane. She hadn't run since January. Bringing her back in a Grade 3 race was pretty ambitious, but I'm very proud of her performance." Jockey Julien Leparoux added, "I got a good race. She relaxed very well for me. She even finished well, but we just got beaten by a better filly today, that's all. But everybody's happy with the way she ran."

Right: Third place finisher Beyondallboundarys heads out on the track before the race. The 3-1 second choice pressed the pace early under jockey Calvin Borel, and was unable to improve position late to finish second beaten 3 1/2 lengths. The Tom Amoss trainee improved her record to 3 wins, 1 second, and 1 third in 6 starts, earning $122,160 for owner Ronnie Lamarque.