The feature race on the Sunday after the Travers Stakes was the $300,000 Personal Ensign Stakes (G1), which often features the best older fillies and mares on the east coast going the Travers distance of 1 1/4 miles on the Saratoga main track. Only 5 went to post, but the eyes of the racing world were on 2009 Horse of the Year Rachel Alexandra, sent off as the 2-5 favorite in her first attempt at the distance. She comes to the "Graveyard of Champions" off two straight wins in the Fleur de Lis (G2) at Churchill Downs and the Lady's Secret at Monmouth, after losing her first two starts of 2010. In to challenge her included 9-5 second choice Life at Ten, winner of 6 straight including the Ogden Phipps (G1) and Delaware Handicap (G2), and 9-1 third choice Miss Singhsix, runner-up in the Delaware Handicap after winning the Obeah Stakes (G3). 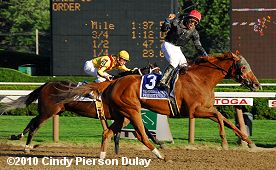 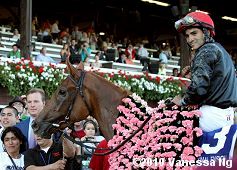 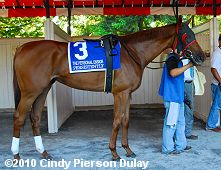 Left: Persistently in the winner's circle. Her trainer Shug McGaughey, who also trained Personal Ensign, said, "Obviously with a filly like Rachel Alexandra in the race, we knew we were a long shot. But we did think she'd run 1 1/4 miles. It was Mr. Phipps' decision. He said to me, 'If it's going to be a short field; I'd like to give it a try.' The only time she had ever run two turns on the dirt was when she won here earlier in the meet. It's one of those things that pays off. Sometimes it does, sometimes it doesn't. But today it did. I felt like something was going to be going on up front, and I just wanted (Garcia) to let the race unfold as it did and just kind of be there if she had a chance. I thought that (Rachel Alexandra) might be a little vulnerable going 1 1/4, and I knew we'd run 1 1/4. Her female family runs a long way. We're just tickled to death to win the race, particularly with it being the Personal Ensign. My hat's off to Rachel Alexandra. She runs her heart out every time. She made a beautiful presence in the paddock today. We were just lucky enough to pick up the pieces."

Right: Persistently in the paddock before the race. 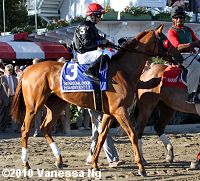 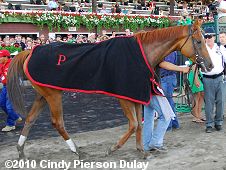 Left: Persistently heads out to the track before the race. Her jockey Alan Garcia said, "Early on I was talking to (Jose Valdivia Jr. on Miss Singhsix), and I said, 'We are good, we are good. Be patient and if those two fillies give it up at the 1/4 pole, we both have a good shot.' My filly was running at the end. I asked her for everything she had, and she gave it to me. This was a big victory in my career. I can't even begin to explain the emotions, to beat the Horse of the Year, at Saratoga, it was amazing."

Right: Persistently returns to the barn after the race. 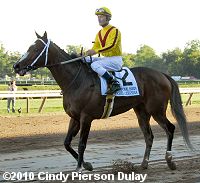 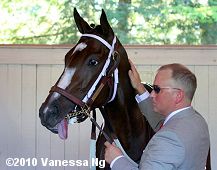 Second place finisher and beaten favorite Rachel Alexandra returns after the race. Her trainer Steve Asmussen said, "The winner won the race and I don't want to take anything away from that. In a 5-horse field, you can't complain about where you are. It is what it is. I thought (Rachel) put a very good mare (Life at Ten) away. It obviously took more out of her on the front end than we would have hoped for. When she moved away from (Life at Ten) that's what you were hoping to see. Then she got run down late. Her (next race) will be up to Mr. Jackson and I will speak with him. We want to evaluate who we are and who she is and where she's at. We're just worried about her well-being."

Right: Rachel Alexandra in the paddock before the race. Her owner Jess Jackson said, "We are disappointed in the result, as we are sure her countless fans are, but we are certainly not disappointed in her. She is still a superstar in our hearts and minds. The old sports adage applies: on any given Sunday, anything can happen." 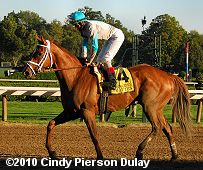 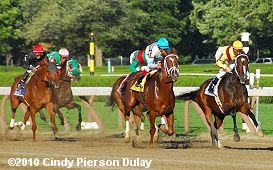 Left: Third place finisher Life at Ten returns after the race. Her jockey John Velazquez said, "That was a speed duel. I thought my filly would be on the lead, (Borel) would rate in second, but he sent her out and got in the lead and all that did was create more problems for my horse because now she was engaged. But I wasn't going to take her back; I just left her alone. I wasn't going to go back either, so I just held my position and left it alone. The 1/2 mile pole came and I thought she was dead and then the 3/8 pole came and she was done. Nothing left."

Right: The field shortly after the start of the 2010 Personal Ensign Stakes (G1) with Rachel Alexandra and Life at Ten out front and eventual winner Persistently at the back. Jockey Calvin Borel aboard Rachel Alexandra said, "After we put away Life at Ten at the 1/4 pole, I didn't feel any acceleration and I got worried. She wasn't really there. I knew if anyone was running behind us, we were in trouble. She just got outrun. I had everything my way, and she just got outrun. If you can't take the losing with the winning, you can't be in the game."