The $350,000 Beldame Stakes (G1) is the major New York prep for the Breeders' Cup Ladies' Classic (formerly the Distaff) contested at 1 1/8 miles around one turn of Belmont Park's main track. With the retirement of 2009 Horse of the Year Rachel Alexandra earlier in the week, just 5 older fillies and mares went to post on Saturday, with Unrivaled Belle sent off as the 5-4 favorite off two straight second-place finishes, in the Ogden Phipps (G1) and the Ruffian (G1) handicaps. In to challenge her included 7-5 second choice Life at Ten, winner of the Ogden Phipps (G1) and Delaware Handicap (G2) before finishing third in the Personal Ensign (G1) last out, and 3-1 third choice Persistently, who defeated Rachel Alexandra in the Personal Ensign (G1).

Jockey Pablo Fragoso sent 17-1 fourth choice Queen Martha to the lead exiting the chute and she set easy fractions of 23.68, 47.80, and 1:12.39 while being pressed to her outside by Unrivaled Belle. Entering the stretch, Queen Martha tired and faded from contention, as Life at Ten, 3rd early, passed the tiring pacesetters at the 3/16 pole, opening up a 1 1/2 length lead on Unrivaled Belle at the 1/8 pole through a mile in 1:36.38. Life at Ten cruised to a 2 length win in 1:49.29 over the fast track. It was a long 6 3/4 lengths back from Unrivaled Belle to late-running Persistently third. 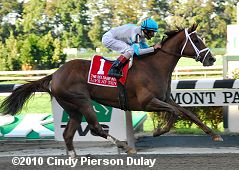 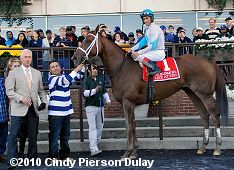 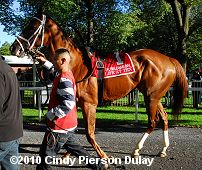 Left: Life at Ten in the winner's circle with trainer Todd Pletcher on the far left. Pletcher said, "She ran okay at Saratoga a couple of times, but I don't think that is her favorite surface. We made a tactical decision in her last race and it kind of backfired. So this time we had a better plan in letting her fall into a rhythm and hoped that the other two fillies would show some initiative and it worked out well. Hopefully we will be heading to Louisville if everything goes well."

Right: Life at Ten in the paddock before the race. 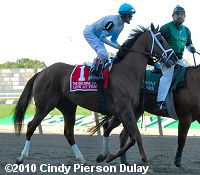 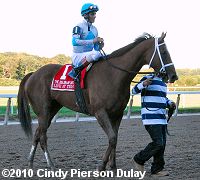 Left: Life at Ten in the post parade. Her jockey John Velazquez said, "She broke well and got us in a good position. When (Queen Martha and Unrivaled Belle) went, she settled really well behind those two. When we passed the 1/2 mile pole I put her in the clear and let her get to that cruising speed that she has. She started going at a good, comfortable speed and she was going well, and I was just hoping that when I asked her, she'd respond and she responded all the way."

Right: Life at Ten returns after the race. 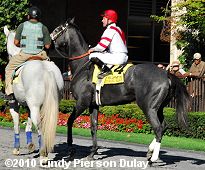 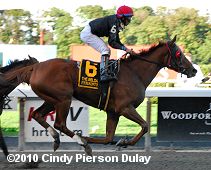 Left: Second place finisher and beaten favorite Unrivaled Belle heads out of the paddock. She left before the other horses and skipped the post parade. Her trainer Bill Mott said, "She had a great trip. The pace set-up worked out perfectly. We had first run on Life At Ten, but we couldn't outrun her at the wire. Our mare tried." Jockey Kent Desormeaux added, "On paper, I don't think it could have set up better, except (Life At Ten) went faster. She ran hard. No excuses."

Right: Third place finisher Persistently after crossing the finish. Her trainer Shug McGaughey said, "It didn't quite set up the way I thought, and when they took Life At Ten back the way they did, I thought we might be in a bit of trouble. If Rachel Alexandra had been here it might have been a little bit different, because they would have been able to turn her lose. I'm disappointed we didn't do better, but Alan felt like she tried hard and I'm not discouraged about going on with her. I think going two turns is much better for her, so we'll see how she comes out of it go on from there."