The first of three Grade 1 stakes races Saturday on Arlington Million day was the $400,000 Secretariat Stakes (G1) for 3-year-olds going the Million distance of 1 1/4 miles on the turf. Just 6 went to post on Saturday, with Paddy O'Prado sent off as the 1-2 favorite off two straight wins over the Colonial Downs turf, in the Colonial Turf Cup (G2) and the Virginia Derby (G2). In to challenge him included 3-1 second choice Wigmore Hall, in from England where he won the John Smiths Cup at York and then the Newmarket Nights Conditions Stakes at Newmarket, and 4-1 third choice and locally based Workin for Hops, winner of the American Derby (G2) at Arlington after finishing second in the Colonial Turf Cup.

Jockey Julio Felix sent 50-1 longest shot Cherokee Lord to the lead first time past the stands and he set slow fractions of 25.80, 51.78, and 1:16.94 while being stalked by Workin for Hops second. Kent Desormeaux kept favorite Paddy O'Prado in third 3 lengths off the pace. Entering the stretch, Cherokee Lord and Workin for Hops continued to battle for the lead to the 1/8 pole, through a mile in 1:41.52, but Paddy O'Prado, out three wide for room, accelerated in the stretch and easily passed the pacesetters at the 1/16 pole to win by 1 1/4 lengths over late-running Wigmore Hall in 2:04.71 over good turf. It was another 3/4 lengths back to Workin for Hops third. 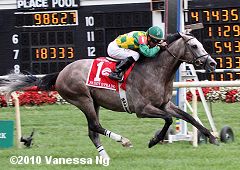 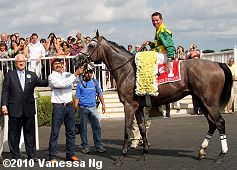 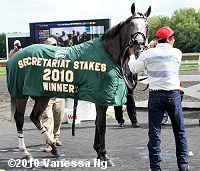 Left: Paddy O'Prado in the winner's circle with owner Jerry Crawford of Donegal Racing on the far left.

Right: Paddy O'Prado in his winner's blanket. His trainer Dale Romans said, "They were going so slow up front. He can do that. Actually he broke his maiden on the lead. When they all got together at the quarter-pole, I knew no one was going to out gun him the rest of the way." 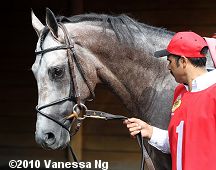 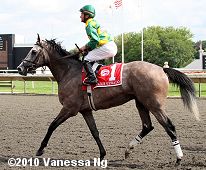 Left: Paddy O'Prado in the paddock before the race. His jockey Kent Desormeaux said, "We went slow. He's a natural striding horse and I had to drag him off the lead which was my biggest concern. It worked out good. The turf is a bit soft but we were going slow. I think he's by far the best 3-year-old and I don't just mean on turf. I think I should have won the Kentucky Derby but I got shut off at the 1/4 pole." 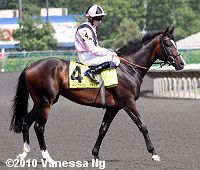 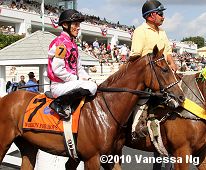 Left: Second place finisher Wigmore Hall in the post parade. His jockey Jamie Spencer said, "The pace wasn't great. The horse had to be there too early. No excuses the best horse won. I had plenty of time to get him though the straight. He needs a stringer pace but you can't have everything."

Right: Third place finisher Workin for Hops heads out to the track before the race. His jockey Francisco Torres said, "We didn't want to be too close. He showed up, I can't ask for more. They've met before. The winner beat him by 3 lengths in Virginia and only 2 here so we're gaining on him."

On to the Arlington Million won by Debussy
On to the Beverly D. won by Eclair de Lune