Of the three Triple Crown races, the undercard of the Belmont Stakes has the most prestigious races on its undercard. This year, the 45,243 on hand were treated to 5 graded stakes which preceded the main event including three Grade 1 events.

Immediately before the Belmont Stakes, a field of 11 older horses contested the $400,000 Manhattan Handicap (G1), a 1 1/4 mile trip over the inner turf course. Last year's winner and champion turf horse Gio Ponti was sent off as the even-money favorite off his 4th place finish in the Dubai World Cup. In to challenge him included 5-1 second choice Just as Well, second in the Dixie at Pimlico last out, and 6-1 third choice Court Vision, second in three straight starts including the Maker's Mark at Keeneland and the Woodford Reserve Turf Classic at Churchill.

Jockey Martin Garcia sent 29-1 shot Jet Propulsion to the front first time past the stands and he was allowed an uncontested lead of 1 1/2 lengths through easy fractions of 23.95, 48.94, 1:12.98, and 1:36.46 over the firm going, with 38-1 longest shot Interpatation stalking him in second. Entering the stretch, Jet Propulsion tired badly and dropped to last, as 7-1 Take the Points opened up a 1 1/2 lead in midstretch. Gio Ponti, who was 8th most of the way, made a run to challenge inside the 1/8 pole, but 21-1 Winchester, 10th early, came out 6 wide and outfinished the favorite late to win by 1/2 a length in 1:59.46. It was another length back from Gio Ponti to 33-1 Expansion third. 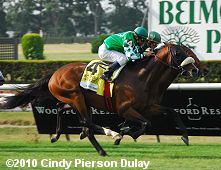 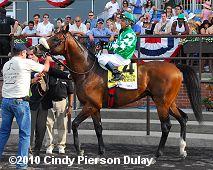 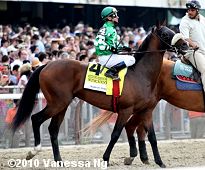 Left: Winchester in the winner's circle. His trainer Christophe Clement, who also trains Gio Ponti, said, "He ran a great race, and I am delighted. Gio Ponti was pinned inside. I'm very happy with the two horses. The two horses worked remarkably together last Sunday. Winchester comes from far out of it; I thought softer ground would serve him well, but for some reason horses are coming from out of it today."

Right: Winchester warms up before the race. His jockey Cornelio Velasquez said, "He had a good, stable position. I saw there was traffic on the inside, so I decided to go outside. He probably had the best trip in the race." 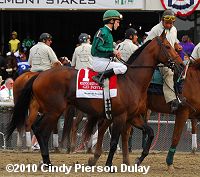 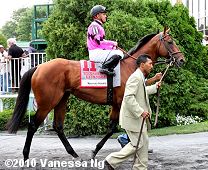 Left: Second place finisher and beaten favorite Gio Ponti in the post parade. His jockey Ramon Dominguez said, "I don't know what happened to Interpatation at the 3/8 pole, but he got squeezed and we had to check sharply since we were right behind him. I had to take a hold of him and drift out, then get back inside. I'm not going to make any excuses. He ran well and he ran hard. The winner had a jump on us at the end."

Right: Third place finisher Expansion heads out of the paddock before the race. His trainer Chad Brown said, "We kept him in the clear today, we lost some ground and that was the plan. Last time out we got trapped in the Elkhorn, but I knew he was sitting on a big race. We knew this race was deep water. He's just too good. At the 1/8 pole, I thought I had a chance to win and I figured if he got clear, he might have had a chance to steal it. Those are two really nice horses that finished ahead of him." Jockey Javier Castellano added, "I thought he ran well. He was coming on at the end. He ran a big race behind the winner and defending champion."


The $400,000 Just a Game Stakes (G1) is the first Grade 1 race on Belmont Stakes day. A field of 6 older fillies and mares went 1 mile on the Widener turf course, with Proviso sent off as the 11-10 favorite off her win in the Frank Kilroe Mile at Santa Anita. In to challenge her included 5-2 second choice Phola, winner of three straight including the Distaff Turf Mile at Churchill last out, and the 4-1 third choice consisting of the two-horse Farnsworth Stables entry of Hollywood Wildcat winner Cherokee Queen and Orchid winner Speak Easy Gal.

Speak Easy Gal opened a 1 1/2 length lead on the backstretch through fractions of 24.54 and 48.21 with favorite Proviso stalking her in second. Speak Easy Gal continued to lead into the stretch through 3/4 in 1:11.36. Proviso moved up to challenge, passing the tiring pacesetter at the 1/8 pole and was all-out to hold off late-running Phola by 1/2 a length to get the win in 1:34.09. It was just a neck back to 9-1 My Princess Jess third. 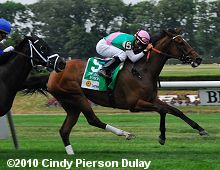 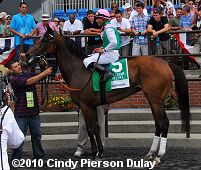 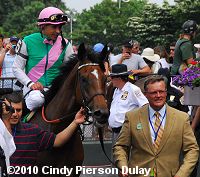 Left: Proviso takes her walk down Victory Lane. Her jockey Mike Smith said, "She ran great. She's probably better when she's running at a target. The race came up light on the speed part. Bill told me not to change anything; that we were going to be laying second, and to go from there. It all worked out. She certainly is getting a lot better. She has turned it around with her disposition and the way she is running. She has become more relaxed in the gate and in the race."

Right: Proviso in the winner's circle. Her trainer Bill Mott said, "She's been a nice filly, but come to hand for us lately. We've got a couple Grade 1's coming up; we're hoping for more. Looking at the form, I thought the race might shape up as it did, laying second, and that's what happened. I thought she might accelerate quicker than she did, but they were cruising right along. Phola ran to her, and it was hard to know how much she had left. I'd probably want to try the Diana with her. She has run longer races. She won the Spinster at 1 1/8 but got DQ'd."

The $300,000 Acorn Stakes (G1) featured a field of 12 three-year-old fillies going 1 mile around 1 turn of the main track. Davona Dale winner Amen Hallulujah was sent off as the 5-2 favorite off a 6th place finish in the Kentucky Oaks. In to challenge her included 5-1 second choice Tanda, winner of the Railbird at Hollywood last out, and 6-1 third choice Much Rejoicing, undefeated in two starts and making her stakes debut.

Champagne d'Oro, the second longest shot on the board at 39-1, was sent to the lead down the backstretch by jockey Martin Garcia and she set quick fractions of 23.61 and 46.86 over the fast track with 9-1 Buckleupbuttercup stalking her in second. Entering the stretch, Amen Hallelujah, who was 7th early, came out 5 wide for run and quickly closed on the leader. However, Champagne d'Oro had something left, holding off the favorite in the final furlong to win by 1/2 a length in 1:37.44. It was another length back to late-running Tanda third.

Winning owner-breeder Arnold Zatcher said, "She's not real big but she puts everything into it. Bob (Baffert, trainer) calls her a little keg of dynamite. This is a good distance for her. When we bred her, at the time, we thought Medaglia d'Oro had good potential, and the dam, Gabriellina Giof, was our first winner; she won the 2002 Manhattan Beach Handicap for us. We wanted to get past that last race (6th in the Kentucky Oaks). We haven't thought about what's next, we really want to enjoy this one." 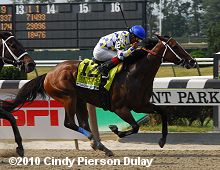 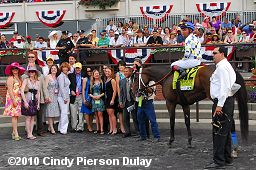 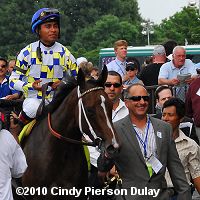 Left: Champagne d'Oro in the winner's circle. Her jockey Martin Garcia said, "Today, I let her break on her own. I let her have the lead and just keep her together and comfortable. I know she can run. Today, this dirt helped her a lot. She loved the ground."

Right: Champagne d'Oro takes her walk down Victory Lane. Richard Baltas, assistant to trainer Eric Guillot said, "She runs better up front. When she ran second in the Fair Grounds Oaks, coming out of the six-furlong maiden race, she wasn't quite fit enough and she still dug in. Today, everything was right. I told Martin, 'if she breaks well, let her place herself.' If she got loose on the lead, they might not go after her and they didn't. She got an easy pace and had something left. She is going to Saratoga. Eric is going to take 15-20 horses to Saratoga, and she will be one of them." 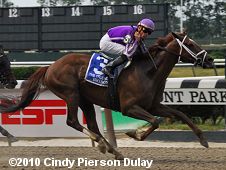 The $250,000 True North Handicap (G2) featured a field of 8 older horses sprinting 6 furlongs on the main track. Checklist was sent off as the 5-2 favorite off his 11 length allowance win last out, over 3-1 second choice Bribon, fifth in the Westchester at Belmont after finishing second in the Barbados Gold Cup, and 5-1 third choice Snapshot, fifth in the Maryland Turf Sprint in his last start.

Checklist battled for the lead with 8-1 Formidable down the backstretch through fractions of 22.29 and 45.60, with Snapshot stalking them in third. Entering the stretch, Checklist continued to lead but Bribon, who was last early, came out 5 wide for the drive and closed well late to win by 1 1/2 lengths over Snapshot in 1:09.63 over the fast main track. It was a long 4 1/4 lengths back to the tiring favorite Checklist third.
Full results chart 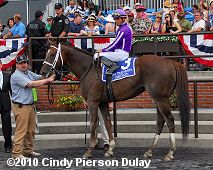 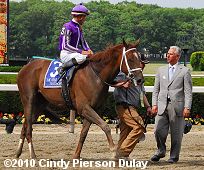 Left: Bribon heads to the winner's circle as trainer Todd Pletcher looks on. Pletcher said, “I thought with Quality Road going to the Met Mile, it could open a lot of options for Bribon. He had won at 6 and 7 (years old) and he’s just a very versatile horse.I thought Checklist ran huge. I think the track may not be real speed-favoring."

Right: Bribon in the winner's circle. His jockey Garrett Gomez said, “There were quite a few horses with speed and I just needed to find a place for him to settle into a simple rhythm and then quicken when I asked him. The only concern was that he’d never run shorter than a mile. He picked them up with ease and came home with ease – just the way you'd like.” 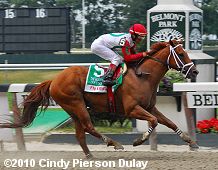 Kicking off the stakes action on Belmont day was the $250,000 Woody Stephens Stakes (G2) for three-year-olds sprinting 7 furlongs on the main track. D'Funnybone was sent off as the 6-5 favorite in the field of 5, winner of the Hutcheson and Swale at Gulfstream before finishing fourth in the Withers last out. Also in the field included 2-1 second choice Eightyfiveinafifty, 4th in the Derby Trial after winning the Bay Shore, and 7-2 third choice Discreetly Mine, cutting back in distance after finishing 13th in the Kentucky Derby.

Eightyfiveinafifty and Discreetly Mine battled for the early lead down the backstretch through fractions of 22.28 and 44.82 over the fast track, while D'Funnybone sat third. Entering the stretch, Eightyfiveinafifty tired and faded to last, as D'Funnybone came out four wide to take the lead. He drew off through the stretch to win by 3 1/4 lengths over Discreetly Mine in 1:22.64. It was just 1/2 a length back to 9-1 Remand third.
Full results chart 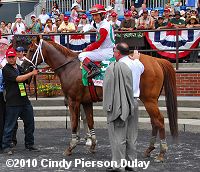 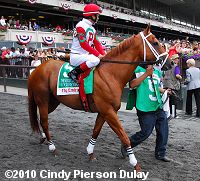 Left: D'Funnybone in the winner's circle. His trainer Richard Dutrow Jr. (seen in the foreground) said, "We know he likes this track and things set up absolutely perfect for him. He did what he was supposed to. When I saw those two going with each other, I couldn't ask for anything better. Even though he was further back than usual, Edgar knew what he was doing and he knew he had plenty of time to catch up. The (King's Bishop at Saratoga) is next without a doubt. He loves it up there and it's a Grade 1 and we need to get the job done."

Right: D'Funnybone heads out to the track for the post parade. His jockey Edgar Prado said, "I expected to be a little closer, but he broke well and I just bided my time. I liked where I was sitting. It worked out perfectly."