The $1 million Belmont Stakes (G1) is the final leg of American racing's Triple Crown and the highlight of the New York racing season, contested at the marathon distance of 1 1/2 miles, one complete trip around the main track at Belmont Park. A field of 12 three-year-olds went to post in the 142nd "Test of the Champion" before the relatively small crowd of just 45,243 fans on a sunny Saturday afternoon with temperatures near 90.

As expected, Florida Derby winner Ice Box was sent off as the 9-5 favorite off his fast-closing second place finish in the Kentucky Derby in a troubled trip last out. In to challenge the Nick Zito stable star included 5-1 second choice and stablemate Fly Down, winner of the Dwyer at Belmont Park by 6 lengths in his last start, and 6-1 third choice First Dude, a close second to Lookin at Lucky after setting the pace in the Preakness last out for trainer Dale Romans.

Jockey Ramon Dominguez sent First Dude down to the rail and to the front soon after the start, and he set easy fractions of 24.15, 49.19, 1:14.94, and 1:40.25 over the fast main track. 20-1 Interactif sat a length and a half back in second for the long backstretch run, while favorite Ice Box was unhurried in 8th some 9 lengths off the pace early. First Dude continued to lead on the far turn and into the stretch, getting 1 1/4 miles in 2:04.97. Interactif tired and dropped out of contention as 17-1 Game On Dude, who was 3rd early, moved up to challenge. 13-1 Drosselmeyer, who was 5th early, came out five wide for run and rallied well, passing the pacesetter inside the 1/16 pole to win by 3/4 length in 2:31.57. Fly Down closed from 6th to nose out pacesetter First Dude for second money. Favorite Ice Box gained ground on the far turn on the inside, but when switched outside for his rally at the 1/4 pole, lacked further response when asked by Jose Lezcano, finishing 9th beaten 11 1/4 lengths. 11-1 Uptowncharlybrown finished 5th just 3 lengths back, but was disqualified to last by the stewards for losing the 8 pound lead pad at the 7/8 pole and coming back underweight. 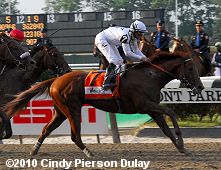 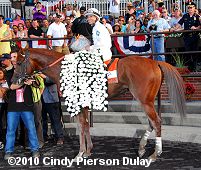 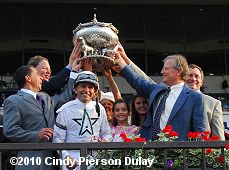 Left: Drosselmeyer in the winner's circle. His trainer Bill Mott, celebrating his first Triple Crown race win, said, "I thought he was in a good position. I knew they were going slow, but he was in range. People don't know it, but this is the second Belmont winner I've saddled. I saddled Victory Gallop (in the 1998 Belmont) for Elliot (Walden, vice president and racing manager of WinStar Farm) when he had a broken leg. It was actually Elliott's idea to go to the Dwyer. We thought about wheeling back into either the Arkansas Derby or Blue Grass, but we just said we should stick with our original plan. I got a little nervous when he ran in the Dwyer and looked like he needed some racing, but it turned out to be a good plan." 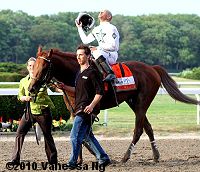 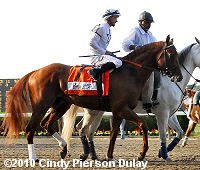 Left: Jockey Mike Smith celebrates aboard Drosselmeyer after winning the Belmont. Smith said, "It was a great trip. It was all about getting into the rhythm and we did it. He broke good today, which I was concerned about. I was able to follow (Ice Box) right over and once he cleared me, I was able to get him back out and get into that rhythm we've been talking about. Billie said, give him a nice comfortable rhythm. That's what he did. He stayed in that cool rhythm all the way. The 3/8 brawl started. Pick him up soon as I asked him, he kicked in. I was worried about it. Not only did he kick, he kept on going, on going, on going. It was a great race today. It was incredible. It's great to come home (after winning two Grade 1 races today for trainer Bill Mott)." 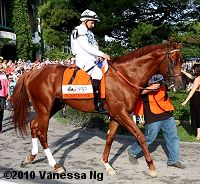 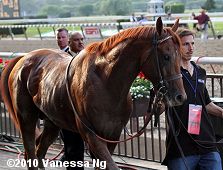 Left: Drosselmeyer in the paddock before the race. Elliott Walden, vice president of WinStar Farm said, "We've been given great opportunities at WinStar with the resources with the Troutts and the Casners put into the business, and so, you know, it's just nice to see your hard work come together and it's been such a team feeling all spring, you know, you go into a barn, a yearling barn, you go into the stallion barn, you know, our stallion manager, Larry McGuinness is walking on clouds right now with his Distorted Humor, being the daddy of this one. We have a great team in place, starts at the top with the Troutts and the Casners, and it's just a real blessing."

Right: Drosselmeyer heads back to the barn after the race. 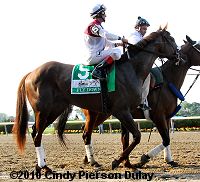 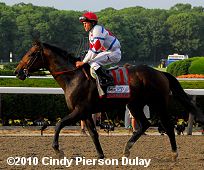 Left: Second place finisher Fly Down in the post parade. His jockey John Velazquez said, "He gave me something extra. As soon as we got past a mile, he started picking it up. Mike rode a really good race. He kept me there when I tried to ride my horse in between horses, he was a little intimidated. When Mike passed us and I pulled to the outside, that's when he started running."

Right: Third place finisher First Dude returns after the race. His trainer Dale Romans said, "We had a perfect trip and everything went like we planned, we just couldn't hold it together right there at the end. He ran 1 1/2, he ran hard, he did all the work again on the lead. I'm real happy with him. He put in a great effort. No excuses. He wants to run all day. He's still learning, he's still getting it together and he's still improving. I think we have a lot of fun races in front of us. He'll fly back to Kentucky on Monday, take a little break and figure out what to do with him." His jockey Ramon Dominguez added, "I had a perfect trip. In the stretch, he was getting out, just a little tired. I was very proud of him. I couldn't ask for anything more." 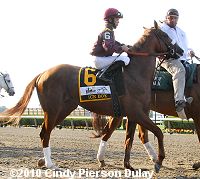 Left: Beaten favorite Ice Box in the post parade. His jockey Jose Lezcano said, "It was a little hot for him today, and the pace was slow. We were in a good position throughout the race. When I asked him to run, he showed no interest. He didn't have it today, he didn't fire." Trainer Nick Zito added, "Obviously I'm disappointed about Ice Box. He didn't deal with the heat well today. The Pulpit came out in him a little bit today. We'll have to regroup and see what happens."

Right: The horses break from the gate for the 142nd Belmont Stakes. Stay Put (10) broke in the air and finished 6th beaten 6 3/4 lengths. His jockey Jamie Theriot said, "This was a different surface than he's been running on. It's really deep. He ran really well. He's a nice horse and there are some great spots for him down the road."