The feature race on the Friday before Belmont Stakes day is the $200,000 Brooklyn Handicap (G2) for older horses going the Belmont Stakes trip of 1 1/2 miles, one complete lap of the main track at Belmont Park. A field of 8 went to post under sunny skies before 4,432 fans, with American Dance sent off as the 5-2 favorite off a runner-up finish in an allowance, despite being winless for over a year. In to challenge him included 3-1 second choice Gangbuster, winner of an allowance on turf last out, and 7-2 third choice and last year's winner Eldaafer, exiting an allowance win after finishing 7th in the Skip Away at Gulfstream.

18-1 outsider Gabriel's Hill sprinted clear on the rail under jockey Eibar Coa and he set easy fractions of 24.59, 49.43, 1:15.02, 1:39.22, and 2:03.99 with Eldaafer stalking the pace in second a length behind. Entering the stretch, Gabriel's Hill stubbornly held the lead while 9-1 Alcomo, who was as far back as 7th early, closed five wide to challenge. Alcomo closed with a rush down the center of the track to nail Gabriel's Hill in a photo finish, getting the victory in 2:30.07 over the fast track. It was another 2 lengths back to Eldaafer third, while favorite American Dance was eased late and finished last. 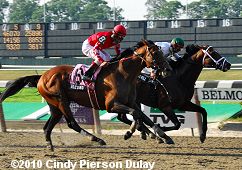 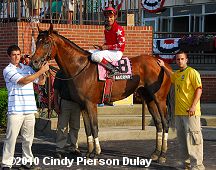 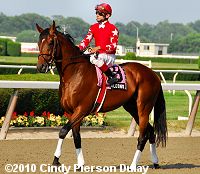 Left: Alcomo in the winner's circle. Caue Caramori, assistant to trainer Eduardo Caramori said, "We know the horse hates synthetics, but the owners live (in Dubai). Luckily, he came back even better than he left. This is a nice horse - a real pleasure to train. The Breeders' Cup is at Churchill Downs this year, and that's our main goal."

Left: Alcomo in the post parade. His jockey Cornelio Velasquez said, "I broke well and stayed in a good position. I was in the clear at the quarter pole, and I had a lot of horse. I thought I had the race easy, but the two, he ran a good race. I knew I was in front at the wire." 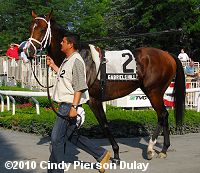 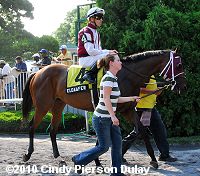 Left: Second place finisher Gabriel's Hill in the paddock before the race. His trainer Seth Benzel said, "We believed this would be the type of race, at 1 1/2 miles, that would suit him. He ran his eyeballs out and came up just short. At least, we'll enjoy a big effort." His jockey Eibar Coa said, "My horse ran well. I'm happy for him."

Right: Third place finisher and last year's winner of the Brooklyn, Eldaafer, heads out of the paddock before the race. The 7-2 second choice stalked the pace four wide early under new jockey Jose Valdivia Jr., challenged for the lead in mid-stretch but tired late to finish third beaten 2 lengths at the line. The Diane Alvarado trainee improved his record to 6 wins, 0 seconds, and 5 thirds in 20 starts, earning $341,942 for owner Alghuwayriyah Stable LLC. 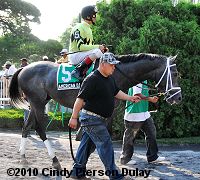 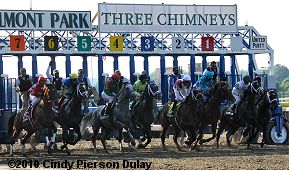 Left: Last place finisher and beaten favorite American Dance heads out of the paddock before the race. The 5-2 favorite pressed the pace 2 wide for the first mile under jockey John Velazquez, dropped back badly at the 1/4 pole and was eased, finishing last beaten 28 lengths. The Todd Pletcher trainee has a record of 2 wins, 3 seconds, and 1 third in 11 starts, earning $117,895 for owner-breeder Edward P. Evans.

Right: The horses break from the gate for the 122nd running of the Brooklyn Handicap.


The undercard feature on Friday was the $100,000 Hill Prince Stakes (G3) for 3-year-olds going 1 mile on the Widener turf course. Nordic Truce was sent off as the 3-5 favorite in the field of 5, undefeated in three lifetime starts including the Dania Beach at Gulfstream and the Transylvania at Keeneland. In to challenge him included 2-1 second choice Krypton, ninth in the Lexington last out after winning an allowance, both at Keeneland, and 5-1 third choice Lethal Combination, exiting a fourth place finish in the Lamplighter at Monmouth Park.

Jockey Ramon Dominguez sent Nordic Truce to the front soon after the start and he was allowed an uncontested lead of as many as 2 lengths through slow fractions of 24.94 and 49.77 over the firm course. On the far turn, Krypton, who stalked the pace in second down the backstretch, moved up to gain a short lead at the 1/4 pole through 3/4 in 1:12.52. The pair battled the length of the stretch, bumping twice in the final furlong, but Krypton held on to win by a neck in 1:34.97. It was 3 1/2 lengths back to Lethal Combination third. There was a stewards' inquiry into the stretch run but there was no change to the order of finish. 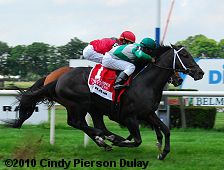 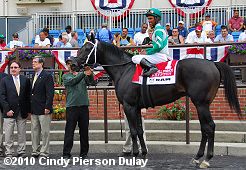 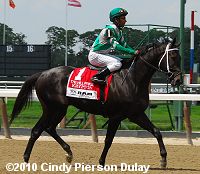 Left: Krypton in the winner's circle with trainer Kiaran McLaughlin at the far left. McLaughlin said, "I thought he'd be better if he was behind a horse or two. Rajiv rode a great race and we had seven pounds, so I think that helped."

Right: Krypton in the post parade. His jockey Rajiv Maragh said, "It was a race lacking a true speed horse, a true leader. (Nordic Truce) showed speed last time when they went 45 and change (Transylvania). I wanted to blow the race open and make it a two-horse race. I made a movie earlier than usual. He was a little tight; the contact was made when (Nordic Truce) came out into me." 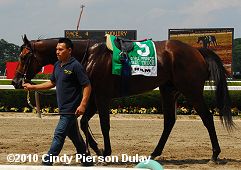 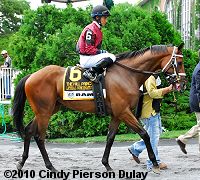 Left: Second place finisher Nordic Truce circles while they decide on the inquiry. The 3-5 favorite set the pace along the rail for the first 3/4 mile under new rider Ramon Dominguez , lost the lead into the stretch, dueled the rest of the way while drifting out, finishing second beaten a neck. The Christophe Clement trainee improved his record to 3 wins and 1 second in 4 starts, earning $151,220 for owner-breeder Ammerland Stud.

Right: Third place finisher Lethal Combination heads out of the paddock before the race. The 5-1 third choice raced in 3rd three lengths off the pace down the backstretch, came out three wide for the drive but could not gain on the leaders, finishing third beaten 3 3/4 lengths at the line. The Kiaran McLaughlin trainee improved his record to 3 wins, 0 seconds, and 2 thirds in 9 starts, earning $68,075 for owner Namcook Stables.