The co-feature on Jim Dandy day was the $500,000 Diana Stakes (G1) for older fillies and mares going 1 1/8 miles on the Mellon Turf Course. Last year's Diana winner Forever Together was sent off as the 9-10 favorite in the field of 10, exiting a second place finish in the Just A Game Stakes at Belmont Park. In to challenge her included 9-2 second choice Rutherienne, winner of the Nassau Stakes at Woodbine last out, and 6-1 third choice My Princess Jess, third in the Just A Game after winning the Beaugay.

26-1 Quiet Meadow was quickest away and set early fractions of 23.60, 48.45, and 1:23.54 while being stalked by 8-1 Criticism down the backstretch. Jockey Julien Leparoux kept favorite Forever Together near the back of the field for the first 3/4 mile. Entering the stretch, the pacesetters both tired and faded from contention. Carribean Sunset, who had stalked them in third the whole way, took a short lead at the 1/8 pole through 1 mile in 1:36.49. However, Forever Together came out wide into the stretch and closed with a rush to nail Carribean Sunset at the line by a head in 1:48.21 over the good turf. It was just 3/4 length back to late-running Rutherienne third. 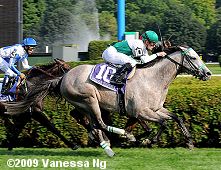 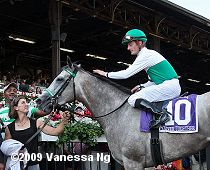 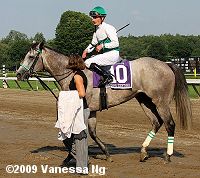 Left: Forever Together in the winner's circle.

Right: Forever Together circles before going to the winner's circle. Her trainer Jonathan Sheppard said, "To keep running that well at that level - it takes a tremendous horse to do that. It's just fantastic. She's a pleasure to train and Julien did a great job. I was a little concerned they were being strung out more than I expected, but Julien did start to ease up in a nice striking position around the turn. She was loafing a little bit and (Carribean Sunset) finished rather gamely. Keeping in mind (Forever Together) hadn't run in a while and giving weight to the other horses, it was an outstanding performance." 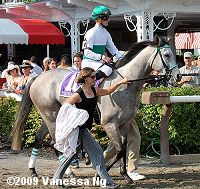 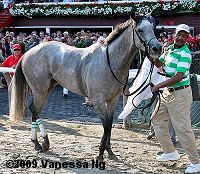 Left: Forever Together in the post parade. Her jockey Julien Leparoux said, "She's an amazing mare. She relaxed good and I had a good trip all the way around. She had the same closing kick she had last year in this race, too. This was a good group of fillies and she beat them again. She's awesome!"

Right: Forever Together heads back to the barn after the race. 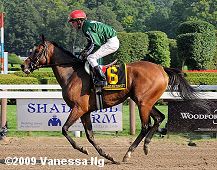 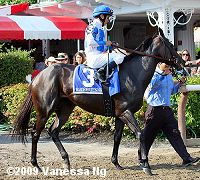 Left: Second place finsher Carribean Sunset returns after the race. Her jockey Ramon Dominguez said, "She ran great and did everything perfect. Forever Together just beat us in the last few strides. When I split horses and finally got cleared, I could see her (Forever Together) in front of me. We were closing down on her. I kept after my filly and she gave me everything she had. I knew it was going to be a tight finish and I was hoping it would go our way. Forever Together proved to be the defending champion."

Right: Third place finisher Rutherienne in the post parade. Her trainer Christophe Clement, who trained both 2nd and 3rd place horses, said, "They both ran very well, both ran a very good race. I wouldn't mind (if winning trainer Jonathan Sheppard decided to go in another place), for once. Maybe tell Sheppard to go somewhere else next time." 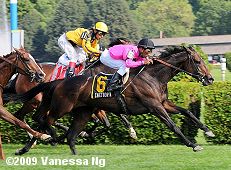 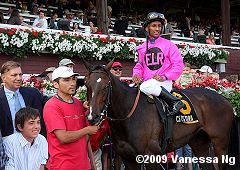 Kicking off the stakes action on Saturday was the $70,000 Lake Luzerne Stakes for New York-bred distaffers going 1 1/16 miles on the inner turf course. 8-1 Cagey Girl was loose on the lead early through fractions of 25.27, 50.37, and 1:15.52 over the good turf, with 7-1 Stormy Relations stalking her in second. Cagey Girl continued to lead to mid-stretch, but 3-1 third choice Chestoria and jockey Rajiv Maragh, who raced in midpack 5th early, closed with a rush to get up for the 1/2 length victory in 1:44.88. It was a neck back from Stormy Relations to both pacesetter Cagey Girl and 10-1 Vivi's Book who dead-heated for third. 5-2 favorite Love Cove finished sixth.

Chestoria is a daughter of Chester House out of the Dixieland Band mare R D Fille and trained by William Badgett Jr.. She improved her record to 6 wins, 2 seconds, and 2 thirds in 18 starts, earning $333,116 for owner E El R Stable.

On to the Jim Dandy Stakes